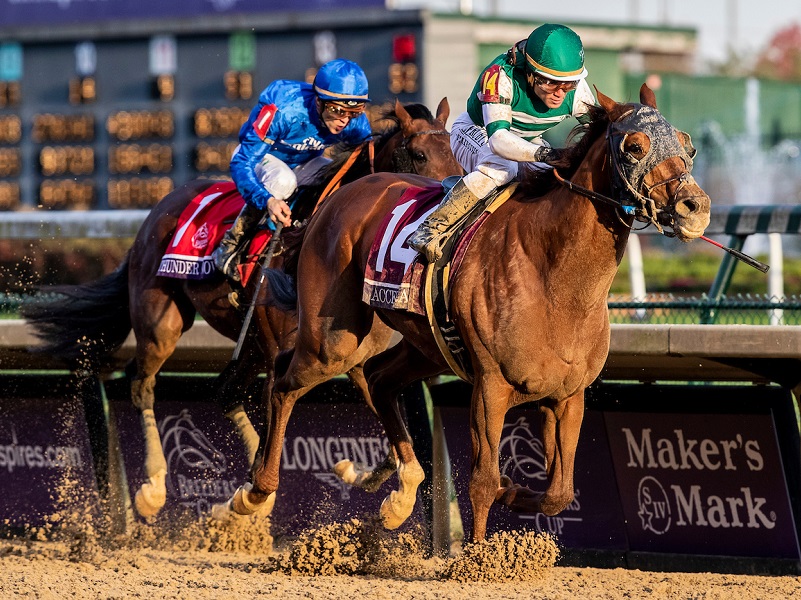 LOUISVILLE, Ky. (Nov. 3, 2018) – Hronis Racing’s Accelerate ($7.40) took command at the head of the stretch, turned back a bid from Thunder Snow at the three-sixteenths pole and then held off Gunnevera  by a length to win the 35th running of the $6 million Breeders’ Cup Classic (G1) for 3-year-olds and up before a crowd of 70,423 to climax the Breeders’ Cup World Championships at Churchill Downs on Saturday.

Trained by John Sadler and ridden by Joel Rosario, Accelerate covered the 1 ¼  miles in 2:02.93 over a fast main track.

The victory gave Sadler his first Breeders’ Cup triumph. “It was the ninth for Rosario and first in the Classic. It was the third victory of this year’s Championships for Rosario who won Friday’s Sentient Jet Juvenile on Game Winner and the Tito’s Handmade Vodka Juvenile Fillies on Jaywalk.

Accelerate is a 5-year-old Kentucky-bred son of Lookin At Lucky out of the Awesome Again mare Issues. It was the fourth consecutive Grade 1 victory for Accelerate who has compiled a 7-6-1-0 record in 2018.

Mendelssohn led the field of 14 through fractions of :22.68, :46.46 and 1:10.61 with McKinzie and West Coast stalking to his outside and Thunder Snow saving ground along the rail. Rosario had Accelerate in the clear and approaching the far turn made his move at the leaders. At the head of the stretch, Accelerate swooped to the lead with Thunder Snow moving to second to mount a short-lived challenge.

Gunnevera closed late to get second by three-quarters of a length over Thunder Snow, who saved third place by a nose over Yoshida.