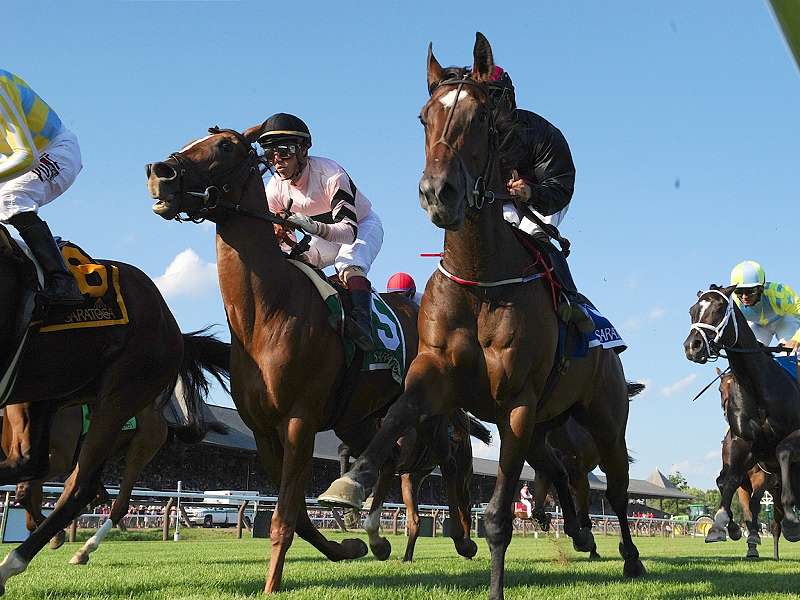 SARATOGA SPRINGS, N.Y. - Trainer Jimmy Toner will try for his third victory in Friday's Grade 3, $150,000 Lake George for sophomore fillies at 1 1/16 miles on the Mellon turf with the Grade 3-placed Defiant Honor. The Lake George joins the Grade 3, $150,000 Schuylerville, a six-furlong contest for 2-year-old fillies, to kick off the Opening Day racing action at Saratoga Race Course as the historic track opens the gates for its 149th meet.

The 10-race card will get underway with a first post of 1 p.m. The 99th running of the Schuylerville is carded as Race 8 with an approximate post of 5:02, followed by the 22nd running of the Lake George as Race 9.

Defiant Honor got back into action for the Toner barn last month following a nearly seven-month layoff, earning a one-length victory in her seasonal bow, a June 21 allowance at Belmont Park.

"She came out of her last race in good shape," said Toner. "So far, so good. She's a nice, classy individual. She likes the attention. She's still going through her stages of growing, but she's a nice filly to be around and she does everything the right way. She gives you everything you could ask for."

The Speightstown filly was impressive as a 2-year-old, posting a game two-length win to break her maiden in October and shipped east for the Grade 3 Jimmy Durante at Del Mar, where she finished second despite interference from foam drain covers that had blown onto the track before the race.

"They were all over the track and horses were going every which way," Toner said. "She had actually avoided them going into the turn but she stepped on one and slipped a little going onto the backside. That was a sight to see."

Defiant Honor, owned by Phillips Racing Partnership and Pam Gartin, got a prescheduled vacation at Darby Dan Farm in Kentucky before returning to training in Ocala, where an injury delayed her 3-year-old debut for Toner.

"She popped a splint after she got there [in Ocala], so we were a little further behind with her this year than we expected, but we've got her back into the game now and she's doing very well," he said.

Toner got his second Lake George victory in 2011 with Memories of Silver's gray daughter Winter Memories, who put her sustained late run to good use and rolled to a 4 ½-length win.

"Memories of Silver's race in the Lake George was a defining moment, I think, for her," said Toner. "That race, she split horses mid-stretch when Jerry Bailey was on her. He told me he didn't have time to go around, so he stuck her nose in there and went. She just started to separate those horses as she was going through there. It was an amazing feat, for both rider and horse. That was a huge race for her at the time; it showed her ability and character. That was an exciting race.

"Then we got to come back and win it with her daughter, Winter Memories, and that was exciting in itself," he continued. "She gave one of her patented late runs. She was impressive in the way she used to do things. She was so flashy making those runs and all that stuff, she was something else to watch run."

Defiant Honor will get the services of Hall of Fame jockey John Velazquez. The pair will break from post 3.

Meanwhile, Mark Casse's barn is looking to get the meet off to a sharp start with a trio of entries for the Lake George and a sharp maiden winner on tap in the Schuylerville.

Casse will be represented in the Lake George by Dream Dancing, third in the Grade 3 Wonder Again last time out, and Victory to Victory, looking to stretch back out after finishing fifth in the 6 ½-furlong Alywow on the grass at Woodbine on June 11.

Bobby Flay's stakes-placed Corporate Queen is entered for the main track only and is also likely to be supplemented into Sunday's Grade 1, $300,000 Coaching Club American Oaks, Casse said.

In the Wonder Again, Dream Dancing ran closer to the pace than her normal style but wasn't able to close on the pacesetting New Money Honey, who followed up with a win in the Grade 1 Belmont Oaks on July 8.

"We knew there wasn't any speed [in the Wonder Again] and we didn't want New Money Honey to get too far away from us," said Casse. "[Being near the pace] just isn't what she wants to do and I thought her performance was a bit lackluster. The good news for us is she's come back and trained extremely well so they'll be no excuses."

Victory to Victory, a Florida-bred by Exchange Rate, will lose the blinkers she has worn in her last four starts, which included a 2 ½-length win in the Grade 1 Natalma last fall, in hopes that the equipment change will get her to relax early.

"My concern with her after coming back this year off a layoff was that she was showing a lot of speed and we couldn't get her to rate," Casse said. "A lot of times when they do that, I'll shorten them up. I shortened her up [in the Alywow] and she just didn't have enough speed to be competitive going short, so we're going back to two turns. We took her blinkers off and we're hoping she'll settle a little better."

Dream Dancing, by Tapit, will break from the outside 11 post under Julien Leparoux, while Victory to Victory will be ridden by Florent Geroux from post 10.

Also entered in the Lake George is Wonder Again runner-up Fifty Five, looking to give trainer Chad Brown his third straight win in the race; Sweeping Paddy, who posted an 3 ½-length victory in the Grade 3 Regret for trainer Dale Romans last time out; Wild Applause winner Super Marina for the George Weaver barn; the Graham Motion-trained Party Boat, second in the Pennsylvania Oaks; and Proctor's Ledge, Chubby Star and Fizzy Friday, second, fourth and fifth in the Regret, respectively.

In the Schuylerville, Casse will saddle one of the stable's rising stars, Snowfire, fresh off her maiden-breaking debut on June 29 at Churchill Downs. A gray daughter of Tapit, Snowfire tracked the pace from the three path and fought off a challenge in the stretch en route to a four-length win.

"We're excited about her," he said. "I thought her first race was really good. We were able to breeze her here at Saratoga the other day and she went extremely well. We're expecting a big effort out of her. We're high on her, we think she's got a big future."