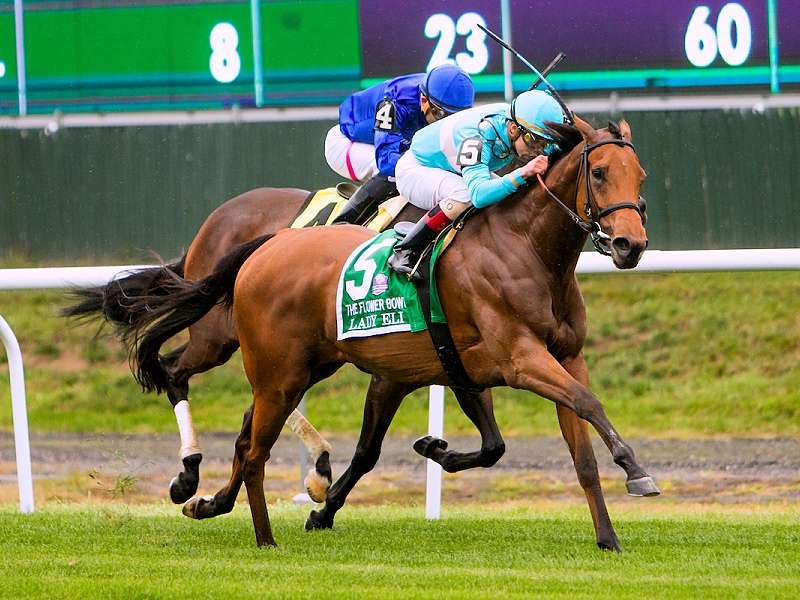 SARATOGA SPRINGS, N.Y. - Sheep Pond Partners' Lady Eli will look to make a triumphant return to Saratoga Race Course as one of two entries for trainer Chad Brown in the 79th running of the Grade 1, $500,000 Diana for fillies and mares 3-years-old and up on the turf on Saturday.

The Diana, the first of 18 Grade 1s on Saratoga's 40-day summer meet docket, will be the second of two back-to-back graded stakes on Saturday's card, following the 103rd running of the Grade 3, $150,000 Sanford in Race 9.

Brown will bid to repeat in the Diana following Dacita's victory last year. Lady Eli will attempt to get him back in the winner's circle, returning to the track where she won her debut in 2014. Brown said the 5-year-old Divine Park mare should be fresh coming off a half-length win in the Grade 1 Gamely on May 27 at Santa Anita Park.

Lady Eli has eight wins and three runner-up finishes in 11 career starts. She burst on to the scene with six straight wins to start her career, including the 2014 Grade 1 Breeders' Cup Juvenile Fillies Turf and the 2015 Grade1 Belmont Oaks Invitational.

After a 13-month layoff to recover from laminitis, Lady Eli returned to Saratoga with a game second-place effort in the Grade 2 Ballston Spa on August 27 and sandwiched wins in the Grade 1 Flower Bowl and the Gamely around runner-up efforts in the Grade 1 Breeders' Cup Fillies & Mare Turf and the Grade 1 Jenny Wiley.

"She's training super and has had adequate time between races after a long ship back from the Gamely and we're looking forward to running her again, especially at Saratoga where she broke her maiden and made her comeback last year," said Brown, who also saddled Diana winner Zagora in 2011.

"In the Gamely, she adapted to a slow pace and overcame it," he added. "It looks like there might be a slow pace in here as well. We're confident she can place herself where we need her. She likes the track here and the Diana is a special race for our team."

Lady Eli, who has posted triple-digit Beyer Speed Figures in five of her last six starts, drew post 3 with Irad Ortiz, Jr. aboard.

Her stablemate, Antonoe, is 2-for-2 in North American starts and is coming off an impressive win her graded stakes debut when she rallied from seventh for a win by three-quarters of a length over Sassy Little Lila in the Grade 1 Loninges Just a Game on Belmont Stakes Day, June 10.

Antonoe's first five career starts came in France and included a Group 3 win in the Prix d'Aumale. The Juddmonte homebred has four wins overall in eight starts and will be stretched out to the Diana distance of 1 1/8 miles for the first time.

"She was sent to me in really good shape; I'm not going to claim we did anything magical with her but we put her in our program and she's responded," Brown said. "She's a top-class horse. I was more concerned with the cutback [to one mile] in the Just a Game than to this. A mile-and-an-eighth is fine for her."

Jockey Javier Castellano, who rode Antonoe to both of her wins since shipping overseas, will have the return call from post 2.

Godolphin Racing's Dickinson won't have to trek far from the Greentree Training Center, where the 5-year-old Medagila d'Oro mare has been stabled since finishing third last out in the Just a Game. Dickinson had won her previous three starts: the Jenny Wiley over Lady Eli by a neck, the Grade 2 Hillsborough by a half-length score and the Grade 3 Suwannee River by 1 1/4 lengths.

Dickinson, who has five wins in seven career starts on the turf, is 2-for-2 at the Diana distance and will depart from the outside post with Paco Lopez aboard.

"She's training well and came out of her last race excellent," trainer Kiaran McLaughlin said. "She gives us great confidence because she's only been beaten twice on the turf and in her last race, she gave both the winner [Antonoe] and [Sassy Little Lila] eight pounds each. I have a lot of respect for both Antonoe and Lady Eli, but at least the weights are shifting in Dickinson's favor, so we'll see.

"The race doesn't seem to have a lot of pace, so that's a little of a concern," McLaughlin added. "Lady Eli going 1 1/8 miles last out was close to the front-end, so she might show pace. We'll leave it up to Paco, but she's been training great. She's here and will get to walk out of her own stall for a change."

Quidura will cut back in distance after earning a 100 Beyer for a second-place finish in the Grade 2 New York at 1 ¼ miles on June 9 at Belmont Park. The British-bred 4-year-old is 3-1-1 in six career starts, capping her 3-year-old campaign with a win in the Grade 3 Valley View in her graded stakes debut.

After making her first two career starts in Germany, Quidura has never finished off the board in North America. The Graham Motion trainee will break from post 4 with Junior Alvarado aboard.

Harmonize, for Hall of Fame trainer Bill Mott, is the third Diana starter to have also run in the Just a Game, finishing third. The 4-year-old daughter of Scat Daddy is seeking her first win since the 2016 Grade 1 Del Mar Oaks. In her five subsequent starts - all graded stakes - she has posted a pair of second-place finishes, with strong showings in the Grade 1 Queen Elizabeth II Challenge Cup and the Grade 2 Mrs. Revere.

Four-time Diana winner John Velazquez will ride from the rail.

Rounding out the field is My Impression, a stakes-tested veteran for fellow Hall of Famer Shug McGaughey. The 4-year-old Sky Mesa filly has won a graded stakes at the distance, capturing the Grade 3 Commonwealth Oaks on September 24. Jose Ortiz, who rode her to all three of her career stakes wins, will be in the irons.

"She runs good almost every time," McGaughey said. "Going a mile-and-an-eighth with Ortiz on her will help. She's trained good and had a good work on the turf the other day. She's lightly raced this year. She'll be right off of it [the pace], I would think."