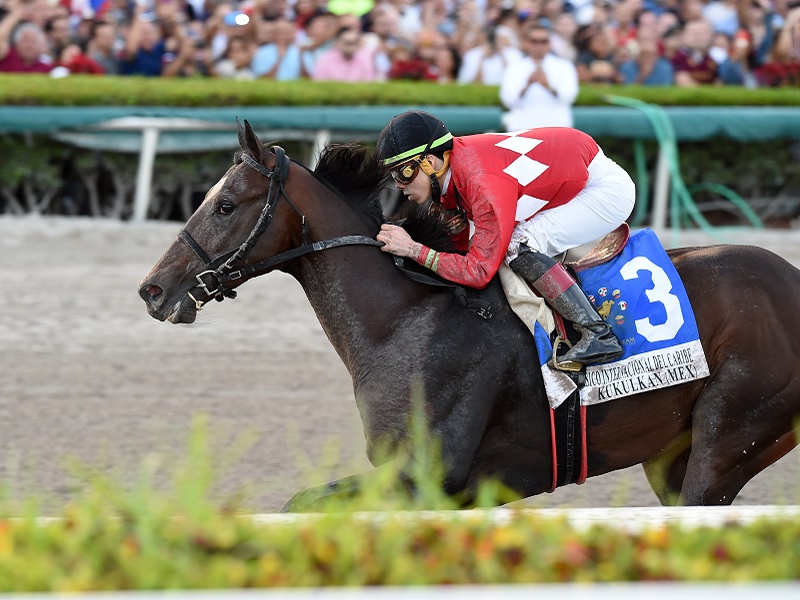 The Clasico del Caribe, a 1 1/8-mile stakes for 3-year-olds, brought down the house and the curtain on a most festive event for horses based in Latin America and the Caribbean.

Ortiz, who rode three winners during last year’s event, repeated the achievement Saturday with victories aboard Kukulkan, Puerto Rico’s Mishegas in the Copa Invitacional and Mexico’s Jala Jala, whom he rode to victory in last year’s Clasico del Caribe, in the Copa Confraternidad del Caribe.

“It’s great. I’m so happy to represent my country and Mexico too,” said Ortiz, a Puerto Rico native who is widely regarded as the frontrunner for this Year’s Eclipse Award as North America’s outstanding jockey. “It’s a pleasure to ride these kind of horses.”

“This is like a dream because this horse has a lot of quality. We spoke a few days ago about the capacity he has. This horse has a lot of stamina and he won very easy today. He ran not in his normal style or as he has before. Irad took him and relaxed and relaxed and when he decided to go, the horse went easily,” Gutierrez said. “He’s a very professional horse, his attitude in the paddock and with everyone in the stands. He’s a real racehorse. To make history and win two back to back with these horses is a dream.”

Ortiz rated Kukulkan fifth along the backstretch as Puerto Rico’s El Salsero set a comfortable pace on fractions of 24.50 and 49.03 for the first half-mile, closely stalked by Panama’s Sol De Orion and Kukulkan’s stablemate Kandinsky. Kukulkan advanced along the backstretch to approach the pacesetters before surging between horses to take the lead on the far turn without being asked by Ortiz. The son of Point Determined romped away to win as he pleased to complete the 1 1/8 miles in 1:54.80.