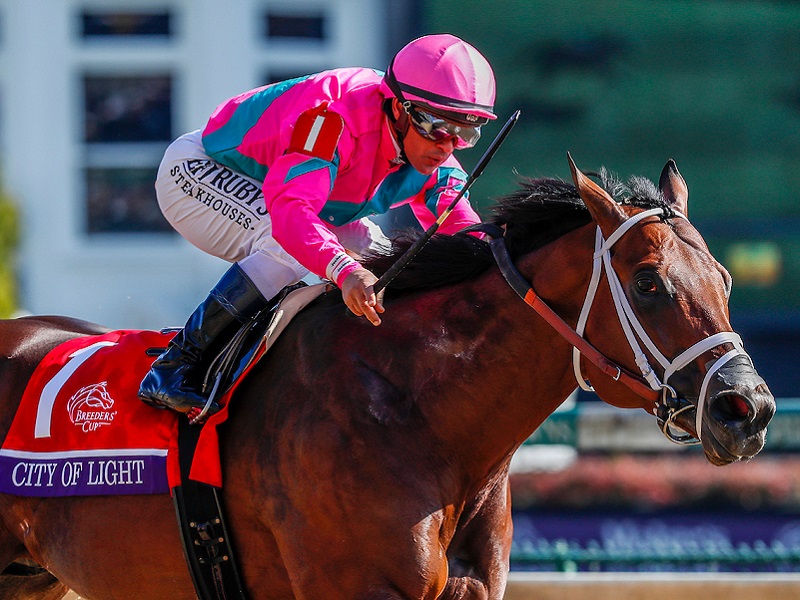 Trainer Mike McCarthy said Friday morning from his base at Santa Anita in Arcadia, Calif. that City of Light will make his 5-year-old debut in the 1 1/8-mile Pegasus, the richest Thoroughbred race in North America.

City of Light shows a pair of half-mile works over Santa Anita’s main track this month following his 2 ¾-length victory in the Breeders’ Cup Nov. 3, his third career Grade 1 triumph, which pushed his career earnings to $1,662,600 from 10 lifetime starts.

“The horse couldn’t have come into the Breeders’ Cup doing any better. After his work on the Sunday before, I was very confident that he would run his race and he did,” McCarthy said. “We’re very pleased with the way the horse came out of the Breeders’ Cup. He’s had a couple of nice works so far. We couldn’t be happier with the way he’s training, and we’re looking forward to taking part in the Pegasus.”

The Breeders’ Cup was City of Light’s third race outside California, the others also coming this year when he won the Oaklawn Handicap (G2) by a neck April 14 at Oaklawn Park and ran second to eventual Breeders’ Cup Sprint (G1) winner Whitmore in the seven-furlong Forego (G1) Aug 25 at Saratoga.

Eight of City of Light’s 10 races have come at a mile or less, though he does own a win at the Pegasus distance in the Oaklawn Handicap. He also finished third in the 1 ¼-mile Gold Cup at Santa Anita (G1) May 26.

“I think it’s well within him to get the mile and an eighth,” McCarthy said. “Gulfstream is a speed-favoring racetrack and he has plenty of that. He’s rateable, so hopefully we get a nice racetrack and everybody shows up doing the best they can on the day.

“This is what we get up for in the morning, to be able to participate in big races on big days,” he added. “It’s very exciting.”

The Pegasus will be accompanied by the inaugural running of $7 million Pegasus World Cup Turf Invitational (G1) on the Jan. 26 program in the newly created $16 million Pegasus World Cup Championship Invitational Series. Owners can secure a spot in the starting gate for the Pegasus for a $500,000 fee and will be given preference in purchasing a spot in the Pegasus Turf for $500,000. A $1 million bonus is being offered if an owner should win both races.

Already confirmed for the Pegasus are Hronis Racing’s Breeders’ Cup Classic (G1) winner Accelerate; Charles Fipke’s Grade 1 winner Seeking the Soul; Margoth’s Gunnevera, a multiple graded-stakes winner of more than $4 million in purses; and Calumet Farm’s pair of Bravazo and True Timber. Tabor, Magnier and Smith’s Coolmore has also purchased a spot for a horse to be determined.

Audible, the 2018 Florida Derby (G1) winner, is also being pointed to the Pegasus and will prep for the race in Saturday’s $100,000 Harlan’s Holiday (G3) at Gulfstream. Owned by China Horse Club International, WinStar Farm, Starlight Racing, and Head of Plains Partners, Todd Pletcher-trained Audible finished third in this year’s Kentucky Derby (G1).

Klaravich Stables and William Lawrence’s Patternrecognition, who defeated True Timber by three-quarters of a length in the Cigar Mile (G1) Dec. 1 at Aqueduct, and Stronach Stable homebreds Something Awesome, a multiple graded-stakes winning millionaire, and back-to-back stakes winner Unbridled Juan are also under consideration for the Pegasus.