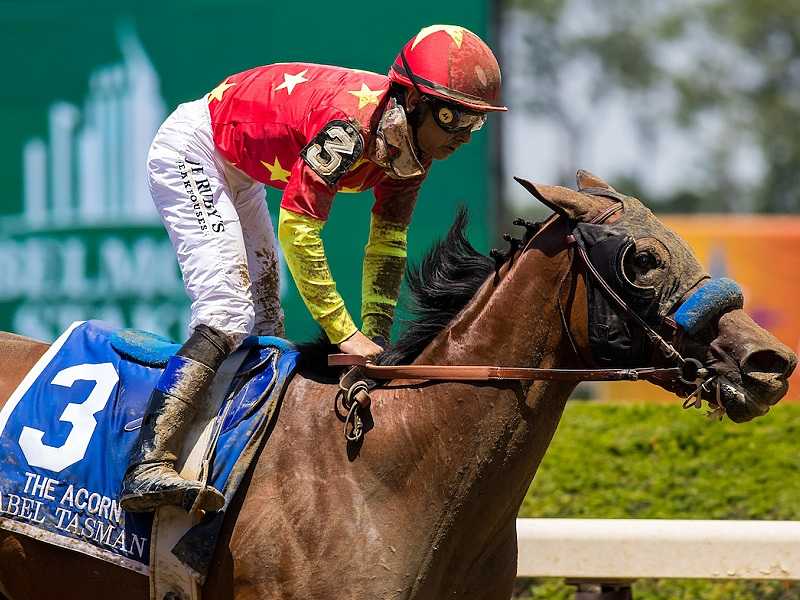 SARATOGA SPRINGS, N.Y. - This year's Grade 1, $300,000 Coaching Club American Oaks for three year-old fillies at 1 1/8 miles on Saratoga Race Course's hallowed main track will feature the 101st winning filly in its history at its conclusion. She will top a list of champions such as Shuvee, Ruffian, Sky Beauty, Songbird and many others who left their mark over the century-long race that began back at Belmont Park in 1917.

China Horse Club and Clearsky Farm's Abel Tasman is set to continue the winning form displayed in her late-closing kick to win the Grade 1 Acorn by a length under a heady ride by Hall of Fame rider Mike Smith on the Belmont Stakes Day undercard. It was her second victory since her six-wide late run in the slop to win the Grade 1 Kentucky Oaks.

Never worse than second with the exception of her debut through five starts, the daughter of Quality Road won the Grade 1 Starlet, and finished second in the Grade 3 Santa Ysabel Stakes before being transferred to Hall of Fame trainer Bob Baffert's care in early March. The Coaching Club American will be her fourth start for Baffert.

"She shipped well, everything is good," Baffert said. "She's been to the track a couple of days now. She's just got a really great mind. She's a real sweet horse to be around, just a lot of class."

After a slow start where she finished a distant second to runaway winner Paradise Woods in the Santa Anita Derby, Abel Tasman returned with blinkers in the Kentucky Oaks. She has yet to be beaten since the change.

"They made a big difference, and she's been training really well since. We ran her once, and I didn't want to change a thing. Mike said she really needs blinkers after the race, and he confirmed it when he worked her after, he said she changed. She was pretty good before that."

Abel Tasman, named after a 1600s Dutch explorer, is eligible to sweep the Triple Tiara - a win in the Acorn, Coaching Club American Oaks and Grade 1 Alabama Stakes on August 19 at the Spa. No filly has won the Triple Tiara since the series was reconfigured in 2010.

Abel Tasman's ninth career start will be from post 2, where she will be joined by Smith.

Salty, representing owners Gary Barber, Baccari Racing and Chester Prince will face Abel Tasman for the third time after finishing a length behind as the runner-up in the Acorn. It was the second time Abel Tasman got the upper hand on Salty after a rough, wide trip put the Quality Road filly out of contention in the Kentucky Oaks. The Mark Casse trainee settled for a fifth-place performance over the sloppy Churchill Downs oval.

"She's doing great," Casse said. "We're excited. She's doing better than ever, had a nice work over the track. It's a rematch. We definitely want another chance, and it looks like we're going to get it. If Abel Tasman beats us, then I tip my cap to her and Bob. We talk a lot, and I have the utmost respect for Bob. I think the more respect you have for somebody the more you want to beat them."

Salty will be one of three Casse will saddle as Bobby Flay's Corporate Queen, third in the Grade 2 Black Eyed Susan, and sixth in the Grade 3 Wonder Again will join Gary Barber's Summer Luck, who enters off a third-place finish in the Grade 3 Regret Stakes.

"If it gets a little wet, it will help Corporate Queen, and I think Summer Luck will enjoy the mile and an eighth. There's not a lot of speed in the race, but it looks like both Abel Tasman and Salty will go at it early. It might be a lot like this year's Preakness."

Salty will run from post 7, and gets Joel Rosario in the saddle. Corporate Queen drew post 4 with jockey Irad Ortiz, Jr., and Summer Luck will race from post 5 with Javier Castellano getting the call.

Normandy Farm's Daddy's Lil Darling returns off her fourth-place finish in the Grade 1 Belmont Oaks Invitational, and was another who had been unable to match Abel Tasman in the Kentucky Oaks after a game second-place finish in the Grade 1 Ashland at Keeneland. The Scat Daddy filly will make her sixth Grade 1 start for trainer Ken McPeek, and is in search of her first Grade 1 victory.

Daddy's Lil Darling will break from post 3 with jockey Julien Leparoux aboard.