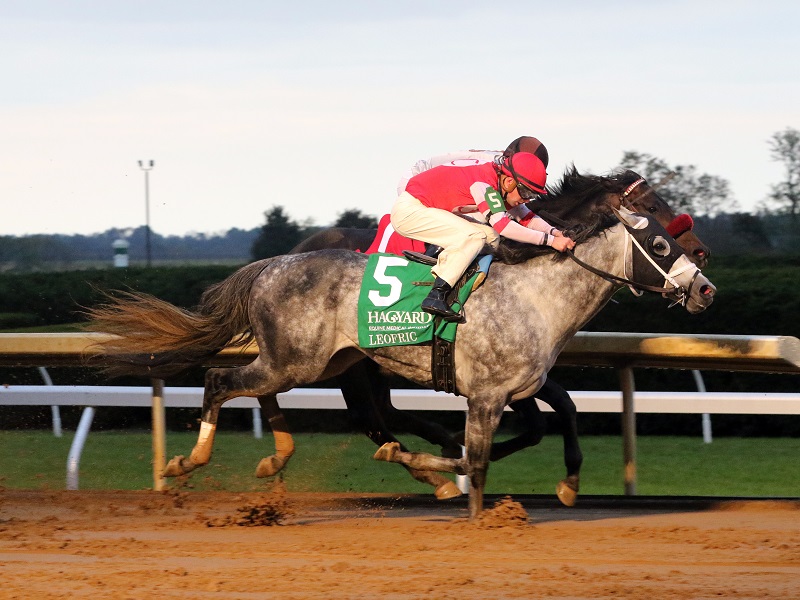 Steve Landers Racing’s 8-5 second choice Leofric outbattled Southern California invader Prime Attraction to prevail by a head and win the 61st running of the $200,000 Hagyard Fayette (G2) on closing day of Keeneland’s 17-day Fall Meet before a crowd of 14,927.

Trained by Brad Cox and ridden by Florent Geroux, Leofric tracked pace-setting Prime Attraction through fractions of :24.80, :48.97 and 1:12.74. Geroux shifted Leofric into the three path in the far turn and dueled with Prime Attraction and jockey Kent Desormeaux down the lane before pushing his head in front of that rival at the finish.

Leofric covered the 1 1/8 miles in 1:49.87 and earned $120,000 to increase his bankroll to $650,340 with his seventh victory in 13 starts. The Hagyard Fayette win marked Leofric’s fourth victory in six starts this year. He has competed at five race tracks in 2018, scoring his first stakes victory two races ago in the Aug. 4 West Virginia Governor’s (G3) at Mountaineer.

A graduate of two Keeneland sales, Leofric is a 5-year-old son of Candy Ride (ARG) out of the Unbridled’s Song mare Lady Godiva.

Hence ran fourth and was followed in order by Rated R Superstar, favored Hofburg and Scuba.