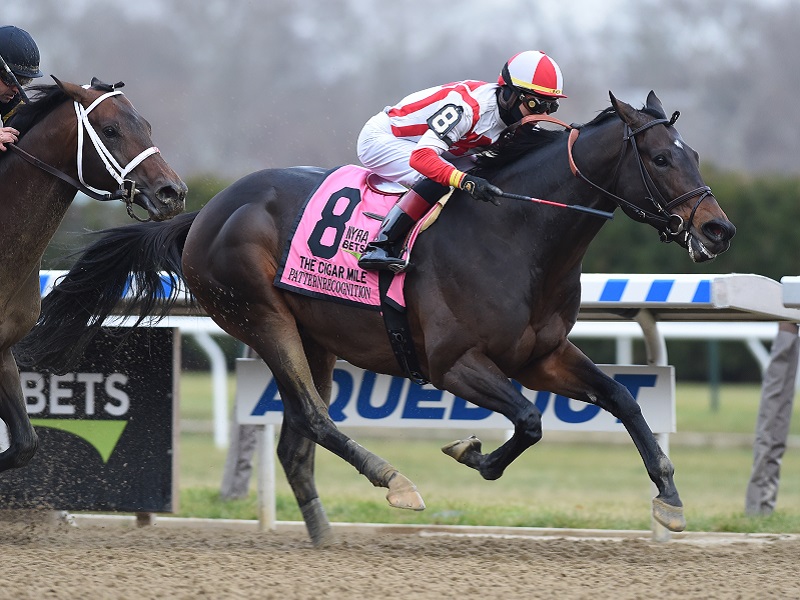 OZONE PARK, N.Y. - Patternrecognition continued a winning trend by notching his third victory in succession with a powerful front-running performance to capture the 30th renewal of the Grade 1, $750,000 Cigar Mile Handicap presented by NYRA Bets on Saturday at Aqueduct Racetrack.

Trained by Chad Brown for owners Klaravich Stables and William Lawrence, the 5-year-old Patternrecognition was making just the second stakes start of his career, fresh off a one-length score in the Grade 2 Kelso at Belmont Park, and demonstrated a considerable amount of class to best a talented eight-horse field that included Grade 1 winner Mendelssohn and the upwardly mobile Copper Town.

Sent to post at odds of 5-1 under Jose Ortiz, who celebrated the birth of his second child, Derek, in the early hours of Saturday morning, Patternrecognition fired out of the gate and assumed command through splits of 22.88 seconds for the opening quarter-mile and a half-mile in a sharp 45.68 under pressure from Pat On the Back. Mendelssohn, with Ryan Moore up from the inside post, tracked from third position just inside of True Timber as three-quarters passed in 1:09.68.

Pat On the Back was asked for more into the final turn as True Timber launched his bid with Copper Town, who was compromised leaving the gate after Stan the Man stumbled, following their lead. However, Patternrecognition, traveling smoothly throughout, continued to find more, improving his lead to a 1 1/2 length advantage at the top of the lane.

True Timber battled bravely to the wire with Sunny Ridge finding his best stride late up the wood, but there was no catching Patternrecognition who earned a three-quarters of a length win in a final time of 1:34.98. True Timber completed the exacta, a length in front of Sunny Ridge. Mendelssohn, the 8-5 mutuel favorite, stayed on for fourth. Stan the Man, Timeline and Copper Town completed the order of finish.

Patternrecognition, by Adios Charlie, was a $420,000 purchase at the 2015 Ocala Breeders' Sale. He made his belated debut a winning one in April of his 4-year-old season and has proven to be worth the wait for his connections.

"Obviously, he's had some soundness issues along the way and I want to thank the owners as well, Seth Klarman and Bill Lawrence, for never giving up on this horse," said Brown, who captured the 2016 Cigar Mile with Connect. "He needed the time and they gave him the time to always get healthy when we needed to rest the horse. Ultimately, he showed the talent that we thought he had when they bought him what seems like forever ago as a 2-year-old and this is really a great moment for this horse. He deserves it.
"Because he's had so many interruptions in his schedule, I was always trying to bridge him to a longer race off a sprint and it was always hard to get there because he always had a setback," continued Brown. "Finally, he got very sound, to where I could train him consistently and get him out to that mile distance where his father [Adios Charlie] was very effective, as well. This horse is a rare horse. He's got that speed and he can carry it. I'm very proud of the judgment Jose used today. I left it up to him and the fractions concerned me a touch, but this horse showed his heart."

Ortiz, who was winning the Cigar Mile for the first time, said he made a snap judgment to take the lead with Patternrecognition.

"He broke out of there very sharply. The way he broke, I didn't want to give the lead away, so I used my own judgment and took a shot and went straight to the rail and took the lead," said Ortiz. "He got pressured pretty good. I took a big risk because those weren't the instructions, but it worked out."

True Timber, trained by Kiaran McLaughlin for Calumet Farm, was impressive in making his Grade 1 debut fresh off a good second in the Grade 3 Bold Ruler Handicap.

"We're very happy with the way he ran and how everything went," said McLaughlin. "We were pleasantly surprised. That was a great effort, so we have options going forward."

Mendelssohn, trained by Aidan O'Brien, arrived at the Cigar Mile in search of his first Grade 1 win on dirt. The well-bred son of Scat Daddy, a half-brother to champion mare Beholder and leading sire Into Mischief, captured the Grade 1 Breeders' Cup Juvenile Turf to complete his 2-year-old campaign and was among the leading contenders for the Kentucky Derby after romping to a 18 ½-length score in the Group 2 UAE Derby in March.

A troubled trip saw Mendelssohn finish last of 20 in the Run for the Roses, but the colt redeemed himself over the summer with on-the-board efforts in the Grade 3 Dwyer when third, the Grade 1 Runhappy Travers when second and a strong third in the Grade 1 Jockey Club Gold Cup.

The talented bay was turning back in distance in the Cigar Mile from a fifth-place run in the Grade 1 Breeders' Cup Classic.

"I kind of think nothing has really gone his way at all, all year. We'll see what the plan is," said Moore. "I think there's more in there at some point. I don't think [the kickback] affected him. I was just seeing what happens [out of the gate]. If no one was going, then we'd go to the lead, but I was happy. We had a nice run, really."

Patternrecognition, bred in Florida by Ocala Stud, banked $433,125 in victory while improving his record to five wins and five seconds from 11 career starts. He paid $12.80 to win.