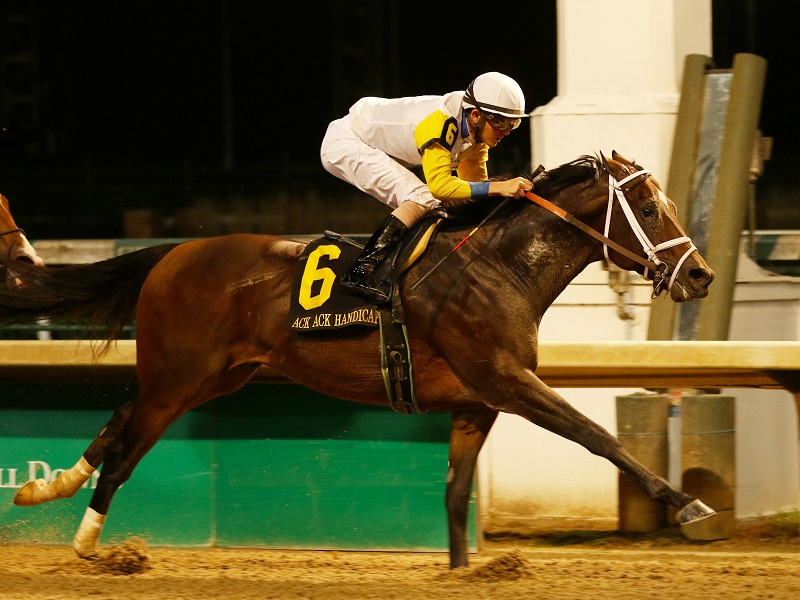 Charles Fipke’s homebred Seeking the Soul could be headed to the Breeders’ Cup World Championships on Nov. 3 at Churchill Downs after scoring a 1 ¼-length victory over Nice Not Nice and Giant Expectations in Saturday night’s 26th renewal of the $100,000 Ack Ack Presented by GE Appliances (Grade III) beneath the historic Twin Spires.

Seeking the Soul, ridden by Brian Hernandez Jr. and trained by Dallas Stewart, ran one mile in 1:35.01.

C. Z. Rocket, the 6-5 favorite in the field of six, and Churchill Downs Racing Club’s Warrior’s Club set a slow early pace – :24.03 for the first quarter mile and :47.63 for the half – as Seeking the Soul raced only a couple of lengths back while in the clear mid-pack.

“I think the slower pace helped me today,” Hernandez said. “I was able to keep up close to the pace and the leaders didn’t get away from me.”

Seeking the Soul commenced his winning move around the turn, took over at the top of the lane and repelled challenges from Nice Not Nice, Giant Expectations, C. Z. Rocket and Awesome Slew, who all made bids and chased the eventual winner. Warrior’s Club faded to last.

“This horse is a Grade I winner and he showed it tonight,” Hernandez said. “I have always been confident in him.”

Prior to the Ack Ack, Seeking the Soul finished 13th in the $750,000 Woodward (GI) over 1 1/8 miles at Saratoga on Sept. 1. After running third in last year’s Lukas Classic, Seeking the Soul won a 1 1/16-mile condition allowance at Keeneland and then scored in the $500,000 Clark Handicap (GI) at Churchill Downs in late November.

“It looks like we have some decisions to make now,” Stewart said. “We’ll definitely look at the Breeders’ Cup but we’ll decide on the Dirt Mile or Classic. Mr. Fipke is simply a great owner. He’s a great person to work with and this night is absolutely awesome. We’re here with family and friends and we get to celebrate a great horse.”

For Hernandez, it was his third Ack Ack win after previous riding Neck ’n Neck (2012) and Tom’s Ready (2016) to victories. Stewart was the trainer of the latter.

The race is named in honor of Cain Hoy Stable’s 1971 Horse of the Year Ack Ack, who is enshrined in the National Museum of Racing and Hall of Fame. In his only Churchill Downs appearance, Ack Ack won the 1969 Derby Trial in 1:34.40 which was a track record for one mile that has since been eclipsed.