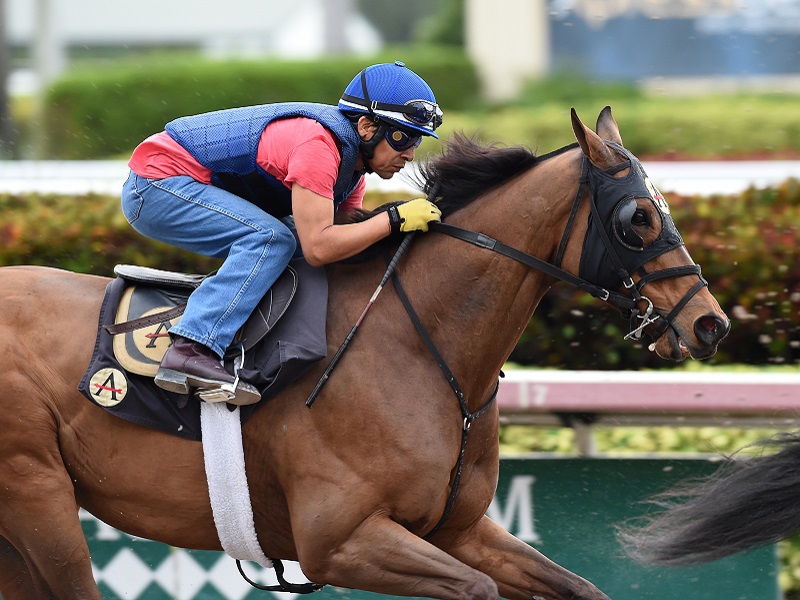 HALLANDALE BEACH, FL – Stronach Stables’ millionaire homebred Something Awesome breezed Saturday morning for the first time since arriving in South Florida ahead of his next scheduled assignment in the $9 million Pegasus World Cup Invitational (G1) Jan. 26 at Gulfstream Park.

Hall of Fame jockey Edgar Prado was aboard as multiple graded-stakes winner Something Awesome went one mile in 1:42 over Gulfstream’s main track. Prado will ride in the 1 1/8-mile Pegasus, the richest race in North America.

“I had another horse at the half-mile pole and they finished together,” trainer Jose Corrales said. “He did it very comfortable. Everything looks good.”

It was the first work for Something Awesome since going 1 1/8 miles in 2:01 at his home base of Laurel Park Dec. 15. He shipped to Gulfstream on Christmas Day and has been getting acclimated to his surroundings.

Something Awesome won five of his first six starts since joining Corrales in the fall of 2017, including victories in the seven-furlong General George (G3) and Harrison E. Johnson Memorial at Laurel and $1.2 million Charles Town Classic (G2), the latter two at 1 1/8 miles.

The 8-year-old Awesome Again gelding has made one start since the Pimlico Special (G3) May 18, finishing second to Maryland Coalition Stakes winner Colonel Sharp in an open seven-furlong allowance Nov. 16 at Laurel. Colonel Sharp came back to win the Dave’s Friend Stakes Dec. 29.

Overall, Something Awesome has nine wins and $1.093 million in purse earnings from 26 career starts. He has raced twice previously at Gulfstream, running third in a pair of seven-furlong optional claiming allowances Jan. 7 and Feb. 17, 2017.

Also working for Corrales Saturday at Gulfstream was another Stronach Stables homebred, 7-year-old gelding Unbridled Juan, who went seven furlongs in 1:04.44. Winner of the Richard W. Small and Grover ‘Buddy’ Delp Memorial Stakes in his last two starts, he is being considered for the $7 million Pegasus World Cup Turf Invitational (G1), the richest grass race in North America.

“He did OK. Everything is good with him,” Corrales said. “I think with the way he’s training, he can compete in that kind of race.”