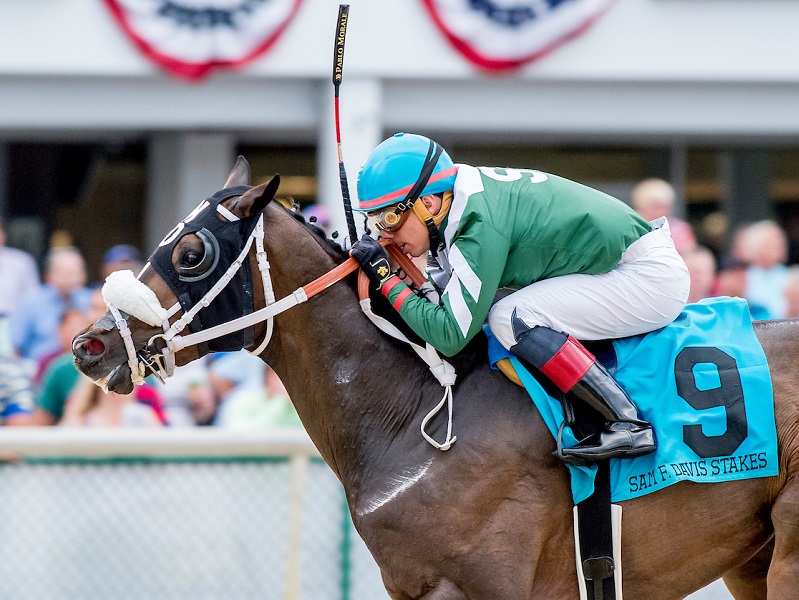 Trainer Kathleen O’Connell scored one of the biggest upsets in Tampa Bay Downs history in 2011 when she saddled 43-1 shot Watch Me Go to win the Grade II Tampa Bay Derby.

Today’s Grade III, $250,000 Sam F. Davis triumph with 3-year-old gelding Well Defined was nowhere near as shocking, but it was equally gratifying for the Tampa Bay Downs-based trainer, her legion of fans and the huge following owned by jockey Pablo Morales, who helped engineer the upset.

“That’s very, very special to do it at Tampa Bay,” an emotional O’Connell said after Well Defined’s two-and-three-quarter length victory from a charging Kentucky Wildcat in 1:42.70 for the mile-and-a-sixteenth, .26 seconds off 2018 winner Flameaway’s stakes record. So Alive finished a distant third, with the 19-10 favorite, Knicks Go, getting nipped for fourth at the wire by Counter Offer.

“He’s had little things that have happened and he’s grown up mentally and physically, and today he showed up with his game face on,” O’Connell said of the Florida-bred Well Defined, a son of With Distinction by Fru Fru, out of Medaglia d’Oro. “I like this horse a lot and the decision (on what’s next) will be up to the owners (Gilbert and Marilyn Campbell’s Stonehedge, LLC), but we just want him healthy. Maybe the (Grade II, $400,000 Lambholm South Tampa Bay Derby on March 9) – who knows.”

Kentucky Wildcat was vanned off after the race. Later, trainer Tom Albertrani reported that the colt was bearing weight and resting comfortably but would be transported to a clinic in Ocala for observation.

In the day’s non-graded stakes, the $150,000 Suncoast Stakes, Point of Honor turned on the jets in the stretch to triumph under Castellano, perhaps stamping herself as a Kentucky Oaks candidate.

Well Defined improved to 3-for-7, with the $170,000 winner’s share of the purse increasing his career bankroll to $490,570. He appeared to tire in each of his last two starts, the Sentient Jet Breeders’ Cup Juvenile and the Mucho Macho Man Stakes at Gulfstream, but O’Connell said he had excuses each time.

“His rear end slipped out from underneath him in the Breeders’ Cup Juvenile,” she said, “and he was compromised on early position when he ran in the Mucho Macho Man and got bottled up inside. He’s a young horse who is improving, mind-wise and everything-wise.”

Getting a word from Morales is never difficult, except when he is stopping to accept congratulations from well-wishers on his walk back to the jockeys’ room. He was still floating on a cloud in the 12th and final race on the turf, en route to another victory on 10-1 shot Funny Questions, even as observers wondered how he possibly had time to pose for pictures, get interviewed and change silks after the Sam F. Davis.

“(Well Defined) has a ton of natural talent and I was going to take advantage of that today,” Morales explained. “I wasn’t too worried about where I was going to be because we were really lucky with the draw position on the outside, so I figured I was going to ride a cool race.

“The horse is naturally fast and has a super-long stride, so I was going to come out running, but if somebody wanted to take the lead, I was OK with that,” Morales said. No one did, and he stretched the lead to three lengths from Knicks Go up the backstretch.

“All I wanted to do was ride a cool and collected race and keep my horse running,” Morales said. “I didn’t feel like I was going that fast at all, and my horse was going as comfortable as he possible could.

“I knew he was doing it relaxed and very much on his own. I had a lot of horse going into the second turn, so I figured I was going to ask him a little more and not wait for them to get me. If they were going to catch me, they were really going to have to come running.”

“Albin said he was getting out a little around the turn, so I don’t know what to make of that,” Colebrook said. “It looked like he had dead aim and then he kind of flattened out. It didn’t go the way we wanted, but hopefully there will be another day.”