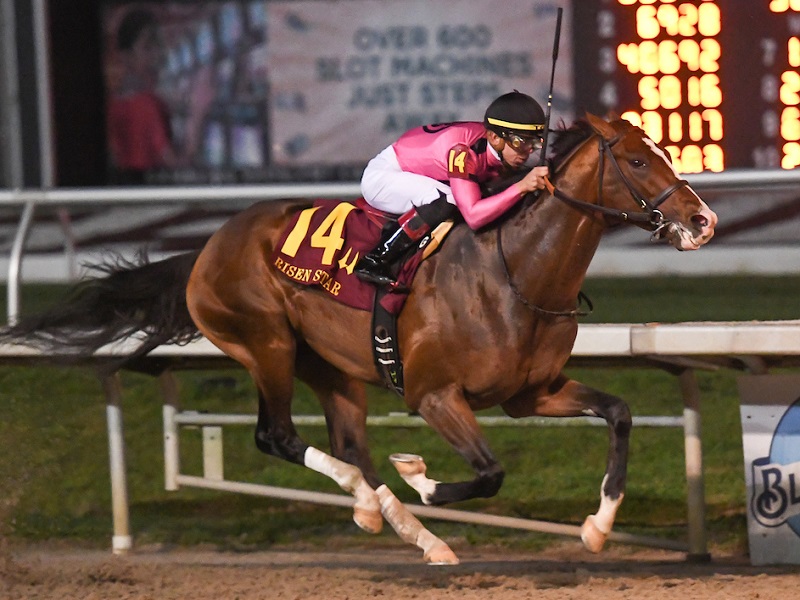 Gary Barber’s War of Will had to work a bit harder than he did last couple of times, but nevertheless he once again proved that he was the best when garnering up another victory on the Road to the Kentucky Derby in Saturday evening’s Grade II $400,000 Risen Star Stakes Presented by Lamarque Ford at Fair Grounds Race Course & Slots.

Breaking from the far outside thorough post 14, jockey Tyler Gaffalione used the 3-year-old son of War Front a bit coming out of the gate in order to get the right position, was four wide going into the first turn and sat right off of pacesetter Gun It who recorded opening fractions of 23.71 and 43.36. Just inside the three-eighths, War of Will established command and edged clear at the quarter pole. Gaffalione urged War of Will the whole way down to the wire but he was still able to get the job done and won by 2½ lengths in a time of 1:44.59. Country House was a green but a willing second while Roiland close late for third.

“The horse broke well today,” Gaffalione said. “I had the horse inside, Dunph, going to the lead and then (Gun It) showed a little bit of speed. When I saw they were intent on going I just tried to get him back and got him to relax. He came back to me nicely and settled well down the backside. Got a little keen going into the far turn and wanted to move a little early. But I didn’t want to take too much away from him so I tried to sit as long as I could. He was waiting on horses down the lane but I kept him at task and there was plenty of horse there.”

The Risen Star was Gaffalione’s third time aboard War of Will. He piloted the colt for trainer Mark Casse in his five-length maiden special weight victory at Churchill Downs in November as well as the Grade III Lecomte Stakes, which he won by four lengths.

“Mark and his team have done a great job,” Gaffalione said. “They’ve had a ton of confidence in this horse the whole way. It’s just an honor to be able to ride the horse. He’s just so professional, trains great and he’s a pleasure to be around.”

The Risen Star Stakes victory gave War of Will 50 qualifying points on Churchill Downs’ Road To The Kentucky Derby. He is now atop the Leaderboard with 60 total points. He earned 10 when he won the Lecomte last month.

“For a big horse, he has tremendous speed,” Casse said. “He had to hit the gas a little to get over so that got him a little riled up. It’s like hitting the gas and trying to hit stop. They’re not as easy to stop as a car. He got him rolling and probably made the lead a little earlier than we would have liked. He’s done this a few times early on. When he gets the lead, he starts wandering. If he keeps winning there will be some big targets for him to chase.”

Casse stated that the Grade II $1 million Twinspires.com Louisiana Derby on March 23 would likely be War of Will’s next target.

“As long as he’s happy and healthy that’s where we’ll go and then we’ll talk about it from there,” Casse said. “I think (Fair Grounds) is a wonderful place to get a horse ready for the classics. We have right now four or five Derby horses and our two major Derby horses are here right now. I think a lot of that. I have David Carroll who I have utmost respect for so that’s important for me. Last year we almost won the Kentucky Oaks with Wonder Gadot and she stabled here. It’s a great place, it’s nice and the weather isn’t bad. Horses stay happy and safe here for the most part.”

Now unbeaten in three starts over the main track, War of Will has earned a total of $491,569 in lifetime earnings having collected $260,000 from winning the Risen Star.

Purchased by Casse’s brother Justin from the Arqana Two-Year-Olds In Training Breeze Up Sale in France last May for $298,550, War of Will is out of the Sadler’s Wells broodmare Visions of Clarity (Ire.) who is a half-sister to 1997 Grade I Breeders’ Cup Mile winner Spinning World. Visions of Clarity also produced Pathfork – the winner of the Group 1 Vincent O’Brien National Stakes at The Curragh in 2010. Other members of his family include Grade I turf winners Good Journey and Denon as well as Aldebaran – a three-time Grade I winner on dirt.