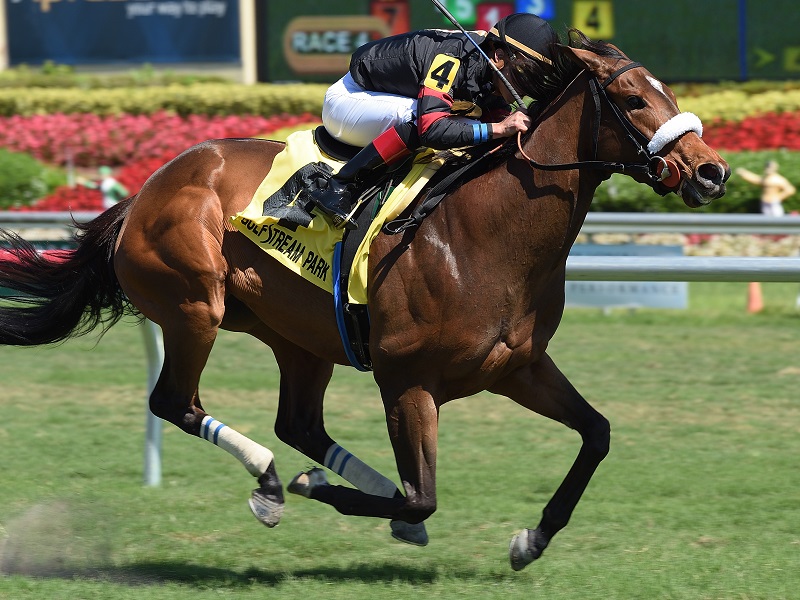 HALLANDALE BEACH, FL – Stronach Stables’ homebred Holy Helena, a Canadian classic winner at 3, returns to the site of her first graded-stakes triumph attempting to become the first two-time winner of the $150,000 The Very One (G3) Saturday at Gulfstream Park.

The 31st running of the 1 3/16-mile The Very One for older female turf horses is among nine graded-stakes worth $1.65 million in purses on a blockbuster 14-race program featuring the $400,000 Xpressbet.com Fountain of Youth (G2), the next step on the road to the $1 million Xpressbet.com Florida Derby (G1) March 30, and 2018 champion juvenile filly Jaywalk’s seasonal debut in the $200,000 Davona Dale (G2).

After six starts over dirt and synthetic surfaces including a victory in the 2017 Queen’s Plate, Canada’s version of the Kentucky Derby (G1), Holy Helena was moved to the turf by trainer Jimmy Jerkens last winter to open her 4-year-old season. She responded with three straight victories, two over the Gulfstream course, the second by 1 ¾ lengths in the The Very One.

Holy Helena, the daughter and granddaughter of Hall of Famers Ghostzapper and Holy Bull, respectively, capped her win streak in the 1 3/8-mile Sheepshead Bay (G2) at Belmont Park, her most recent victory. She has gone winless in six subsequent starts, five in graded-stakes.

“That was bad luck. She was probably the best horse in the race [Via Borghese], but that filly came back and won again and she’s run good in all her starts since coming here,” Jerkens said. “Last time, she just couldn’t accelerate when she really needed to. But, she’s been doin good since so we’ll take another shot.”

Meet-leading rider and 2018 Eclipse Award champion Irad Ortiz Jr., aboard in the La Prevoyante, gets a return call from Post 3 at 119 pounds.

“She’s been training good, she’s carrying good flesh, and we’ve got the top jock,” Jerkens said. “The barn we had a little bit of a bad month in February so that’s always in the back of your mind when you’re running, but you can’t let it affect you.”

A & A Farm’s Grade 3 winner A. A. Azula’s Arch closed from far back to be fourth, beaten 2 ½ lengths, in the La Prevoyante, her third straight race in graded company and third on the turf from 11 career starts. The Kevin Attard trainee was a gutsy neck winner of the 1 ¼-mile Maple Leaf (G3) over Woodbine’s synthetic surface in November.

“She’s a nice filly. We were expecting a good race out of her that day and she definitely ran that way,” Attard said. “She’s come out of the race in good shape. She’s had a couple of interim breezes and breezed well so I’m pretty happy with the way she’s going. She seems like she really likes Gulfstream here and has settled in really well.”

Attard was especially encouraged by the way A. A. Azula’s Arch finished in her first attempt over a yielding course in the La Prevoyante, where she was sent off at 49-1 odds in the field of 12.

“I was definitely very pleased with the way she closed ground and I thought once she got to the outside she did her best running,” Attard said. “I think she may have opened up some eyes after her last race, definitely, but I think people are still going to be on the fence a little bit wondering if it was a fluke or not. I think she’s got talent. She’s obviously now a 3-year-old filly that just turned 4 and is still maturing, still growing. She’s taken all those steps in the right direction so we’re expecting a good year from her.”

Two-time defending Championship Meet leading rider Luis Saez will be in the irons from Post 8 at topweight of 123 pounds.

Jon A. Marshall’s Tricky Escape is a three-time Grade 3 winner who was within a length of the lead while third in the La Prevoyante before tiring to be fifth in her first try over the Gulfstream course. The 6-year-old mare kicked off a three-race win streak last summer in the Robert G. Dick Memorial (G3) and capped in the Ramsey Farm Stakes.

“She didn’t run a bad race last time. I think right now she’s way better than she was then. I’m really happy with where she’s at right now coming into this race. I expect her to run real good,” trainer John Servis said. “This girl’s a runner. She’s a real nice filly.”

Regular rider Chris DeCarlo will be aboard Tricky Escape from Post 7 at 121 pounds.