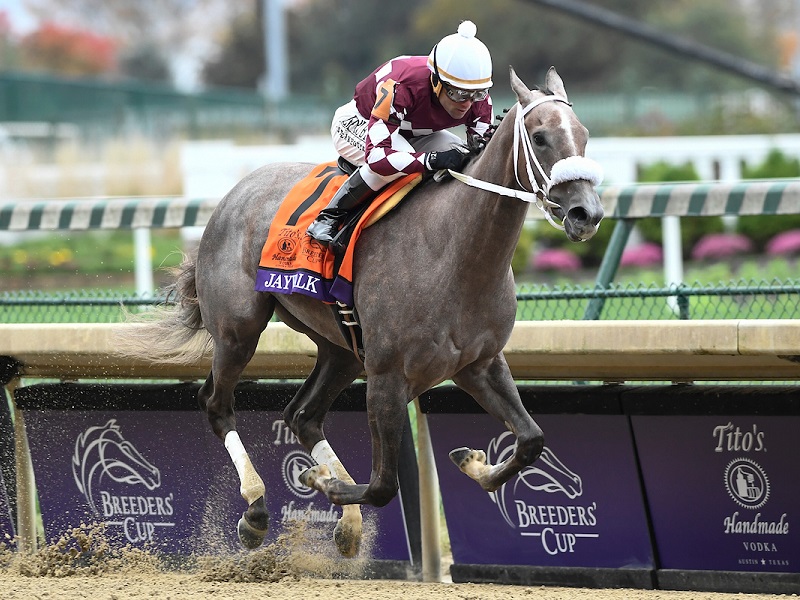 HALLANDALE BEACH, FL – Cash is King and D.J. Stable’s Jaywalk, the champion 2-year-old filly of 2018, will garner plenty of attention as she makes her highly anticipated sophomore debut in Saturday’s $200,000 Davona Dale (G2) at Gulfstream Park.

The 32nd running of the one-mile Davona Dale for 3-year-old fillies is among nine graded-stakes worth $1.65 million in purses on a blockbuster 14-race program topped by the $400,000 Xpressbet.com Fountain of Youth (G2), the next step on the road to the $1 million Xpressbet.com Florida Derby (G1) March 30.

Jaywalk, the 2-5 morning-line favorite, has not raced since stretching her win streak to four races with a 5 ½-length romp in the Breeders’ Cup Juvenile Fillies (G1) Nov. 2, cementing her Eclipse Award. It was the first such title for D.J. Stable’s Leonard Green, proprietor of The Green Group accounting and tax firm who has owned and bred Thoroughbreds for three decades.

Three years ago, Cathryn Sophia used season-opening wins in the Forward Gal (G2) and Davona Dale at Gulfstream as a springboard to victory in the Oaks. Jaywalk enters the Davona Dale having had six works since mid-January at Palm Meadows, Gulfstream’s satellite training facility in Palm Beach County.

“She hasn’t grown a whole lot. The time off did her a lot of good, though, I think mentally,” Servis said. “She put on a little bit of weight. I’m really happy with where she is right now, so it was mission accomplished.”

Jaywalk didn’t get to the racetrack until halfway through her juvenile season, finishing second in a five-furlong maiden special weight at Monmouth Park. Back at her home base of Parx, she graduated by 7 ½ lengths in front-running fashion July 24, then captured the White Clay Creek in her stakes debut at Delaware Park.

From there, the gray or roan daughter of 2013 Whitney (G1) winner Cross Traffic sprung a mild upset of the one-mile Frizette (G1) at Belmont Park, foreshadowing her Breeders’ Cup performance. Both wins came under jockey Joel Rosario, who returns to ride Saturday from the rail at topweight of 122 pounds in the field of seven.

“I knew she was a nice filly; how nice I didn’t know. To think that she was going to win two Grade 1s and be a champion? No way,” Servis said. “It was an incredible year. She showed us that she’s a really good filly. She deserved the time off she got. I’m real happy with the way she’s come back and excited to get her going.”

While Smarty Jones put Servis on the national radar, he has also enjoyed success with such top females as Cathryn Sophia, 2000 Alabama (G1) winner Jostle, 2005 Acorn (G1) winner Round Pond and 2018 Barbara Fritchie (G2) winner Ms Locust Point. The trainer puts Jaywalk is a class of her own.

“She doesn’t really remind me of anybody I’ve had. She’s so different,” he said. “She’s not a great, big, robust filly. Jostle was a big, strapping filly. Cathryn was big and she was stout. This filly is neither. This filly is not real big and she’s not real stout; she’s kind of aerodynamic, I guess. She has that ability to just turn on that cruising speed and she seems to just run horses off their feet.”

The Davona Dale will be the sixth career start for Jaywalk, all over different racetracks. She cuts back to a sprint distance for the first time since the 5 ½-furlong White Clay Creek, having gone one mile and 1 1/16 miles in her two Grade 1 wins.

“Our first big goal is going to be the Oaks, so we’re concentrating on that. Do I want her peaking on March 2nd? No, I don’t. But, she’s doing well,” Servis said. “She doesn’t have to be in front. She can press, but she’s sharp so I expect her to be close. And, I expect her to run well.”

Trainer Ian Wilkes is hoping for an honest pace for Six Column Stables and Randall Bloch’s typically late-running Champagne Anyone (6-1), who closed to be third by three-quarters of a length, just a neck out of second, in the Forward Gal (G3) Feb. 2.

“I’m happy with her. I’m very pleased with her training,” Wilkes said. “I think she’s moved forward since that race, and she needs to, because the water just gets deeper.”

Champagne Anyone, a bay daughter of 2007 Kentucky Derby winner Street Sense whose grandsire is Hall of Famer Ghostzapper, will be testing graded company for the third straight race, having run fourth in the 1 1/16-mile Golden Rod (G2) Nov. 24 to close her 2-year-old season. She was never farther than 5 ½ lengths from leaders Feedback and Bye Bye J in the Forward Gal; neither speedy rival returns in the Davona Dale.

“The further the better for her. I used the seven-eighths as a kick off to the year just to stay in rhythm and build toward the Oaks,” Wilkes said. “I thought it was a very encouraging race, to close on the Gulfstream track like she did. She put herself a little bit handier in the race, which was a new dimension for her. She wasn’t out the back door, and I thought she ran a very game race. I couldn’t have been any happier with her effort.”

Chris Landeros, up for all five of her starts, rides back from Post 5 at 116 pounds.

Arindel’s Cookie Dough, who swept the final two legs of the Florida Sire Stakes for 2-year-old fillies last fall,  is entered to make her return to the races in the Davona Dale. Trained by Stanley Gold, the Brethren filly won the $200,000 Susan’s Girl and $400,000 My Dear Girl by 14 combined lengths, the latter coming Sept. 29. She missed a start in the Breeders’ Cup Juvenile Fillies when she got sick after shipping to Kentucky. Regular rider Jeffrey Sanchez has the call from Post 2 at 120 pounds.