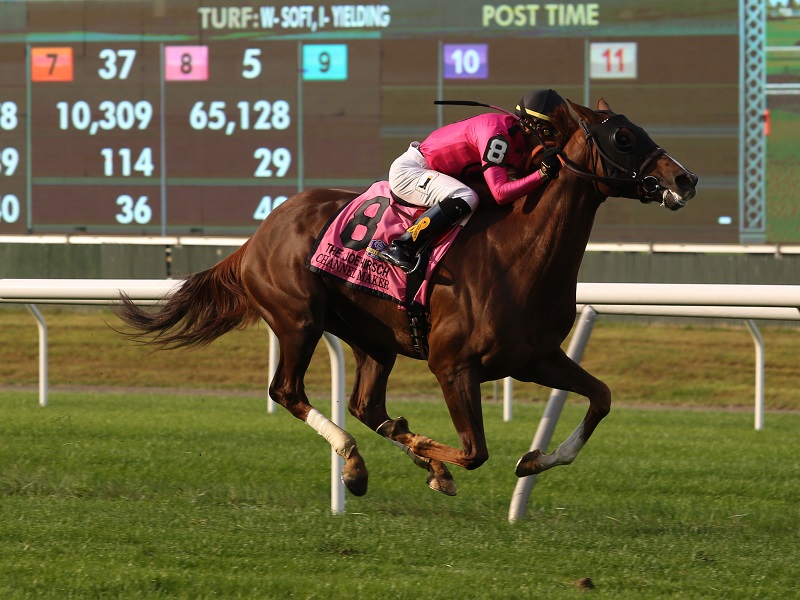 The 24th running of the 1 3/8-mile Mac Diarmida for older turf horses is among nine graded-stakes worth $1.65 million in purses on a blockbuster 14-race program featuring the $400,000 Xpressbet.com Fountain of Youth (G2), the next step on the road to the $1 million Xpressbet.com Florida Derby (G1) March 30, and 2018 champion juvenile filly Jaywalk’s seasonal debut in the $200,000 Davona Dale (G2).

Dating back to his final start in the fall of 2017, Channel Maker has faced Grade 1 company in nine of 10 races, the lone exception a dead-head victory with turf male Eclipse Award finalist Glorious Empire in the Bowling Green (G2) last summer at Saratoga. Two of those races have come at Gulfstream, where he was fifth in both the 2018 Gulfstream Park Turf and inaugural $7 million Pegasus World Cup Turf Invitational Jan. 26, the richest grass race in North America.

In the 1 3/16-mile Pegasus, contested over a yielding course, Channel Maker raced near the back of the 10-horse field after having to check in tight quarters early and made a bid late on the outside but was beaten 6 ½ lengths by Bricks and Mortar. In his previous start, he pressed the pace for a half-mile before fading to 11th in the Breeders’ Cup Turf (G1), also run over soft going.

Channel Maker, by turf champion English Channel, won the 1 ½-mile Joe Hirsch Turf Classic (G1) last fall prior to his run in the Breeders’ Cup, which like the Bowling Green came on less than firm turf. Overall, he has finished in the top three in 11 of 22 starts with four wins and $1.53 million in purse earnings.

“He’s doing well. He got a little far back last time. Tactically maybe he wasn’t in the best spot,” Hall of Fame trainer Bill Mott said. “I can’t make huge excuses for him. He had the entire stretch to make up ground and he made up some ground, but not enough. We’re going to a little bit longer distance now and hopefully that‘ll suit him and he’ll be placed up into the race a little bit earlier. The last one was nine and a half furlongs so we’re stretching out a little bit this time which suit him a little better.”

Joel Rosario, aboard in the Bowling Green and a runner-up finish to Glorious Empire in the Sword Dancer (G1), gets the return call from outside Post 11 at co-topweight of 123 pounds.

Stephen Casey and Cory Hoffman’s Melmich, a multiple graded-stakes winner over the synthetic in his native Canada, will make his third career turf start and second straight over the Gulfstream surface in the Mac Diarmida.

In his most recent effort, the 8-year-old Wilko gelding trailed by as many as 15 lengths before uncorking a late rally that saw him finish third, beaten 1 ½ lengths as the favorite, in the 1 1/16-mile Chrysaor Stakes Jan. 25. An ex-claimer, Melmich has 17 career wins, eight in stakes, five of them Grade 3, with $1.03 million in purses earned and has finished in the top three in 36 of 43 lifetime starts.

“He’s obviously run almost exclusively on the synthetic. He had one start on the turf that was horrendous prior to us getting him and prior to him getting real good. The turf has always been kind of a question and we wanted to find kind of an easy spot for him where he could try the turf and see if he did like it or not, and I thought he ran really well. At the top of the stretch he was dead last and came closing with a big rush to run third,” trainer Kevin Attard said. “Obviously he’s taking a big step up in company compared to his last race but he’s a multiple graded-stakes winner at home and he’s a nice horse. The distance isn’t going to be an issue.”

Hall of Famer Javier Castellano is named to ride from Post 3 at 118 pounds.

Sean Shay and Michael Ryan’s Grade 2 winner Hunter O’Riley is set to make his second start off a nine-month break between races in the Mac Diarmida. Bumped early and forced to race wide, the 6-year-old gelding closed to be fourth, beaten 4 ¼ lengths, in the 1 ½-mile W.L. McKnight (G3) Jan. 26 at Gulfstream.

“He came out of it good. It was a good effort first race back for him,” trainer Jimmy Toner said. “The turf was soft and he got floated out a little bit so, all in all, I was very happy with his effort. He came out of it good and responded good, so we might as well take a shot when he’s doing well.”

Hunter O’Riley will be making his 20th career start in the Mac Diarmida, his fourth try over the Gulfstream turf. He was third in the two-mile H. Allen Jerkens in 2016 and sixth by two lengths in the 2017 McKnight. Later that year, he would win the Bowling Green (G2) by a neck and run fourth, 1 ¼ lengths behind Sadler’s Joy, in the Sword Dancer. The 2019 McKnight was Hunter O’Riley’s first race since he was ninth in the 1 ½-mile Elkhorn (G2) last spring at Keeneland.

“The last time he ran at Keeneland, he came up with an issue after that race and it necessitated giving him some time off – probably [more] time [than] we normally would, but we figured we missed the whole season with him, basically, so let’s just give him the extra time and bring him back this year,” Toner said. “He’s been very consistent. He’s a tough campaigner and he tries hard every time. He gives you what he’s got. When he’s there and he’s 100 percent, he’s very good.”

Tyler Gaffalione is named to ride Hunter O’Riley from Post 4 at 119 pounds.

Michael Hui’s Zulu Alpha has won two of three starts since being claimed for $80,000 last fall by trainer Mike Maker, both victories coming in 1 ½-mile graded-stakes – the Sycamore (G3) at Keeneland and the McKnight in his 6-year-old debut. Maker also entered Kulin Rock, second by a nose in a 1 1/16-mile starter allowance Jan. 21 at Gulfstream.

The Mac Diarmida is named for the 1978 champion grass horse trained by late Hall of Famer Scotty Schulhofer who raced 16 times from 1977-78 with 12 wins, seven in graded-stakes, capping his career with victories in the Canadian International Championship (G1) and Washington D.C. International (G1).