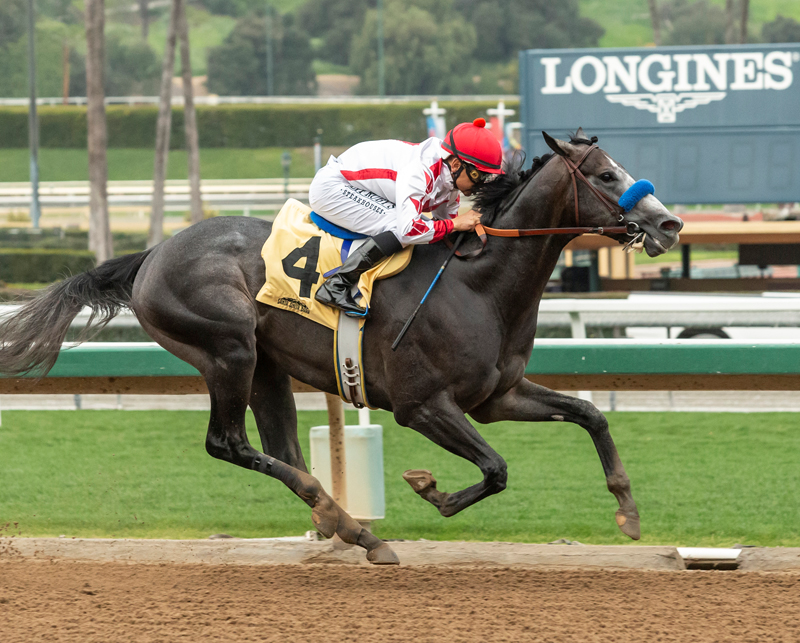 “He’s back on the Derby trail,” said Baffert, himself a winner of five Kentucky Derbies, including last year’s, which he won with eventual Triple Crown champ Justify, who made his first-ever start on Feb. 18, 2018 at Santa Anita.  “That was quite a performance off a layoff.  We just want to see how he comes out of this…When he worked in 10 and three (six furlongs in 1:10 3/5s on Feb. 17) out of the gate the other day, that’ssick, for a horse to do that on this track.”

Breaking sharply from his number four post position, Roadster saved a bit of ground by tucking in just behind 3-5 favorite Nolo Contesto and longshot Diamond Blitz heading into the Club House turn.  Straightening up the backside, Roadster drew alongside Nolo Contesto while assuming second position and was subsequently lapped on Diamond Blitz around the far turn, gaining a narrow advantage leaving the quarter pole.

With Smith shaking the reins approaching the furlong pole, Roadster, who was making his third start and his first try at two turns, separated himself with an impressive turn of foot, leaving no doubt as to the outcome as Nolo Contesto was all-out to gain the place.

“I’m just so happy with the way he ran,” said Smith, who has ridden him in all three of his starts.  “His mechanics, his (breathing), everything was smooth.  Last time, he was struggling, so they did a little  minor surgery (to address his breathing).  Today, he was loving it.”

When asked how Roadster seemed to handle the surface, Smith responded, “The track is great,   it’s got a lot of cushion.  They’re just floating over it.  This colt loved it.”

Owned by Speedway Stable, LLC, Roadster, who was a $525,000 Keeneland September Yearling Sale purchase, now has two wins from three starts and with the winner’s share of $34,200, increased his earnings to $106,200.

Bet to 3-5 favoritism on the strength of a one mile maiden win here Jan. 4, Nolo Contesto, who is trained by John Sadler and was ridden by Joel Rosario, was under a hard drive to keep up mid-way around the far turn, but kept to his task while finishing a half length in front of Manhattan Up and paid $2.10 and $2.10.

Ridden by Tiago Pereira, Manhattan Up finished 7 ½ lengths clear of early leader Diamond Blitz.  Off at 19-1, Manhattan Up paid $2.10 to show.