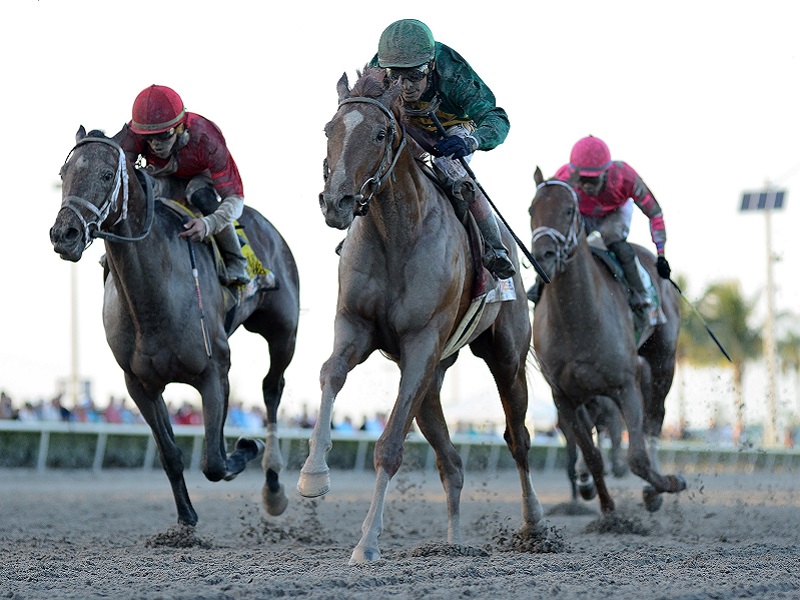 HALLANDALE BEACH, FL – W.S. Farish’s Code of Honor rebounded from a disappointing effort in his 2019 debut to capture Saturday’s $400,000 Xpressbet.com Fountain of Youth (G2) at Gulfstream Park and stamp himself as a leading prospect for the $1 million Xpressbet.com Florida Derby (G1) and the 2019 Triple Crown.

Code of Honor was saddled by Hall of Fame trainer Shug McGaughey, who captured the 2013 Fountain of Youth, Florida Derby and Kentucky Derby (G1) with Orb.

Code of Honor was sent to post at 9-1 for the 1 1/16-mile Fountain of Youth, which headlined a 14-race program highlighted by nine graded stakes, and produced a winning performance expected of him in the Jan. 5 Mucho Macho Man at Gulfstream, in which he finished fourth as the 4-5 favorite.

The son of Noble Mission’s winning stretch kick was benefited by a hotly contested pace set by Hidden Scroll, the 6-5 favorite ridden by Joel Rosario, and pressed on his inside by longshot Gladiator King.

Code of Honor, who broke from the No. 1 post position in the 11-horse field, saved ground around the first turn and along the backstretch in fifth under John Velazquez as the pacesetters set dazzling fractions of 22.80 and 45.69 seconds for the first half mile. Hidden Scroll, who was only making his second career start after breaking his maiden by 14 lengths at Gulfstream by 14 handy lengths Jan. 26, shook off Gladiator King to open a lead on the far turn with Global Campaign in closes pursuit. Meanwhile, Velazquez left the rail with Code of Honor just long enough to go around Gladiator King on the far turn before ducking back to the rail to advance toward the leader. After putting away Global Campaign and Vekoma while cutting the corner into the homestretch, Code of Honor loomed as a serious threat while swinging to the outside in pursuit of Hidden Scroll.

Hidden Scroll shortened stride in the stretch after his early efforts as Code of Honor swept by on his way to victory. Bourbon War, who had won two of three starts, closed well to finish second, three-quarters of a length away and two lengths ahead of Vekoma.

“There was so much speed in the race I was expecting a quick pace in front of us. We broke well, got position into the first turn and we held that position there. Once I was on the backstretch I was very comfortable with the way he was doing things. By the time three-eighths pole I was a little uncomfortable – one horse was kind of backing up [Gladiator King] and the other one [Vekoma] was kind of holding me there. I had to make kind of a premature move around the quarter pole and I got there a little too soon to tell you the truth, but once he got in front he opened up a little bit,” Velazquez said.

Code of Honor, who ran 1 1/16 miles in 1:43.85, was trained more aggressively for the Fountain of Youth than he was prior to the Mucho Macho Man.

“After the Mucho Macho Man, I said listen, we’re going to train him. If he takes it he takes it, and he took it. He was doing good with what we were putting into him, so we kept doing it and we felt like he was going to come down here and run well,” McGaughey said. “I thought we drew a good post. We saved some ground going around the first turn and just be patient. We got the set up.”

Prior to the Mucho Macho Man, Code of Honor had broken his maiden at first asking at Saratoga in August before finishing a troubled second in the Champagne (G1) at Belmont Oct. 6. He was entered in the Breeders’ Cup Juvenile (G1) at Churchill Downs Nov. 2 but was scratched on race day due to spiking a fever.”

McGaughey said he would weigh his options for Code of Honor’s next start.

“I would prefer to stay here [for the Florida Derby], but I’m going to see,” McGaughey said. “A couple of them [Grade 2 Wood Memorial at Aqueduct and Blue Grass at Keeneland April 6] and the Blue Grass are a little farther down the line, so we’ll see how he comes out of it. We’ll figure it out.”

Bourbon Road also benefited from the hot early pace but did run into traffic heading into the stretch under Irad Ortiz Jr.

“He ran very well. Irad said, ‘I don’t like that first wire.’ He said he kind of had to wait a little at the quarter pole for some room, but he said he didn’t want to ask him and have to check. So he said he waited and waited and he was just humming down the stretch, trainer Mark Hennig said. “He’s going to appreciate more ground, that’s for sure.”

Hidden Scroll finished fourth, a neck behind Vekoma, in his stakes debut.

“He ran good. It makes you wonder -- should we have chosen an easier spot? But I guess we felt we wanted to find some things about him today, and we found out we weren’t ready for this,” trainer Bill Mott said. “I would have loved to have gone in 46-and-three [seconds]band maybe we would have had a little more to finish up with. He got wrapped up in basically kind of a speed duel he shouldn’t have been. Anyway, that’s history. We’ll turn the page.”