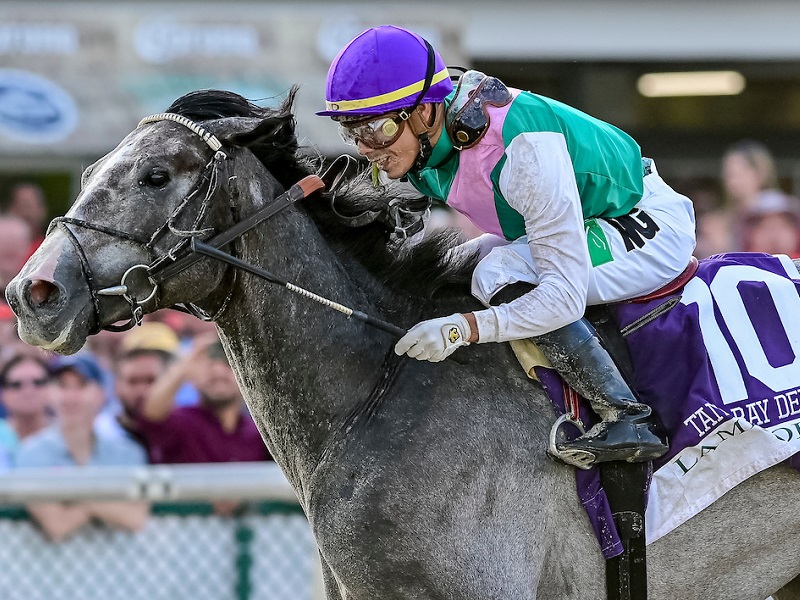 Hall of Fame trainer Bill Mott clearly is not a man in a hurry.

A mere 22 years after his first victory in Tampa Bay Downs’ biggest race, Mott grabbed another Grade II Lambholm South Tampa Bay Derby triumph. And he did it with Tacitus, a colt with only two starts as a 2-year-old, and one who had not raced since his maiden victory on Nov. 10 at Aqueduct.

“He’s been a big, growthy colt all along, and when we were breezing him in the middle of the summer he was just a big, laid-back horse. We didn’t know what we had until we got into the fall,” Mott said after Tacitus and jockey Jose Ortiz got through late on the rail and powered to a length-and-a-quarter victory from Outshine.

The 7-5 favorite, Win Win Win, finished third in the 11-horse field, with pace-setter Zenden holding on for fourth.

A crowd of 10,275 thrilled to the exciting action on a sunny, balmy afternoon. Total wagering handle on the 12-race card was $13,956,020 and change, the second-highest amount in Tampa Bay Downs history.

Two other graded stakes were contested, with 5-year-old mare Rymska and Irad Ortiz, Jr. (Jose’s brother) rallying for a two-length victory from Hawksmoor in the Grade II, $225,000 Hillsborough Stakes on the turf and 3-year-old filly Concrete Rose and Julien Leparoux holding off Blowout by a half-length in the Grade III, $200,000 Florida Oaks, also on the turf.

In the day’s other stakes, last year’s Grade III Sam F. Davis winner and Lambholm South Tampa Bay Derby runner-up, Flameaway, outgamed Killybegs Captain through the stretch to post a half-length victory in the $100,000 Challenger Stakes under Jose Ortiz, and Digital Age and Irad Ortiz, Jr., posted a head victory from Forever Mo in the $75,000 Columbia Stakes for 3-year-olds on the turf.

In the Lambholm South Tampa Bay Derby, Jose Ortiz managed to find the inside early from the No. 10 post position and raced in mid-pack up the backstretch, while Zenden led Sam F. Davis winner Well Defined and the others through taxing fractions.

“He (Tacitus) broke very well and gave me a lot of choices by the first turn,” Ortiz said. “When the 9 horse (Dunph) went out, I decided to go in and follow the 1 (Admire) because I thought he had a good chance to win.

“I took a lot (of dirt), but the dirt doesn’t stick as much here as some other tracks, so I think it was good for my horse. He’s a little green still, but we got a rail trip and it opened up for us.”

A few anxious moments followed, with Outshine and Joel Rosario still looming as a threat, but Ortiz re-engaged the winner.

“He’s a big horse and when he made the lead, he didn’t keep going; he kind of waited a little bit,” the jockey said. “He does everything so easy and I don’t know if he’s given me 100 percent yet (in his three races) – I don’t think so.”

Ortiz was also capturing his second Lambholm South Tampa Bay Derby, having won the 2017 edition with Tapwrit. Mott had won the race in 1997 with Zede. “I’ve been waiting a long time,” Mott said with a big grin.

“We’ve always liked this horse and thought he could be a horse that would be on the (Kentucky) Derby trail,” Mott said. “I liked him a lot better today at the 3/8-mile pole than I did at the 5/8 pole, because it looked like when he was trying to get between horses, I couldn’t tell if he was maybe fighting with the racetrack.

“He was climbing a little bit but once he got through between those horses, he really got some confidence and got some momentum. Jose said he actually finished with something left. He got to the lead and maybe started to dog it a little bit, but I thought it was a very good race and a very good education for him.”

Michael Trombetta, the trainer of 7-5 favorite Win Win Win, was not overly disappointed after talking to his jockey, Irad Ortiz, Jr.

“I want to go back and watch the head-on of the break; Irad said it was a little bit of a tangle out of the gate,” Trombetta said. “I think he was satisfied with the way that he ran. I just think if he could have gotten a little better position early, we might have had more of a favorable outcome. He finished with good energy and just couldn’t quite get it done.”