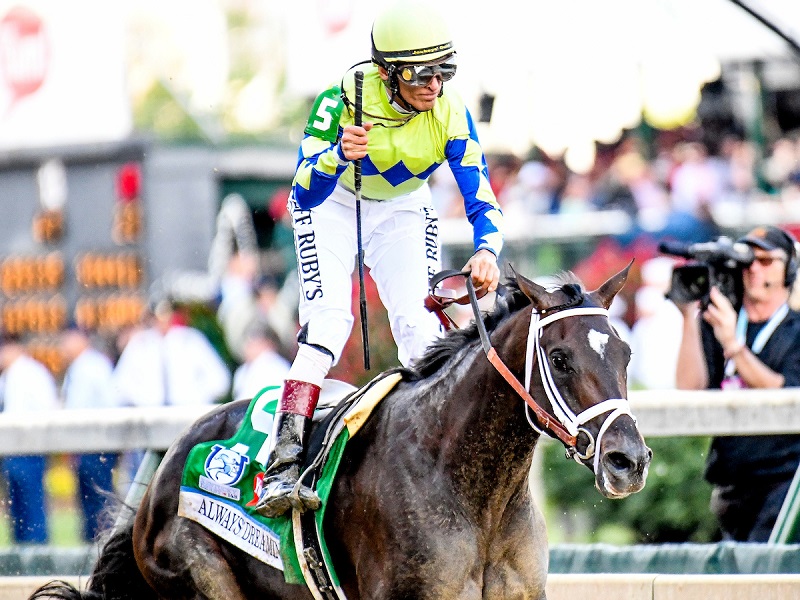 SARATOGA SPRINGS, N.Y. - Saturday's Grade 2, $600,000 Jim Dandy at 1 1/8 miles, will feature Kentucky Derby winner Always Dreaming and Preakness winner Cloud Computing in a matchup not drawn between winners of the first two legs of the Triple Crown series at Saratoga Race Course since 1991, when Derby winner Strike the Gold faced the Preakness winner Hansel in the Travers.

Neither made it to the winners' circle that day, and in fact, only eight Derby winners have returned to Saratoga since.

As Race 10 and one of four stakes races on the day's card, the Jim Dandy will anchor Saturday's "Saratoga Live" program, which will air nationally on FS2 from 5-6:30 p.m.

Always Dreaming, off a disappointing eighth-place finish in the Preakness, fired an easy five-furlong breeze in 1:01.71 over the Oklahoma training track with jockey John Velazquez on Saturday morning. The work put the finishing touch on training up to the race, planned under the watchful eye of trainer Todd Pletcher, in search of his seventh Jim Dandy victory.

"Anytime you have the Kentucky Derby winner running you don't want to get beat," Pletcher said. "But it's something we thought a lot about between the Preakness and now and we wanted to get here not just with a fresh horse, but a horse hopefully fit enough to run a mile and an eighth.

"It's always a delicate balance when you're trying to freshen a horse up, and have him ready for a race like the Jim Dandy," he added. "You know you have to be fit and prepared for it, but you also want to hopefully have something to build on, and something left in the tank for the Travers. I think we've been able to accomplish that in the time off after the Preakness."

Third in his debut at Belmont Park last summer, Always Dreaming shipped up to Saratoga soon afterward, and was sent off as the betting favorite against eight other maidens. He would fall short by a neck that day and settle for second. Four days later, the son of Bodemeister was transferred to Pletcher's barn.

Stretching out to a two-turn route in late January, he romped home to break his maiden by 11 ½ lengths at Tampa Bay Downs. From there, a four-length score at Gulfstream in March led him onto the Derby trail. A five-length victory in the Grade 1 Florida Derby set him up as the Kentucky Derby favorite, to which he responded with the best race of his career to capture the "Run for the Roses."

A disappointing eighth-place finish in the Preakness gave the $350,000 yearling purchase a breather until the summer.

"He settled in well," said Pletcher. "He ran well here last year as a 2-year-old. The one thing we've seen with him is that he's able to take his races over multiple surfaces. He's run well at Tampa and Gulfstream, on a really slow surface one day, a really fast surface one day, a sloppy track at Churchill and ran as a 2-year-old at Belmont and Saratoga, so when he's in good form he'll run over any track."

The 143rd Kentucky Derby winner will run from the rail with Hall of Fame rider John Velazquez, a four-time winner of the Jim Dandy.

Klaravich Stables and William Lawrence's Cloud Computing also finalized his worktab on Saturday morning with a four-furlong breeze in 49.09 seconds over the main track for trainer Chad Brown. The Jim Dandy will be just his fifth career start after his rate-and-pounce trip earned him a head victory over Classic Empire in the Preakness.

It was the second time the colt by Maclean's Music visited the winners' circle since his maiden win at Aqueduct in February. A second-place finish to J Boy's Echo in the Grade 3 Gotham preceded a third-place finish in the Grade 2 Wood Memorial before his connections opted to skip the Derby and face the Preakness fresh.

"He looked really good today," Brown said. "I thought the horse breezed great, and coming off this work, he remains on target."

Cloud Computing will run from post 2 and will be ridden by Javier Castellano.

Mossarosa's Giuseppe the Great will make his sixth career start as he gets another try at longer distances after tiring late in the Grade 3 Dwyer. The colt by Lookin At Lucky ran second at long odds in the Grade 2 Woody Stephens on Belmont Stakes Day, and although facing strong competition, he has a confident backer in his corner - Hall of Fame trainer Nick Zito.

"He's nice, a very consistent horse," Zito said. "I'm very happy with everything he's been doing right now. His last race was very complimentary to him because he had every right to chuck it, but he didn't chuck it. He fought to the end. It was a funny track that day. It rained, stopped raining, and so when it dried the track was kind of on the heavy side. That Dwyer was better than people think. The interesting thing about him is that he never runs a bad race. He's consistent. That's what I love about him. He's a nice horse to have."

The Classic matchup between Always Dreaming and Cloud Computing doesn't faze Zito. His colt may be an underdog, but the Brooklyn-born trainer who brought Strike the Gold to the paddock that day in 1991 just needs to show up.

"You've got a Derby winner, and a Preakness winner which means one thing, we're hanging out in good company. That's all there is to it," he said. "You know, this track has such a history of things happening so, if we have a good week, God willing, we'll be in great shape. It's just enough to compete. Then we'll find out. If he can't go the distance of ground, we'll go back. That's all. He's good enough to find out. He's a fighter. Whatever he's going to do he's going to try hard."

Giuseppe The Great will break from post 3 and gets Luis Saez aboard for the first time.

Winstar Farm and Head of Plains Partnership's Good Samaritan brings his late-closing style to the fray, and will make his first start on dirt after six career trips on turf. His last, a fourth-place finish in the paceless Grade 1 Belmont Derby at Belmont Park was the first race where the Harlan's Holiday colt failed to hit the board for Hall of Fame trainer Bill Mott.

Trying Good Samaritan on dirt has been something Mott and Elliot Walden, President and CEO of Winstar have been toying with for a while. The Harlan's Holiday colt was cross-entered in both the Breeders' Cup Juvenile Turf and the Juvenile.

"He's been wanting to try him on the dirt for a long time," Mott said. "Even since he was a 2-year-old, he did even consider it in the Breeders' Cup. He's been anxious to find out. I think we have enough reasons to try it. Pedigree, and the fact that if you don't try it you never know. We talked about it earlier in the year. We had to lay him up so we missed the whole Triple Crown because of the timing of everything so I kind of put everything off until the Belmont Derby. He's doing well."

Two consecutive runner-up efforts in the Grade 2 American Turf and Grade 3 Pennine Ridge, respectively, came as a sophomore after his third-place finish in the Grade 1 Breeders' Cup Juvenile Turf to close out his 2-year-old season, where he won the Grade 2 Summer Stakes at Woodbine after breaking his maiden first time out at Saratoga. A quicker pace unlike what hindered his performance in the Belmont Derby could work in his favor, Mott noted.

Good Samaritan has the outside post 5 with regular rider Joel Rosario in the irons.

Reddam Racing's quick-footed Pavel made the cross-country trip from Santa Anita for trainer Doug O'Neill arriving Wednesday morning with the hope of making his presence known. The Creative Cause colt faces a few new challenges this afternoon by facing much tougher than his one start, and by stretching out from his speedy debut at 6 ½ furlongs, where he cleared eight others to win by 4 ½ lengths.

"We are definitely going into deep waters," O'Neill said. "But that obviously shows what we think about him."

Pavel will exit post 4 and gets Mario Gutierrez in the irons.