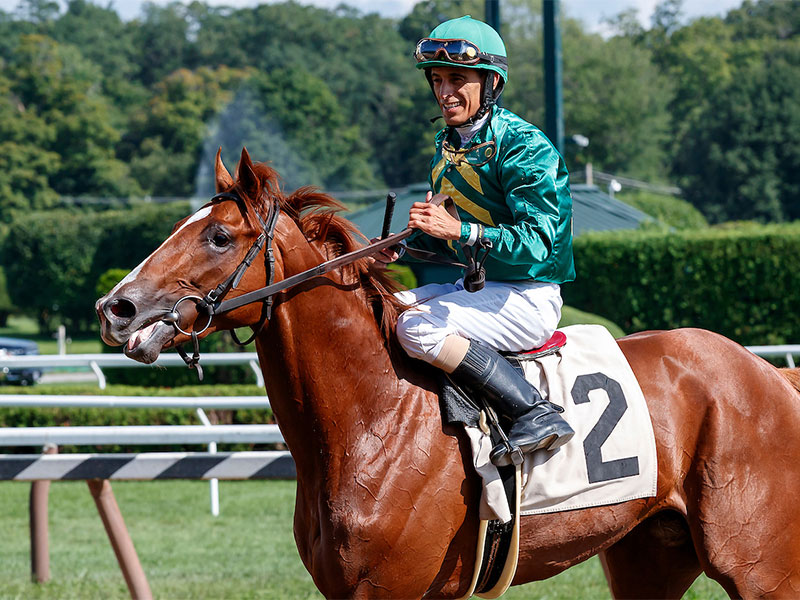 The Shug McGaughey-trained colt made a strong run on the final turn and through the stretch to register a three-quarters of a length triumph in the 1 1/16-mile Fountain of Youth, a key prep for the 1 1/8 mile stakes for 3-year-olds that has established itself as the premier Triple Crown prep since its inaugural running in 1952.

Code of Honor will seek to follow in the hoofprints of Orb, the McGaughey-trained winner of the 2013 Fountain of Youth and Florida Derby who went on to capture the Kentucky Derby (G1).

Bourbon Lanes Stable and Lake Star Stable’s Bourbon War, R.A. Hill Stable and Gatsas Stables’ Vekoma and Juddmonte Farms, Inc.’s Hidden Scroll, who finished second, third and fourth, respectively, behind Code of Honor in the Fountain of Youth are also nominated to and expected to return in the Florida Derby.

Mark Hennig-trained Bourbon War won two of three starts prior to the Fountain of Youth, including a fast-closing 2 ¼-length optional claiming allowance at 1 1/16-miles at Gulfstream Jan. 18; George Weaver-trained Vekoma captured the Nashua (G3) at Aqueduct in his 2018 finale before racing evenly to finish third in his 2019 debut at Gulfstream; Hidden Scroll was sent to post as the 6-5 favorite for the Fountain of Youth after scoring by 14 lengths in his career debut Jan. 26 at Gulfstream Park. In addition to Hidden Scroll, trainer Bill Mott nominated Tacitus and Country House, who are not scheduled to take on their stablemate.

Harvey Wallbanger, who registered a 29-1 upset victory in the $350,000 Holy Bull (G2) at Gulfstream Feb. 2, is also among the nominees scheduled to start in the Florida Derby. The Ken McPeek-trained colt was coming off a maiden victory around two turns at Churchill Downs in his previous start for owners Harold Lerner, LLC, AWC Stables, Nehoc Stables, Scott Akman and Paul Braverman.

Gary and Mary West’s Maximum Security is scheduled to put his undefeated record on the line in the Florida Derby. The Jason Servis-trained son of New Year’s Day debuted for a $16,000 claiming tag in a 9 ¾ -length romp at Gulfstream Dec. 20 and went on to win a pair of starter optional claiming races, including an 18 ¼-length score that was achieved in a swift 1:21.72 for seven furlongs Feb. 20. The Servis-trained Final Jeopardy, a recent optional claiming allowance winner at Gulfstream for the Wests, is also nominated.

Hoffa’s Union, who was purchased by Gary Barber, Wachtel Stable, Christopher Dunn, Rose Petal Stable and Foard Wilgis after winning his recent debut at Laurel Park, is expected to make the leap from maiden to Grade 1 stakes competition in the Florida Derby. The Mark Casse-trained son of Union Rags captured a 1 1/16-mile maiden special weight race by 15 ½ lengths Feb. 28.

Trainer Dale Romans is represented by three horses on the Florida Derby nominations list – Calumet Farm’s Everfast and Albaugh Family Stables LLC’s Admire and Come On Gerry. Everfast finished second behind Harvey Wallbanger in the Holy Bull before finishing off the board in the Fountain of Youth. Admire and Come On Gerry are coming off out-of-the-money finishes in the Tampa Bay Derby (G2) and Holy Bull, respectively.