A. P. Indian seeks to repeat in G1 Vanderbilt 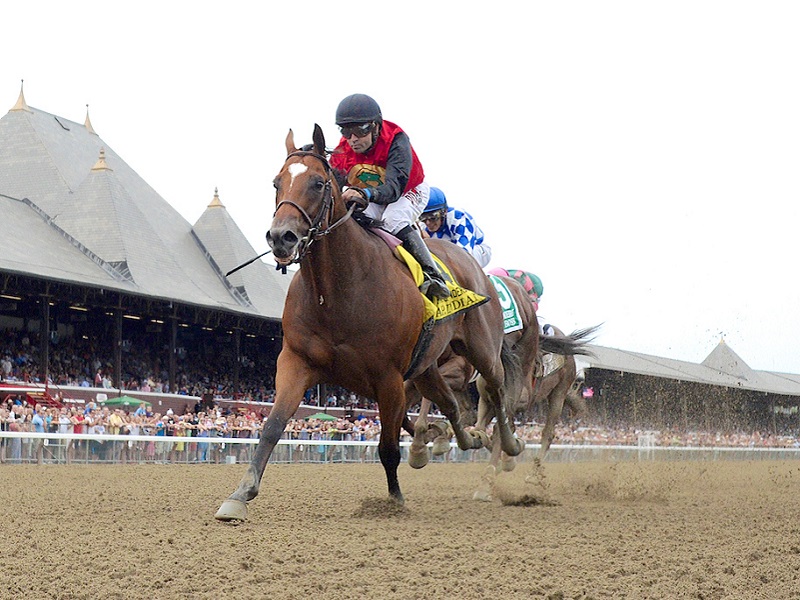 A. P. Indian loomed over the Saratoga sprint division last summer, posting back-to-back Grade 1 victories at the Spa. The Indian Charlie gelding already owned three straight stakes wins when he notched a 1 ¼-length score in the Vanderbilt and came back four weeks later to dominate the Forego by 2 ½ lengths on Travers Day.

A win in the Grade 2 Phoenix in the fall at Keeneland extended his win streak to six before he was elevated to third, finishing 4 ½ lengths behind Drefong in the Breeders' Cup Sprint.

This spring, Arnaud Delacour's 7-year-old trainee turned in a pair of runner-up efforts against Grade 3 company, most recently finishing a half-length behind Whitmore in the Maryland Sprint on May 20 at Pimlico Race Course.

Following the Maryland Sprint, A. P. Indian was targeting the Grade 3 Belmont Sprint on July 8, a race he won by a head last year, before a minor physical issue set back his training schedule, said Delacour.

"He came back with a little of pressure in his ankle after a breeze leading up to the Belmont Sprint Championship so we decided to skip the race and freshen him up a little bit," he said. "He's been good ever since."

A. P. Indian arrived at Saratoga last week from Delacour's training base at Fair Hill in Maryland and recorded his final breeze for the Vanderbilt last Saturday over the Oklahoma training track, covering five furlongs in 1:02.44.

"The horse is doing well. He breezed once on the Oklahoma, just a maintenance breeze, a few days after shipping," said Delacour. "He's in good spirits and we're looking forward to running him. The horse is very professional; he knows what's going on."

A. P. Indian will break from post 4 under regular jockey Joe Bravo, who boasts a 5-2-1 record in eight starts aboard the gelding.

Marylou Whitney Stable's homebred Bird Song will shorten up to the Vanderbilt's six-furlong distance for the first time since winning an allowance race in July 2016 at the Spa.

Trained by Ian Wilkes, the gray colt has tested out longer two-turn distances this spring, including the Grade 2 Alysheba at 1 1/16 miles at Churchill Downs, where he posted a 1 ½-length, front-running victory on May 5.

"This may be a little too short for him but I'll try it," said Wilkes. "He's won going two [turns] but I think his strength is going to be around one turn."

Fresh off a 47.33-second bullet work last weekend, the 4-year-old son of Unbridled's Song will leave from post 5 with Julien Leparoux aboard.

Jacks or Better Farm's Awesome Banner will try to get back to the winners' circle for the first time since October 2016. Trained by Kenneth Decker, the 4-year-old chestnut colt finished a dull ninth in the seven-furlong Grade 1 Carter Handicap this spring before finishing a close third in the Maryland Sprint.

Last time out, Awesome Banner set a solid pace in his second straight race at six furlongs in the Grade 3 Smile Sprint, where he was reeled in late to finish second to multiple Grade 3 winner Imperial Hint.

"He's ran some pretty nice races going seven [furlongs], but six fits him," said Decker. "He puts himself in the race early and he's pretty tough, so it seems to fit him pretty well."

"He's a quality colt," he added. "He's run against some of the best in the country the last two times out and made a real good account of himself. We feel good going into this one and feel like we'll be pretty competitive."

Jose Lezcano picks up the mount aboard Awesome Banner, a Florida-bred son of Awesome of Course. The pair will break from post 2.

Decathalon winner El Deal will make a big jump up in class for owners Michelle and Albert Crawford and trainer Jorge Navarro. A 5-year-old son of Munnings, El Deal has posted triple-digit Beyer Speed Figures in back-to-back wins since transferring to the Navarro barn this spring, including a 7 ¾-length score in a 4 ½-furlong handicap at Charles Town Race Track on April 22.

El Deal will depart from post 3 with Javier Castellano in the irons.

Green Gratto will look to rebound from a pair of fifth-place finishes during the Belmont Park spring/summer meet for trainer and co-owner Gaston Grant. The speedy horse by Here's Zealous started off his 7-year-old campaign with a front-running win in the Grade 3 Toboggan. He scored his first Grade 1 victory two starts later, leading every step of the way to hold off Unified to win the Carter by a neck on April 8.

Kendrick Carmouche has the mount aboard Green Gratto, who drew post 7.

Rounding out the field for the Vanderbilt are Ready for Rye, making his second start of the year following an optional-claiming win on June 18 for Chalk Racing and trainer Tom Albertrani; Constantine Peter Beler's homebred Spartiatis, a two-length winner of the Grade 3 Tom Fool Handicap in March at Aqueduct Racetrack for the barn of Leon Blusiewicz; and Katherine Ball's Limousine Liberal, recent winner of the Kelly's Landing at Churchill Downs for trainer Ben Colebrook.