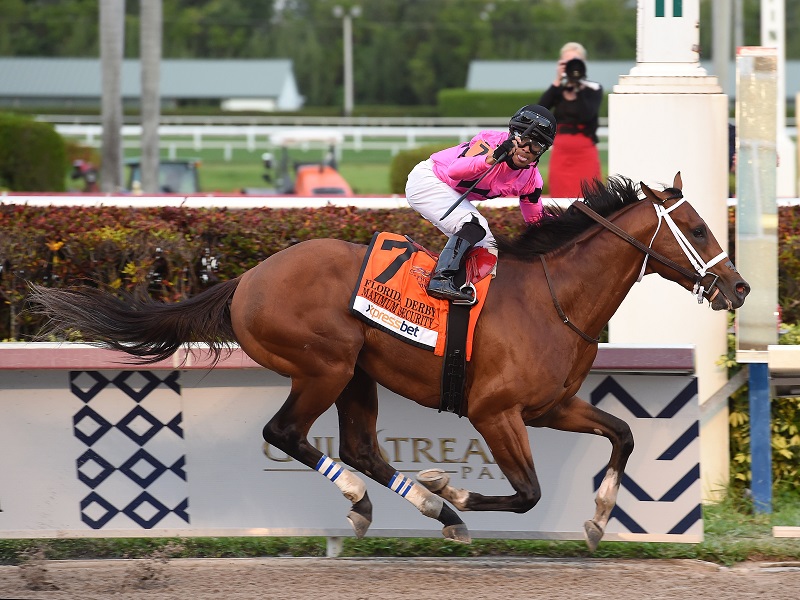 HALLANDALE BEACH, FL – Gary and Mary West’s Maximum Security locked up Saturday’s $1 million Xpressbet.com Florida Derby (G1) at Gulfstream Park, punching his ticket for a start in this year’s Kentucky Derby (G1) – something that seemed highly unlikely when he debuted at Gulfstream for a $16,000 claiming price Dec. 20.

Trained by Jason Servis, undefeated Maximum Security ($11.60) was in full control while setting the pace throughout the 1 1/8-mile Triple Crown prep, setting comfortable fractions of 24.42 and 48.98 seconds for the first half-mile and rolling on to a 3 ½-length victory under Luis Saez.

“It was beautiful. He broke so perfect and I just took it. He was traveling beautiful, and when he came to the half-mile pole and you feel the pressure I knew I had a lot of horse and in the stretch he just took off,” Saez said. “My plan was if [Hidden Scroll] or somebody else took the lead I’m going to sit because I don’t want to make the race for somebody else. He took it so easy, so I just went with it.”

The son of New Year’s Day ran 1 1/8 miles in 1:48.86 to win his fourth straight race without a defeat. Hidden Scroll, the 9-5 favorite ridden by Javier Castellano, was rank while tracking the pacesetter along the rail with Bodexpress, a 70-1 longshot ridden by Nik Juarez, to his outside as the field rounded the first turn and along the backstretch. Maximum Security continued to show the way around the turn into the homestretch before drawing away.

“The plan was not to go to the lead. I talked to Luis about it. I didn’t want to over-read the race. Luis agreed that there was going to be a couple speed horses that might not be as good as a Derby horse, so we were really thinking that we were going to be laying third,” Servis said. “At the end of the day I told Luis, ‘Look, he’s yours. He breaks, and you ride him however you want.’ I worked in the jock’s room for 20 years, and if I heard anything I heard jockeys say, ‘If this guy would have left me alone I could have won this race for him.’ I just wanted to stay out of Luis’ way. It was his decision 100 percent. They went slow early, and the rest is history.”

Maximum Security won the maiden claiming race by 9 ¾ lengths before winning a pair of starter optional claiming races by 6 ½ and 18 ¼ lengths, all at one-turn distances.

“He wasn’t beating anything, he really wasn’t, but he was three-for-three at the track and I had Luis Saez. I was like, ‘Hello, what’s the downside?’ Servis said on the decision to give Maximum Security his stakes and two-turn debut in the Florida Derby.

Bodexpress, a maiden with two seconds in four prior starts, held gamely to finish second in the Kentucky Derby qualifying race that awarded 100 points for first, 40 points for second, 20 points for third, and 10 points for fourth.

“It was a huge effort in Bodexpress. I really liked him going into the race and he impressed me the way he ran last time. He’s a young horse that can take dirt and when he finishes, he gives it all he has. Today he did the same exact thing, we just didn’t have enough pace – it was just me and Luis,” Juarez said of the runner-up.

Code of Honor, the 7-2 third choice ridden by John Velazquez, rated off the slow pace and rallied late to finish third, 3 ¼ lengths behind Bodexpress.

“I thought we were done in the turn and he kind of kept going. I think he tried to get him going early because he could see what was going on. It just didn't work out. I'm not overly disappointed with the way he ran,” said McGaughey of his Fountain of Youth (G2) winner who has earned sufficient points to make the Kentucky Derby field. “We'll see how he comes out of it and go from there.”

Hidden Scroll faded to finish fifth behind fourth-place finisher Bourbon War, the 5-2 second choice who raced off the pace.

“We'll start over, which is probably what most sensible trainers would have done in the very beginning anyway,” said Hidden Scroll’s Hall of Fame trainer Bill Mott. “We probably bit off more than we could chew and we'll kind of start over.”

“They’ve got some really good managers and we’ll see what they think they want to do. They’ve got that horse Game Winner, so I don’t know what we’ll decide,” Servis said. “I guess I have to cancel my fishing trip in May.”

The Florida Derby anchored the six-race sequence for the 20-cent Rainbow 6 Saturday, when a mandatory payout of the popular multi-race wager with a $2.6 million carryover generated $14.4 million in additional wagering. Maximum Security completed tickets with all six winners, which were each worth $1,934.68.