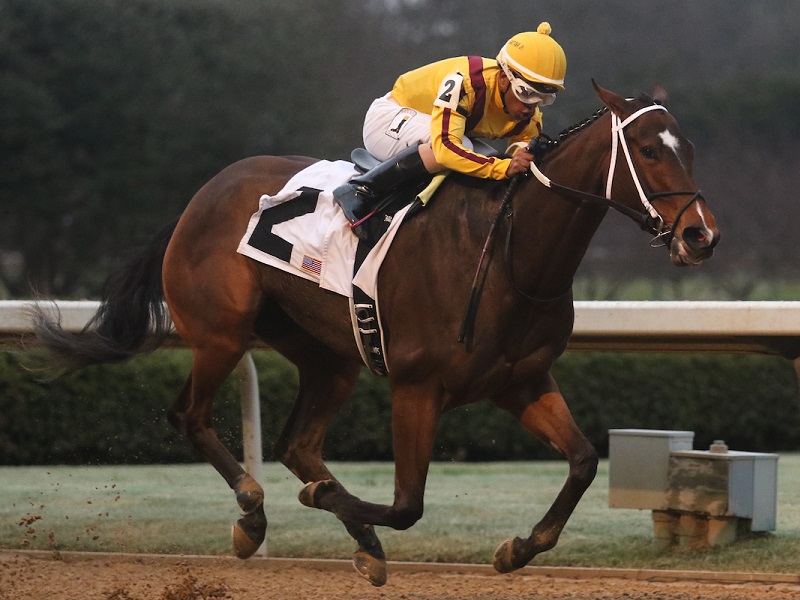 SARATOGA SPRINGS, N.Y. - Set to make her first start since an eye-catching performance in the Grade 3 Dupont Distaff Stakes at Pimlico Race Couse on May 17, Stonestreet Stables' Terra Promessa will headline Sunday's Grade 3, $200,000 Shuvee for fillies and mares 3-years-old and up at 1 1/8 miles.

A 4-year-old home-bred daughter of two-time Horse of the Year Curlin, who was also trained by Hall of Famer Steve Asmussen, Terra Promessa has three wins from five starts this year. She began her campaign at Oaklawn Park, wheeling off back-to-back wins in the Pippin and Grade 3 Bayakoa before running a disappointing fifth in the Grade 2 Azeri. Rebounding to run second in the Grade 1 Apple Blossom. Last out, she went wire-to-wire to win by 7½ lengths. Asmussen is hoping her recent out-of-town form will transfer successfully the Spa.

"She's a lovely filly and we're just proud of the mare she's developed into being a daughter of Curlin," said Asmussen. "She's been very consistent, and recently she's gotten better with age. We were very happy with the quality race she ran at Oaklawn. That had been the only place she had stakes success so far, so for her to carry that form into Pimlico makes us feel good coming into this race."

With Jose Ortiz aboard, Terra Promessa will leave from post 3.

Returning to the races after a gutsy performance in the Grade 1 Ogden Phipps, where she finished one-length behind Eclipse Award winner Songbird, Paid Up Subscriber will look to reach the winners circle for trainer Chad Brown and owners Allen Stable and Peter Brandt.

"Her final work heading into this race was terrific," said Brown. "We've had her on target for this race so we're excited to run."

Hall of Famer John Velazquez will ride from post 2.

Rounding out the is Apologynotaccepted for Hall of Fame trainer Bill Mott and owner Gary Barber.

A 6-year-old daughter of Fusaichi Pegasus, she has three  and a second from four starts this year. Most recently. she raced on the lead before being caught by Forever Unbridled in the stretch in the Grade 2 Fleur De Lis on June at 17 Churchill Downs.

With Luis Saez aboard, the pair will leave from post 1.