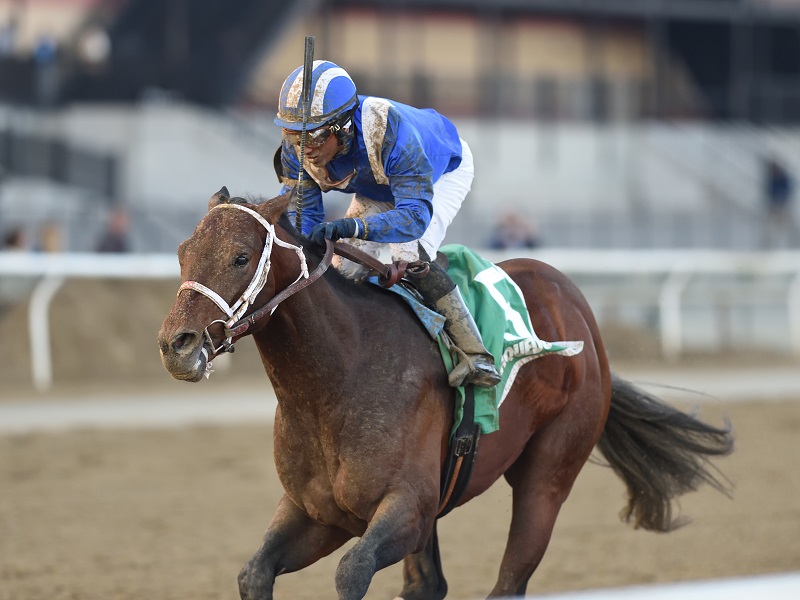 The Wood Memorial, which offers 100-40-20-10 Kentucky Derby qualifying points to the top-four finishers, is slated for an approximate post time of 6 p.m. ET and will be part of a live national broadcast on NBCSN from 5:30-7:30 p.m., scheduled to also include the Grade 2 Blue Grass at Keeneland and the Grade 1 Santa Anita Derby from Santa Anita Park.

Prior to the NBCSN broadcast, FOX Sports Saturday At The Races will air the major stakes, including the Grade 1 Carter, leading up to the Wood Memorial with national coverage on FS2 beginning at 4 p.m. and regional coverage in the tri-state area on MSG+ starting at 3 p.m.

The dark bay son of Arch was claimed for $50,000 on October 21 out of a winning effort at Keeneland and promptly shipped to Aqueduct, where he ran third in the Grade 2 Remsen over nine furlongs on the Big A main.

Tax, who currently boasts 12 Derby qualifying points, arrives at Saturday's test from a determined head score on February 9 over Wood rival Not That Brady in the Grade 3 Withers.

"He's a warrior. You have to get lucky and get a horse who wants to win as much as you want to win, and that's the kind of horse he is. He wants to win," continued Gargan. "He wants to run competitive, and he trains like that. He's real competitive in the mornings, so we just have to keep our fingers crossed and hope for good things going forward because the big goal is to be lucky enough to run him in the Derby."

Junior Alvarado has the return call aboard Tax from the inside post in a field of 11.

"Junior has a lot of insight into him. If it's working well, why change it? When a rider has confidence like that, it can only help," said Gargan.

Juddmonte Farms homebred Tacitus, by Tapit out of 2014 Eclipse Champion Older Mare Close Hatches, graduated on November 10 at Aqueduct at second asking when traveling one-mile over a track labeled good.

The talented bay, trained by Hall of Famer Bill Mott, wintered at Payson Park in Florida ahead of a successful seasonal debut in the Grade 2 Tampa Bay Derby when 1 ¼-lengths the better of Wood rival Outshine. He picked up 50 Derby qualifying points in victory.

Jose Ortiz, aboard for all three career starts, will pilot Tacitus from post 2.

Shadwell Stable homebred Haikal will try two turns for the first time in the Wood. The Daaher bay is a neck away from being undefeated after narrowly missing to stakes-placed Family Biz in his debut.

The late-moving Haikal broke his maiden on December 15 at Aqueduct in a six furlong sprint and used a similar style in his 3-year-old debut when rallying to a neck score over Wood rival Joevia.

Trained by Kiaran McLaughlin, who won the Wood in 2015 with Frosted, Haikal arrives at his stamina test from a closing length score in the Grade 3 Gotham, which earned him 50 Derby qualifying points.

McLaughlin said he is hopeful that Haikal will be more forwardly placed on Saturday.

"The only question is the two turns, but we feel like it'll be no problem. Hopefully he won't be as far back as he was last time," said McLaughlin. "He could be in the middle of the pack or last, but he won't be 15 lengths off the pace like last time. He has a great mind and the post doesn't matter with him. We'll be behind most of the horses and so we'll be able to save ground."

McLaughlin, who also conditioned Haikal's Canadian-bred sire Daaher, said that his Wood hopeful is a little more sizable than the stallion who captured the Grade 1 Cigar Mile in 2007.

"The sire was very classy. This horse is a little bigger and taller than his sire and has more size to him. But we like him, and he's already won three in a row, so hopefully we can keep it going on Saturday," said McLaughlin.

Rajiv Maragh, who is undefeated aboard Haikal, will guide the bay colt from post 4.

Todd Pletcher, a five-time winner of the Wood, and Jason Servis will each saddle a pair of Wood starters.

Pletcher previously won the Wood with Eskendereya (2010), Gemologist (2012), Verrazano (2013), Outwork (2016) and last year with Vino Rosso. On Saturday, he will send out the runners-up from both the Grade 2 Tampa Bay Derby and Pasco at Tampa Bay Downs.

Outshine, owned by Let's Go Stable and Richard Schibell, boasts a record of 2-1-0 from four starts and arrives at the Wood from a game second to Tacitus in the Tampa Bay Derby.

Pletcher said that Outshine has trained well since his Tampa Bay Derby effort.

"He came out of it super and has been training very forwardly," said Pletcher. "We're excited about stretching him out to a mile and an eighth. We've been pointing to the Wood since the Tampa Bay Derby and we're optimistic from what we're seeing."

Hall of Famer John Velazquez has the call aboard the Malibu Moon bay from post 10.

The chestnut colt followed that effort with a second-place finish in the Pasco in a troubled trip that saw Overdeliver bobble at the break in the seven-furlong test.

Pletcher said the decision to come to the Wood was made based on Overdeliver's strong showing during morning training at Palm Beach Downs.

"We didn't really have a firm plan after the Pasco. It's really just been based on his last three works that he's trained exceptionally well that we decided to take a shot at the Wood. I think his last couple works he's shown some really strong gallop outs and indicates that he's capable of stretching out," said Pletcher.

Kendrick Carmouche has the call aboard Overdeliver from post 6.

Servis, who won the Florida Derby last weekend with longshot Maximum Security for Gary and Mary West, will team up with the Wests once more when saddling optional-claiming winner Final Jeopardy and maiden winner Grumps Little Tots in the Wood.

Final Jeopardy, a Street Sense bay purchased for $110,000 at the Keeneland November sale, graduated at first asking when sprinting six furlongs on December 9 at Gulfstream Park.

Following a troubled trip when third in the six-furlong Limehouse at the Hallandale oval, Final Jeopardy returned to win a one-mile optional-claiming tilt by a widening 3 ¾-lengths.

Grumps Little Tots, owned by Michael Dubb, Coyle Boys Stable and Bethlehem Stables, hit the board in a trio of sprint events before graduating last out when stretched out to a one-turn mile at the Big A.

The dark bay son of Sky Mesa will boast the services of Jose Lezcano from post 8.

Not That Brady, bred in New York by KatieRich Farms, will look to bounce back from an uncharacteristic eighth last time out in the Grade 3 Gotham. The Big Brown chestnut, owned in part by conditioner Rudy Rodriguez with Michael Imperio, Lianna Stables, and R. A. Hill Stable, is out of the popular Lisa's Booby Trap.

Not That Brady captured the Damon Runyon here on December 31 and proved his class with a strong second over nine furlongs in the Grade 3 Withers.

Rodriguez has named Reylu Gutierrez for the return engagement from post 7.

Michael and Jeff Fazio's Joevia, trained by Gregory Sacco, graduated at first asking before battling to a narrow neck defeat behind Haikal in the Jimmy Winfield. Last out, the Shanghai Bobby colt finished second in the Private Terms at Laurel Park.

Nik Juarez will ride Joevia from the outermost post.

Hoffa's Union earned a lofty 95 Beyer Speed Figure in his February 28 debut at Laurel Park, wiring a field of six by 15 ½-lengths in a 1 1/16-mile maiden event. Trained by Gary Capuano for Non Stop Stable, Rose Petal Stable and Foard J. Wilgis, the Union Rags bay will face a class test when stepping up against winners for the first time.

Dylan Davis has the call aboard Hoffa's Union from post 3.

Completing the field is Math Wizard, trained by Saffie Joseph, Jr., who has been claimed three times in seven starts. The Algorithms chestnut, owned in part by his conditioner with John Fanelli, Collarmele Vitelli Stables, Bassett Stables, Ioannis Zoumas, and Wynwood Thoroughbreds, boasts a record of 2-1-1.

Claimed for his current connections for $25,000 from an impressive 18 ½-length win in a one-mile claiming tilt at Gulfstream Park, Math Wizard returned to finish a rallying second at the same track and distance in an optional-claiming event that earned a career-best 85 Beyer number.

The Wood Memorial is slated as Race 10 on Saturday's 11-race card.