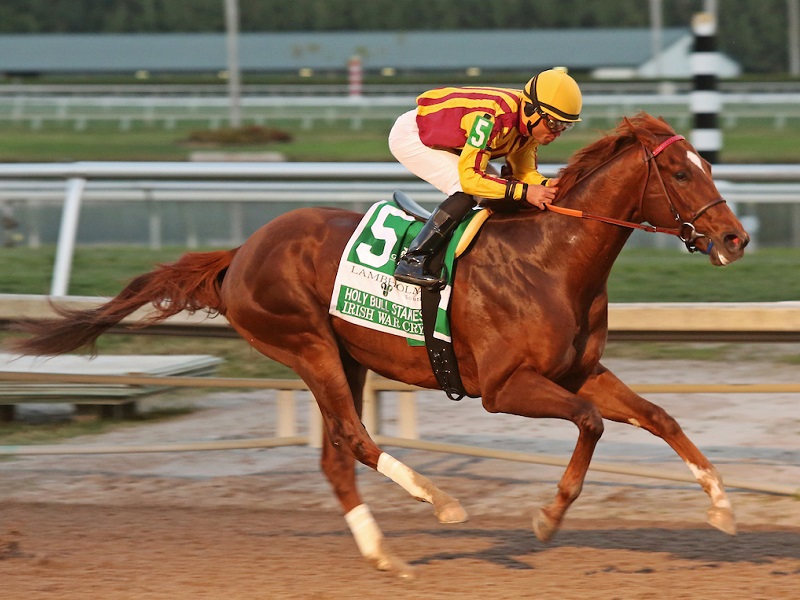 OCEANPORT, N.J. – Isabelle de Tomaso’s Irish War Cry, the epitome of a “house horse,” will break from the rail as the favorite in Sunday’s 50th running of the $1 million betfair.com Haskell Invitational at Monmouth Park.

An ultra-competitive field of seven was drawn for the mile and an eighth Grade 1 fixture here Thursday, including Battle of Midway, a strong third in the Kentucky Derby, and Timeline, who is unbeaten in four lifetime starts.

The Haskell will be run as the 12th event on a 14-race card, with post time set at 5:47 p.m. The race will be televised live on the NBC Network.

But it is Irish War Cry, who ran second in the Belmont Stakes last out, who carries the weight of 5-2 favoritism and the burden of trying to become the second New Jersey-bred Haskell winner in half a century, and the first since Thanks to Tony in 1980. The “house horse” tag comes from the fact that he is owned by Mrs. de Tomaso, who is a daughter of the late Amory L. Haskell, for whom the race is named. Mrs. De Tomaso and her sister, Hope Haskell Jones, present the trophy for the race to the winning owner every year. Presenting it to themselves would be a first.

“Yeah, no pressure, right?” trainer Graham Motion said after the draw, and you could hear the smile come across the phone lines.

“We’re very excited to be here. The Haskell was always our goal for the summer with Irish War Cry.”

Motion was not as thrilled to have his horse start from the rail, but said, “better inside than outside.”

Irish War Cry, a son of Curlin, became a big player on the Triple Crown trail with his daylight victory in the Wood Memorial in April. In the Kentucky Derby, however, the colt was involved in a multi-horse melee leaving the gate, showed speed for a mile and then retreated to finish 10th.

Motion elected to skip the Preakness and pointed for the Belmont. Irish War Cry led for most of the mile and a half, but was passed by Tapwrit in the final 50 yards.

“He had a tough race in the Belmont, and we were very proud of him,” Motion said, “but he came out well and he has not missed any training.”

Second choice at 3-1 is Timeline, one of two Haskell entrants trained by Chad Brown. The son of Hard Spun ran his way into the Haskell with a brilliant score in the Grade 3 Pegasus Stakes at Monmouth on June 18. It was his fourth victory in four lifetime starts.

“I’ve had my eye on the Haskell for him a long time,” Brown said. “He’s had a race over the track now, and I think a mile and an eighth will be his best trip.

“He won the Pegasus easily, but he overcame a sprung shoe and early bumping to do it. He’s a tough horse, but he has to come with his ‘A’ game Sunday.”

Practical Joke, third choice at 4-1, has won four of his eight lifetime starts, but has never been successful around two turns. He finished fifth in the Kentucky Derby after running second in the Blue Grass Stakes at nine furlongs.

“I’m confident he can handle a mile and an eighth,” Brown said. “He ran well in the Blue Grass around two turns. He’s training well enough, and it’s worth a try. But if he doesn’t run well Sunday, he’ll probably never go two turns again.”

Jerry Hollendorfer, who won the 1989 running of the Haskell with King Glorious, sends out the intriguing Battle of Midway on Sunday. The Smart Strike colt ran a huge race in the Derby and finished third at 40-1 behind Always Dreaming and Lookin at Lee. He warmed up for the Haskell by running away with the Grade 3 Affirmed Stakes on June 24.

“I think his strongest point is that he’s versatile,” Hollendorfer said. “Now that the field is drawn, we can make a tactical plan for the race.”

Girvin, who was caught in the final stride by Irap in the Ohio Derby last out, has been working strongly for the Haskell.

“That was a tough beat,” trainer Joe Sharp said. “But we are happy with how he came out of the race. He’s been moving forward every day. He doesn’t know he got beat.”

Sharp said that the colt’s quarter-crack problems seem all behind him.

McCracken, who ran third in the Blue Grass as the favorite, was another caught in the Derby melee and he went on to finish eighth as one of the favorites. The Ghostzapper colt, who has been near the top of the 3-year-old champion chatter, got back on track last out when he won the Matt Winn Stakes at Churchill Downs by two and a half lengths.

“He’s really on his game now,” trainer Ian Wilkes said. “I have a lot of confidence in him, but he’s got to go out and do it. It’s his turn to do the talking.”

Hence, trained by Steve Asmussen, comes in to the Haskell off a victory in the Iowa Derby. He won the Sunland Park Derby in March, but then ran 11th in the Kentucky Derby.