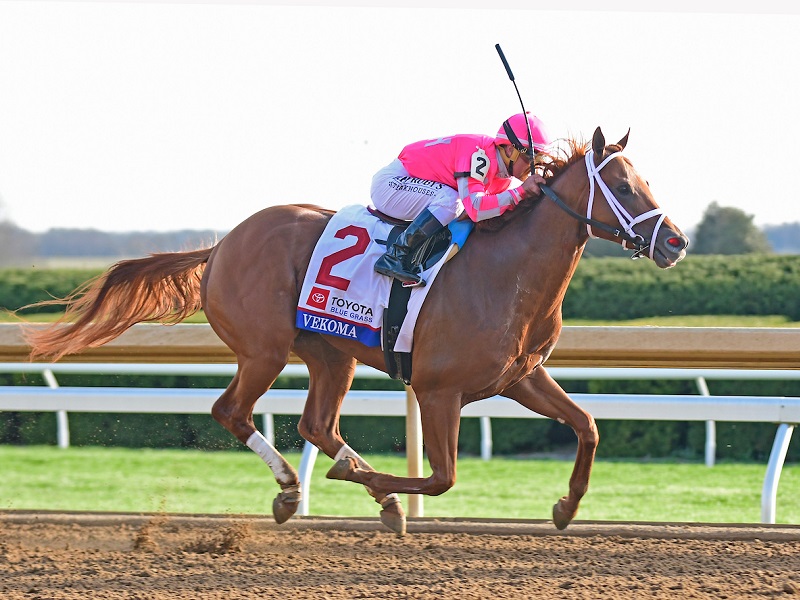 Gatsas Stable and R.A. Hill Stable’s Vekoma took command from Somelikeithotbrown in the middle of the far turn and went on to post a 3½-length victory over Win Win Win in the 95th running of the $1 million Toyota Blue Grass (G2) for 3-year-olds before a crowd of 34,775, a record for an opening Saturday of a Keeneland meet.

Trained by George Weaver and ridden by Javier Castellano, Vekoma covered the 1 1/8 miles on a fast main track in 1:50.93. It was the first victory in the race for Weaver and Castellano. Vekoma became first horse since Coaltown in 1948 to win the race in only his fourth career start.

The victory was worth 100 points on the road to the $3 million Kentucky Derby Presented by Woodford Reserve (G1), to be run May 4 at Churchill Downs, and gives Vekoma a total of 110, second on the leaderboard. That is more than enough to earn a spot in the starting gate, which is limited to the top 20 point earners and invitees that pass the entry box.

Somelikeithotbrown took the early lead out of post position one with Vekoma closely tracking in second through fractions of :23.26, :47.03 and 1:11.55. On the far turn, Castellano sent Vekoma after the leader and, entering the stretch, quickly opened up.

Signalman moved into second at midstretch only to have Win Win Win nip him at the wire for the runner-up spot.

A Keeneland September Yearling Sale purchase, Vekoma is a Kentucky-bred son of Candy Ride (ARG) out of the Speightstown mare Mona de Momma. The $600,000 winner’s check boosted his earnings to $788,850 with a record of 4-3-0-1.

It was another three-quarters of a length back to Somelikeithotbrown in fourth with Chess Chief, So Alive, Sir Winston, Admire, Moonster, Lucky Lee, Market King, Aquadini, Dream Maker and Parsimony following in order.