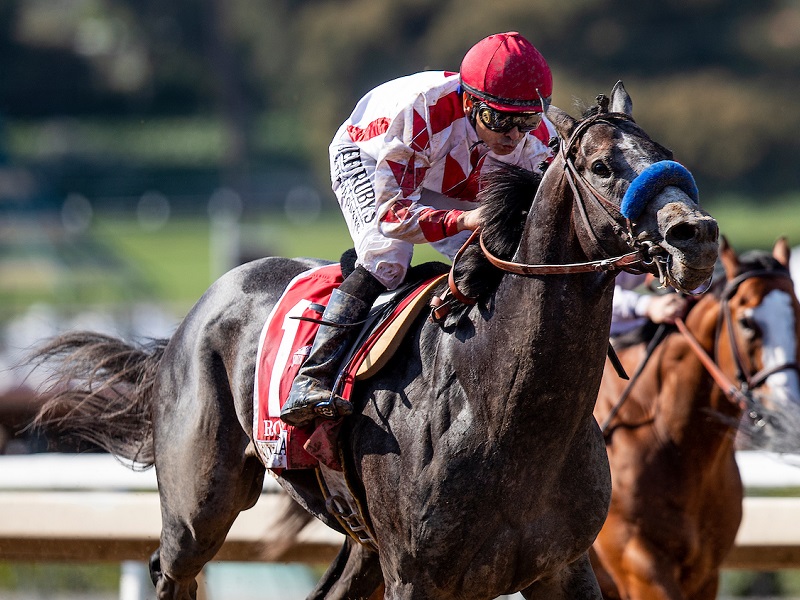 MIKE SMITH, ROADSTER, WINNER:  “We knew before he and Game Winner started running that they both had ability. They were breezing by the competition like this and putting them away. We weren’t sure which one was better. The first time he ran for me he showed he had all the gears. The second time he had the problem with his wind. We fixed that and he’s doing all the right things. We got a good break and then we dropped back. He took a breather, while the others were going out there quick. When I asked him again, he was gone.”

JOEL ROSARIO, GAME WINNER, SECOND: “I moved a little bit soon because they weren’t putting much pressure on Instagrand, but they weren’t going too fast up front so I was comfortable with my position. He got a little bit tired the last part, that’s why Roadster got by me.”

FLAVIEN PRAT, INSTAGRAND, THIRD:  “I though he ran very well. At the quarter pole, I thought maybe I was done, but he switched leads and made a good run.”

BOB BAFFERT, ROADSTER, WINNER, & GAME WINNER, SECOND: “They’re two good horses. Game Winner was out there by himself and when he gets by himself . . . he needs company. It was a good, hard race for both of them, and coming in, that’s what you want to see. This track is deep and slow, but it’s safe, and that’s what we wanted. I couldn’t be happier. We knew that Roadster needed to win or run second (for Kentucky Derby qualifying points, 100 to the winner, 40 to the runner-up).

“It was a great finish. They were both finishing well, they were fighting; Game Winner is a fighter. It was a great stretch run . . . at the eighth pole I knew I was going to win, I just didn’t know which one, but it was exciting. They’ll both like a mile and a quarter (distance of Kentucky Derby on May 4). I think Game Winner’s next race will be better. I’ve been bringing him along really easy.

“Roadster is a light horse but always shown brilliance from day one. We’re just lucky we were able to bring him back, because after Del Mar I was worried that maybe the (throat) surgery didn’t go well, because it could’ve gone worse. But I couldn’t thank the surgeon that did it enough. He’s one of the best in the business and I’ve never had issues with it. His breathing is not an issue . . . Today he passed the test to know he’s good enough to go to the Big Show.

“I left strategy up to my riders. Rosario and Mike know what it is to be at that high level. They did not have any instructions at all. They were on their own and they know their horses. They rode great races . . . We’re there, we’ve just got to keep them happy and healthy, enjoy the ride, the moment. It’s hard to get to this moment. What I love the best is there’s not a better feeling than there was today.

“The fans, despite what they’ve reading, they showed up, they’re here to watch good racing, they bring their family, they’ll always remember the Santa Anita Derby. It was so comforting to see all these fans here and get behind us. They know at the end of the day we love our horses. We wake up worrying about them, we go to sleep worrying about them. To me, that’s what made this a great day.”

PETER FLUOR, OWNER SPEEDWAY STABLE, LLC, ROADSTER, WINNER: "I thought he would've been closer to the lead frankly, but it was cool to see him run a different kind of race. He’s been running second and then accelerating. Today, I’m proud of him for coming from off the pace like that. I wasn’t too thrilled about things halfway through the race, but Mike said he’s got gears and he showed it today. Hopefully, he comes out of it well and we can go on to the Derby. Mike did a good job keeping him relaxed and obviously he had to make a move at the top of the stretch and you're always waiting for a horse to make a move. He did just that, so happy ending. But, like I said, I thought we would've been closer up front. That was absolutely thrilling."