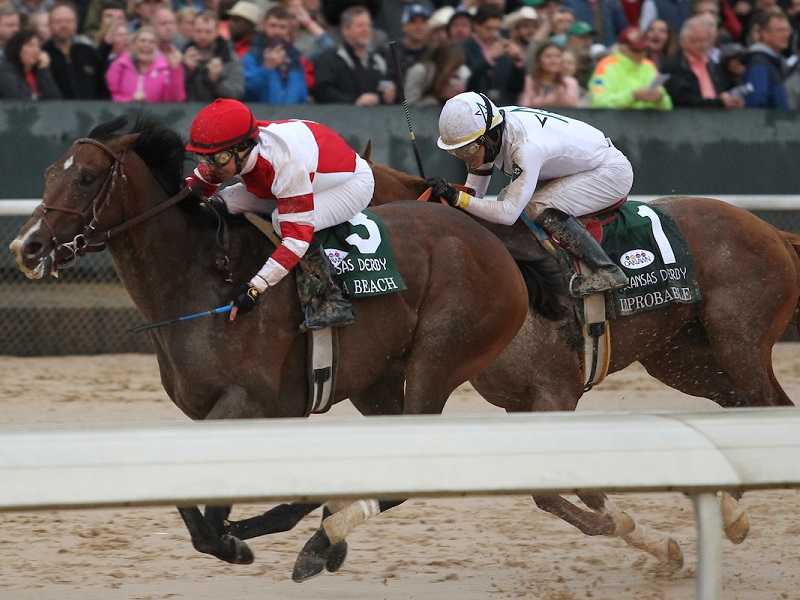 Fox Hill Farm’s Rebel Stakes (G2) winner Omaha Beach returned to Hot Springs from his California base to post an even more impressive victory in Saturday’s $1 million Arkansas Derby (G1) before a rain-drenched crowd of 45,000.

Omaha Beach, breaking from post three under Hall of Fame jockey Mike Smith, broke well and was fifth early as longshot One Flew South led for the opening quarter mile in :23. The 8-5 favorite angled four wide on the first turn, assumed the lead by a half mile in :47 2/5 and never looked back. The Bob Baffert-trained Improbable, the 9-5 second choice, was restless in the gate, broke sixth and moved his way into second by the time the field reached the homestretch, but could not reach Omaha Beach, who won by one length in 1:49 4/5 for 1 1/8-miles on a sloppy track. Country House, who was 10th at the half-mile mark, made a huge run, closing late to be third.

Omaha Beach earned 100 points for his Arkansas Derby victory and is now second on the Kentucky Derby leaderboard with 137.5 points. Improbable earned 40 points for second and is safely in the Kentucky Derby field as the 11th horse on the list with 65 points. Country House earned 20 points to bring his total to 50 and is 15th on the list of 20 horses guaranteed a spot in the gate for the “Run for the Roses,” Saturday, May 4, closing day of the 2019 Oaklawn season.

Winning trainer Richard Mandella, Omaha Beach: “He looked like he was well within himself and Mike (Smith) just let him enjoy his job, just stride out and go where he went. My first thought was, ‘Jeez, don’t move too quick’ and then I thought, ‘Don’t be second-guessing Mike Smith’ – one of the greatest of all times. Just appreciate having him and can’t tell you how much I appreciate this horse and his owner (Rick Porter). We’d already ran in the slop at home, so that wasn’t much of a concern. He’s a very tractable horse. I don’t think we need to pick a surface.”

Winning Owner Rick Porter, Omaha Beach: “I think the horse certainly fits with the other horses. We’ll see how he comes out of the race and see how things are going. We’ll decide, probably, tonight (regarding the Kentucky Derby).”

Winning jockey Mike Smith, Omaha Beach: I had a great trip. Little nerve wracking in the gate because a few of them didn’t want to load, but he handled it all well. He got a little uptight, but then relaxed. He jumped extremely well. There were several horses that wanted the lead. Mr. Mandella has been teaching him in the morning to break off strong and then relax. He did just that. Picked a nice little spot and stayed right there. His cruising speed just takes him up there. I just basically tried to stay out of way. He’s doing is to easy, I’m better off letting him than fighting him.

On having to make a decision between Omaha Beach and Santa Anita Derby winner Roadster on who to ride in the Kentucky Derby May 4: “It’s a lovely decision to have. We’re going to go back and see how everyone comes back and go from there. Evaluate the situation. Then my agent will make the decision. That’s why I pay him.”

Trainer Bob Baffert, second with Improbable: “The horse, happy with the way he ran. I was a little bit worried in the starting gate. He was acting up in there. I had a few moments there of maybe he was going to rear up or do something and get left. Luckily, they unloaded him and put him back and he left there well. I thought Jose Ortiz did a masterful job of riding him. We got beat by a good horse. They showed how these California horses are good horses.”

Baffert said Improbable will be pointed for the Kentucky Derby, adding he believes the colt doesn’t need blinkers (raced in the equipment for the first time in the Arkansas Derby).

Trainer Bill Mott, third with Country House: “We’ll talk to the owners (about the Kentucky Derby). That’s what we were looking for (points), and he ran well.”

Jockey Ricardo Santana Jr., fourth on Laughing Fox: “We had a great trip. We didn’t win, but I feel like we did because he improved so much off his last race. He’s a good horse.”