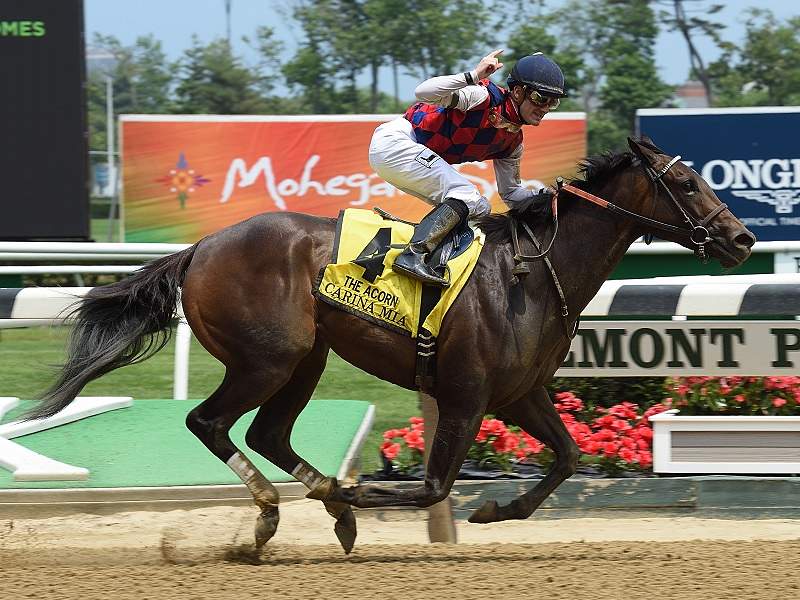 Three Chimneys Farm's Carina Mia will look to capitalize on some class relief in her first start for trainer Chad Brown as part of a field of 10 fillies and mares 4-years-old and up in Wednesday's $100,000 Shine Again at seven furlongs on Saratoga Race Course's main track.

Carina Mia enters having run in seven consecutive Grade 1 races while under the care of Hall of Famer Bill Mott, including a win in the 2016 Acorn. The 4-year-old daughter of Malibu Moon is coming off a fourth-place finish in the Grade 1 Ogden Phipps on June 10, Belmont Stakes Day, and has registered 90-or-better Beyers in seven of her last right races.

In the third race following a freshening after the Grade 1 Breeders' Cup Filly & Mare Sprint that capped her 2016 campaign, Carina Mia will break from post 3 with Javier Castellano aboard.

Fellow Brown trainee Going for Broke will make her first appearance at the races since a third-place finish in the Grade 3 Comely on November 26 at Aqueduct Racetrack. The 4-year-old will be running at the Spa for the first time since a runner-up effort in the Grade 1 Alabama on August 20.

Going for Broke, 3-2-1 from seven starts, will be cutting back to the Shine Again distance after his last four starts coming in routes of greater than a mile. Irad Ortiz, Jr. will leave from the rail.

Indulgent will also drop down in class for trainer Kiaran McLaughlin. After a troubled trip in the Grade 3 Bed o' Roses, the 4-year-old daughter of Bernardini will look to recapture the form that led to a runner-up performance in the Grade 3 Distaff Handicap on April 7 at Aqueduct. Luis Saez will be in the irons from post 2.

Graded stakes veteran Birdatthewire, for trainer Tom Proctor, will be seeking his first win since the 2015 Grade 1 La Brea. Her last start at Saratoga saw her overcome a sluggish start to finish fourth in the Grade 1 Ballerina on August 27. Jockey Jose Ortiz has the call from post 6.

Zito will saddle Wheatfield, who had made five straight graded stakes starts, getting a piece of the purse in running second to Distina in the Grade 2 Inside Information on March 18 at Gulfstream Park. Exiting the outside post, the 5-year-old will have the services of jockey Tyler Gaffalione.

Rounding out the field is Repole Stable's Clipthecouponannie, a Pletcher trainee who will break from post 7 with Hall of Famer John Velazquez; Discreet Senorita, for trainer David Jacobson, from post 4 with Ricardo Santana, Jr. aboard, Momameamaria, a 5-year-old Quality Road mare for trainer David Cannizzo from post 8; Absatootly, fresh off a second-place output in the Dancin Renee, out of post 5 for trainer Charlie Baker; and Pawleys Express, making her takes debut for trainer Ralph Nicks out of post 9.