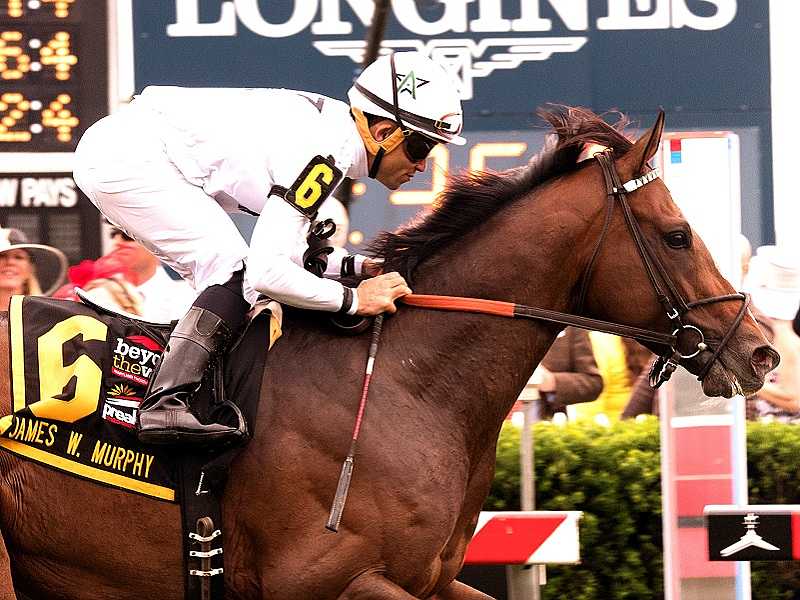 SARATOGA SPRINGS, N.Y. - Before a new set of Racing Hall of Fame inductees are installed on Monday a few connections look to add to their resumes in The Grade 2, $200,000 National Museum of Racing Hall of Fame at 1 1/16 miles on the Mellon turf. The race is a wide-open affair with a field of 10 that offers talent and versatility that will interest bettors as well as the connections involved.

Team D Stable's Big Handsome will step up to graded company for the first time following his second-place finish to Bricks and Mortar in the Manila at Belmont Park. The Street Boss colt ran a wide, troubled trip that day after rattling off three consecutive wins ending with the Paradise Creek. Big Handsome will get added ground, but should be able to handle it according to trainer Anthony Dutrow.

"He had a lot of turf in his pedigree and he finished second [on the dirt] at Belmont as a baby and came back and finished third as a baby," Dutrow said. "But we weren't seeing what we knew he was capable of. He showed so much more in the mornings than we were seeing in his races, so we put him on the turf and he's been very good. He's gone from six [furlongs] to seven to a mile. He's tackling two turns for the first time but we feel very good about him."

Big Handsome will start from post 2, and will have the services of 2017 inductee Javier Castellano.

Winstar Farms and Head of Plains Partners' Yoshida may get a bit of class relief, and a better pace scenario after being victimized by a slow pace set by Oscar Performance in the Grade 1 Belmont Derby. The colt by Heart's Cry made only his fourth career start after breaking his maiden and returning to win the James W. Murphy at Pimlico. Yoshida, who finished fifth in the Belmont Derby as the 3-1 favorite, has been training well, according to Hall of Fame trainer Bill Mott, and this spot looked like the right one.

"He's good. He breezed in forty-nine, work was good, and he cooled out well," said Mott.

Yoshida will depart from post 9 and will have Irad Ortiz, Jr. in the saddle.

Allen Stable's Secretary At War, third behind Hall of Fame rivals Bricks and Mortar and Big Handsome in the Manila at Belmont, will look to extend his speed over the tighter Saratoga turf for trainer Jimmy Jerkens.

"He's doing good, training good," Jerkens said. "I didn't look at the race. I don't worry about the competition. It's not like I don't worry, but there's not much you can do about it, just get them as good as I can."

Secretary At War will break from post 4 and gets Hall of Fame rider John Velazquez.

Klaravich Stables and William H. Lawrence's colt Bricks and Mortar looks to be perfect through four starts after tallying three wins with his last in a late rush in the $100,000 Manila. The son of Giant's Causeway will step up and face the toughest competition thus far, but has been working well towards this for trainer Chad Brown.

Bricks and Mortar will run from post 8 and has Joel Rosario in the irons.

Rounding out the field for the Hall of Fame are Arklow, Snap Decision, Makarios, Bonus Points, and Parlor. Caviar Czar is entered for the main track only.