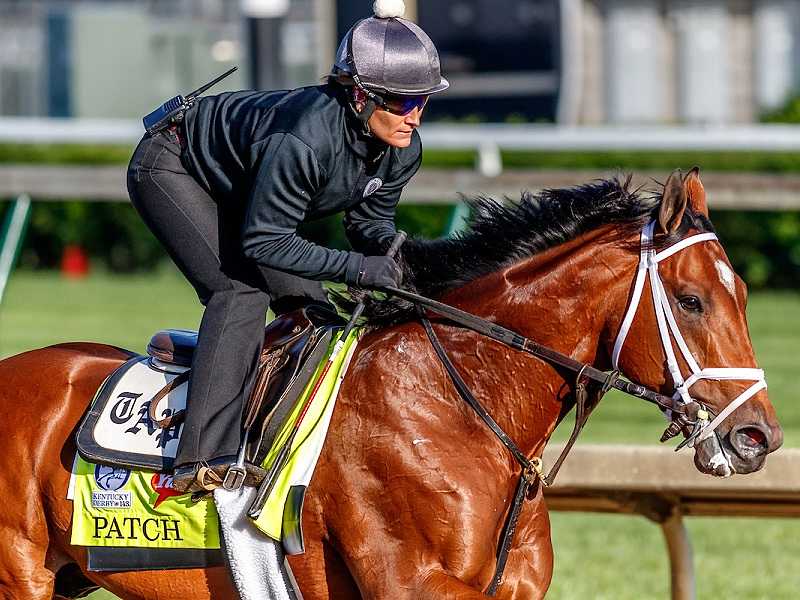 The Grade III Derby at 1 1/8 miles is the eighth race on a nine-race program that begins at the special time of 2 p.m. Probable post time for the Derby is 5:21 p.m.

All starters will carry 118 pounds.

Among the entrants are two colts who last raced in the Grade I Belmont Stakes June 10 in New York and have been looking for a spot to begin their summer and fall campaigns. Many of the others have raced well recently in stakes from the East Coast to California.

Calumet Farm’s Patch, a Union Rags colt, finished third, beaten 7 ¾ lengths, in the Belmont, while L&N Racing’s Lookin At Lee, by Lookin At Lucky, finished 28 ¼ lengths behind the victorious Tapwrit in the 1 ½ mile classic. The latter, however, rallied for second in the Grade I Kentucky Derby, while Patch finished 14th in the first leg of the Triple Crown.

Many eyes were on Patch in the lead-up to the Kentucky Derby, and not only because he finished second in the Grade II Louisiana Derby behind Girvin. The Union Rags colt races with one eye—the left one was removed because of ailment after he began training as a 2-year-old—but it has been business as usual for the colt.

Girvin, meanwhile, on July 30 won the $1 million Haskell Invitational, a Grade I event at Monmouth Park in New Jersey.

Patch, who drew post position 3 in the West Virginia Derby, has finished first, second or third in four of his five starts. His lone victory came in maiden special weight company Feb. 18 in Florida; in his career debut he finished second behind Impressive Edge, who also is entered in the Derby.

Trainer Todd Pletcher, who won the 2015 West Virginia Derby with Madefromlucky, had nominated Patch to multiple 3-year-old stakes the last weekend in July but settled on a trip to West Virginia. In 2004 Pletcher trained Pollard’s Vision, who was blind in one eye, to a second-place finish in the West Virginia Derby.

“He’s going there because of good timing for the race,” Pletcher said July 31 after the post-position draw. “I plan to have him on the grounds Friday.”

Tyler Gaffalione will be in from Florida to ride Patch as well as Madefromlucky, who will return to Mountaineer for the $200,000 West Virginia Governor’s Stakes for 3-year-olds and up at 1 1/16 miles.

Lookin At Lee, the only multiple Grade I-placed horse in the West Virginia Derby—he finished third in the Arkansas Derby—has been a confirmed closer since he went two turns for the first time last September. He has been working regularly at Saratoga Race Course for trainer Steve Asmussen—he has won the West Virginia Derby five times—and has been pointed for the Mountaineer race.

Michael Levinson, part owner and stable manager for L&N Racing, indicated in late July the group had made up its mind to ship Lookin At Lee, who drew post 8, to Mountaineer. Corey Lanerie, who rode the colt in the Kentucky Derby, has the call.

Trainer Dale Romans, who won the West Virginia Derby with Bright One in 2006, has entered a pair of colts: NK Racing’s Impressive Edge, who held his own against some of the top-rated 3-year-olds in the spring, and Albaugh Family Stable’s Watch Me Whip, who finished a closing fourth behind multiple graded stakes-winner Irap in the Grade II Indiana Derby in his last start July 15.

Impressive Edge, by Harlan’s Holiday, romped in a seven-furlong allowance race at Gulfstream Park March 5 and resurfaced in the Grade I Florida Derby at 1 1/8 miles. He loomed a threat on the final turn but flattened out to finish fourth behind the victorious Always Dreaming, who in his next start won the Grade I Kentucky Derby.

After an even third-place finish behind then-undefeated Timeline in the Grade III Peter Pan Stakes May 13 at Belmont Park, Impressive Edge returned July 7 for the Grade III Iowa Derby, in which he battled for the lead until late in the stretch and checked in third.

He will break from post 5 with Robby Albarado named to ride.

Watch Me Whip has made only four starts thus far but did well to rally from 10th and last to fourth in the Indiana Derby in his first try in a graded stakes. He finished almost four lengths behind Colonelsdarktemper, who finished second for four-time Indianapolis 500 winner A.J. Foyt and is also entered in the West Virginia Derby.

Watch Me Whip would break from the gate next to his stablemate in post 6 with Albarado named. Romans didn’t indicated whether he plans to run one or both colts.

Though Irap, who also won the Grade II Blue Grass Stakes in Kentucky in the spring and the Grade III Ohio Derby in late June, is expected for the Grade I Travers Stakes at Saratoga later in August, his owner, Reddam Racing, will ship the homebred Square Eddie colt B Squared from California to Mountaineer.

After racing in California-bred events in his first four races for trainer Doug O’Neill, B Squared moved up to Grade III company with some success. He finished second to Battle of Midway in the Affirmed Stakes at Santa Anita Park June 24 and in his last start was third behind West Coast in the Los Alamitos Derby July 15.

B Squared will leave the starting gate from post 4 with Mario Gutierrez scheduled to fly in from California for the ride.

Paolucci, an Akron, Ohio, native whose father took him to Mountaineer—then Waterford Park—as a child, entered Game Over, who won his first two starts before finishing fifth in the Ohio Derby. The Mineshaft colt was shipped to Monmouth to train under the eye of Jorge Navarro, who as usual is running away with the leading trainer title at the New Jersey track.

Paolucci, who ran three horses in the Ohio Derby, said of the West Virginia Derby: “Only need one.”

The connections also obtained the services of Mountaineer’s all-time leading rider, Deshawn Parker, who no longer is based at the Hancock County facility but will make a homecoming of sorts for its biggest race. Parker has several other mounts on the Saturday afternoon program.