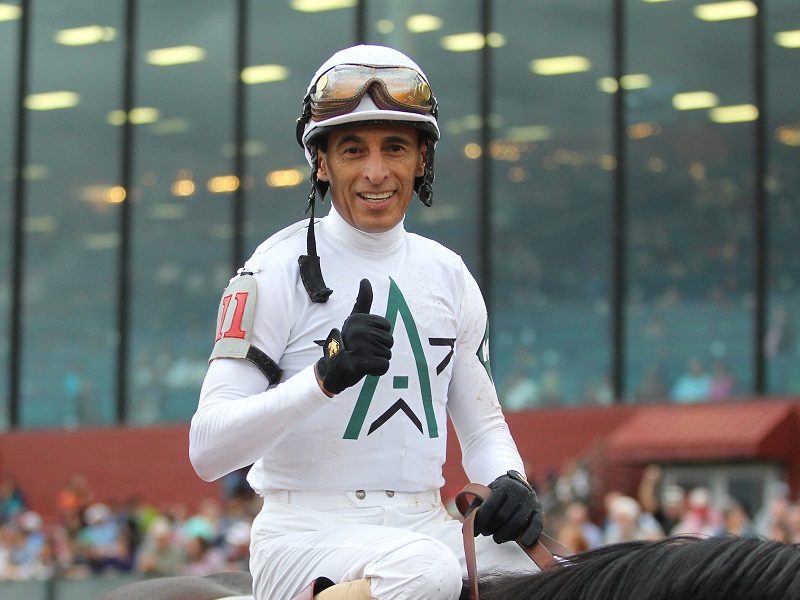 ELMONT, N.Y. - Jockey John Velazquez is already part of an exclusive club when it comes to Kentucky Derby riders. The 2012 Hall of Fame inductee is one of just eight riders to have at least 20 mounts through the Run for the Roses' previous 144 iterations.

Velazquez will have his 21st career Derby mount when he pilots W.S. Farish's Code of Honor on May 4. The winner of the Grade 2 Fountain of Youth on March 2 at Gulfstream Park will be Velazquez's seventh mount in the last eight runnings of the Derby and will mark the colt's Churchill Downs debut off a third-place finish in the Grade 1 Florida Derby on March 30 at Gulfstream.

Code of Honor put in his final breeze on Sunday at Churchill, going four furlongs in 46.80 seconds on the main track; the second-fastest of 76 in the group.

"I saw his work [Sunday] and it looked good, just a little fast, but that's the way it seemed everyone was working," Velazquez said. "He looks like he's doing well, and hopefully he can continue come the race."

Velazquez has won the Triple Crown's opening leg twice, with the Graham Motion-trained Animal Kingdom in 2011 and the Todd Pletcher-conditioned Always Dreaming in 2017. The 47-year-old native of Carolina, Puerto Rico will be looking to become just the 11th jockey all-time with three Derby wins. Bill Hartack and Eddie Arcaro are tied for the all-time lead with five victories apiece.

"It's incredible. This is why we're here," Velazquez said about riding in the Derby. "This is what we dream about. This is one of the races that's well-known throughout the world, so it's exciting to be there."

Velazquez didn't win his first Derby until his 13th try when he led 20-1 shot Animal Kingdom to a 2 ¾-length score eight years ago. He had come close with Invisible Ink running second to Monarchos in 2001, which was the first time he finished on the board in the race.

"It takes some pressure off. You go in with confidence," Velazquez said of his previous wins. "Looking back at the past, riding all those races without winning it, it [humbles] you. But I'm pretty confident, so we'll see what happens. Hopefully, you get a good trip."

Code of Honor, trained by Hall of Famer Shug McGaughey, drew post 13 and is 15-1 on the morning line. McGaughey has saddled one previous Derby winner with Orb in 2013.

Velazquez, a two-time Eclipse Award-winner for Outstanding Jockey for 2004 and 2005, has also won two Belmont Stakes in his career, with Rags to Riches in 2007 and Union Rags in 2012, and has twice finished second in the Preakness.

He is one of just 19 jockeys in North America to amass 6,000 career wins. His career earnings in excess of $402 million is the most in history.