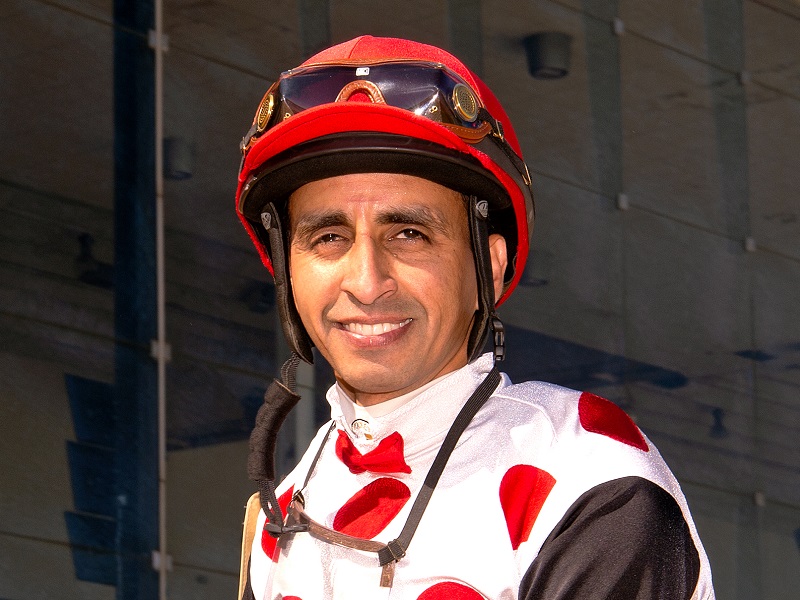 LAUREL, MD – Even after losing the mount on a horse he called one of the best he’s ever ridden – and he has sat on some very good ones – Laurel Park-based journeyman Julian Pimentel didn’t lose his sense of humor.

Pimentel rode Win Win Win to three wins and a second in four tries, including a record-setting triumph in the Jan. 19 Pasco Stakes, but watched from the sidelines as Live Oak’s homebred hit the board in a pair of graded preps to punch his ticket to the Kentucky Derby (G1).

When reigning Eclipse Award winner Irad Ortiz Jr., aboard in each of those races, opted for Improbable in the Derby and the mount on Win Win Win came open again, trainer Mike Trombetta dialed Pimentel.

“He called me and asked if I wanted to ride the horse back. I said, ‘I’ll have to see if I have any plans for that day,’” Pimentel joked. “No, I told him yes right away.”

Columbia-born Pimentel, 38, will be riding in the Derby for the first time in a career that began in 2000 and includes nearly 1,700 wins from more than 10,000 starters. He got his first look at Churchill Downs Sunday, aboard for Win Win Win’s final pre-race breeze.

“It’s definitely something new, but I’ve been to a lot of racetracks before so it’s not like something I haven’t done before,” Pimentel said. “It’s a great opportunity. I am very grateful for the opportunity and very excited and happy about it.”

Pimentel’s experience includes riding a Classic winner. He was up when Union Rags broke his maiden at first asking in July 2011 at Delaware Park, the only time he got on the colt that would go on to win four graded-stakes, two of them Grade 1, capped by the 2012 Belmont Stakes.

In 2017, Pimentel rode Imperial Hint to victory in the General George (G3), the Florida-bred’s first graded triumph. Imperial Hint won a pair of Grade 1s in 2018 and was an Eclipse Award finalist for champion sprinter both years.

More than any other horse, Pimentel is best associated with late Mid-Atlantic legend Ben’s Cat, a winner of 32 races and more than $2.6 million in purse earnings. Pimentel was aboard in 41 of 63 starts, including 30 in a row from June 2012 to November 2015.

Enter Win Win Win. Based with Trombetta’s string at the Fair Hill Training Center in Elkton, Md., he and Pimentel have been together nearly from the beginning, when the jockey began working the horse for Trombetta as a 2-year-old. The Hat Trick colt didn’t debut until late fall at Laurel, winning his unveiling and an optional claiming allowance before finishing a troubled second behind Preakness (G1)-bound Alwaysmining in the Heft Stakes.

“I’ve worked him since he was a baby, and he always worked good. He always showed that he was going to be a nice horse. We didn’t know how nice he was going to be,” Pimentel said. “He’s definitely one of the nicest horses I’ve ever been on, that’s for sure.”

Pimentel was a passenger as Win Win Win opened his sophomore campaign with a 7 ¼-length romp in the Pasco, breaking the Tampa Bay Downs main track record for seven furlongs (1:20.89) in the process.

“He always showed a lot. The first question was if he could go long, and he showed that he’s capable of doing that. Sometimes he breaks a little slow but when he gets going he can make a big run,” Pimentel said. “That day he broke slow and he was trailing the field, and when I asked him to go he just took off and pretty much did it on his own. I never hit him or anything. It was very impressive.”

Ortiz replaced Pimentel for Win Win Win’s next start in the March 9 Tampa Bay Derby (G3), where he closed to be third by 2 ½ lengths behind Tacitus. He made an even more impressive late run from far back to be second to Vekoma in the April 6 Blue Grass (G2); he will face both winners in the Derby.

Pimentel, who rode at Laurel both days, watched each race with interest.

“He ran good both times. He didn’t get away very good, but that’s just the way he is. Hopefully in the Derby, he gets away better,” he said. “Other than that, he ran good and he finished up very good. He didn’t have much racing luck in the last race at Keeneland but he was running at the end. He showed that he was a really good horse after he got in a little trouble to come back and get up for second.”

Trombetta and Pimentel have enjoyed success together over the years, leaving both the trainer and Live Oak’s Charlotte Weber confident and happy to have him back on board.

“When things changed, the owner was adamant. She didn’t waffle. She said, ‘Call him up and get him back on the horse.’ I think it’s a great decision,” Trombetta said. “He’s earned it. He deserves it. I’m very comfortable with it. He gets along with the horse really well. He’s had four tries and he’s had three wins and a second to what God only knows could be a really nice horse, so he’s done nothing but earn the chance to do it.”

It is a chance that Pimentel always dreamed would come. He has ridden in two previous Triple Crown races, both coming on familiar ground in the Preakness, where he ran 11th with Norman Asbjornson in 2011 and eighth on Kid Cruz in 2014.

“Honestly, you always hope and you always wish that you can ride in those kinds of races, but it’s not easy. Mike and I have always had good luck together,” Pimentel said. “It’s a great experience to have an opportunity to ride in the Kentucky Derby, but it makes it more special because Mike and I have a long history together.”

Pimentel has received great support from fellow riders, horsemen and fans in Maryland, all excited to see him on the big stage. Represented by agent Ronnie Gerardo, Pimentel began his career as an exercise rider for Hall of Fame trainer Bill Mott and had a successful run on the New Jersey circuit before landing in Maryland in the summer of 2006.

“Everybody’s excited for me. I got a lot of compliments and congratulations so everybody’s happy, I think,” he said. “It means a lot. It means everything. We always dream to be in these kinds of races, and the Derby is the top race so it’s very exciting.”

Pimentel said he would consult with his friend, retired Hall of Fame jockey Ramon Dominguez, about riding in the Derby. Laurel’s Sheldon Russell, who rode Done Talking in the 2012 Derby, has also offered his advice.

Twenty-seven jockeys have won the Derby with their first mount, the most recent being Mario Gutierrez in 2012 with I’ll Have Another. Pimentel was a finalist for the 2001 Eclipse Award as champion apprentice when he set career highs in mounts (1,039), wins (145) and purse earnings ($4,387,978).

“He’s a very nice horse, very capable. I think he’s got a very good shot to be right there with them,” Pimentel said of Win Win Win. “I’m just very happy, very excited about it. I can’t wait, to be honest.”