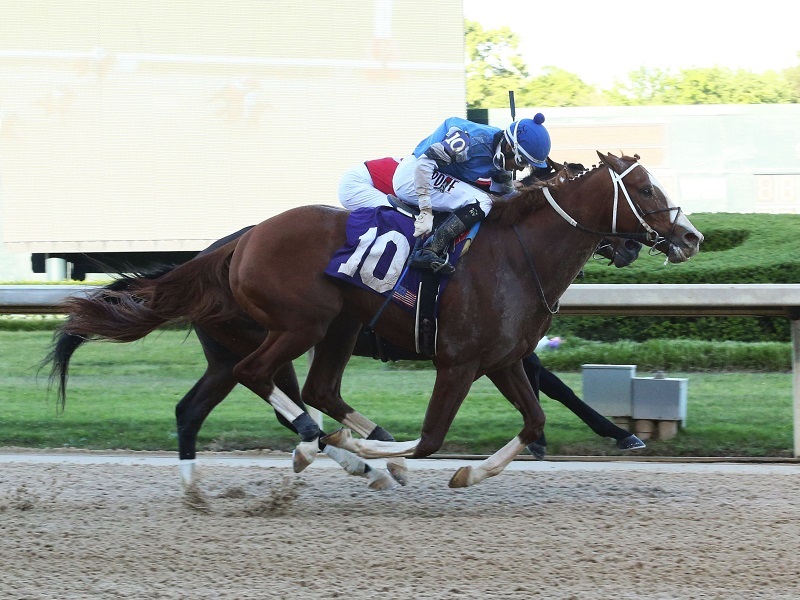 BALTIMORE – While a final decision won’t come for at least a few days, if all goes well Alex and JoAnn Lieblong’s Laughing Fox is likely headed to the 144th Preakness Stakes (G1) Saturday, May 18 at legendary Pimlico Race Course.

Laughing Fox, trained by Hall of Famer Steve Asmussen, earned an automatic berth into the Middle Jewel of the Triple Crown by virtue of his neck victory over Night Ops in the 1 1/8-mile Oaklawn Invitational Saturday at Oaklawn Park.

Alex Lieblong said early Sunday afternoon that Laughing Fox came out of his first career stakes victory in good order and the Preakness will be up to the chestnut son of 2012 Belmont Stakes (G1) winner Union Rags. He remains at Oaklawn with assistant trainer Darren Fleming but will soon join Asmussen’s string in Kentucky.

“So far, so good; I’ll put it that way,” Lieblong said. “First of all, we’re very, very honored that we’ve got the choice. I think it’s a neat thing that Oaklawn and Pimlico worked out. We’re kind of just going to let the horse tell us. If at all possible, we’ll probably do it but we’re going to make sure that the horse wants to do it, so to speak.”

Laughing Fox ran fourth in the Arkansas Derby (G1) April 13, a length behind third-place finisher Country House. On Saturday, Country House was elevated to victory in the Kentucky Derby (G1) following the disqualification of winner Maximum Security for interference.

“We have to make sure that he keeps giving all the right signals [and] if Steve and Darren agree that that’s what he’s telling them,” Lieblong said. “I imagine it’s like a lot of guys coming out of the Derby, they’ve got to kind of just watch and see how their horse is acting the next two or three days. That was quite a bumper-car race there. We didn’t have the bumper car but we had to fight the speed bias.”

Lieblong, a central Arkansas native who heads his own Little Rock-based investment firm but also has bank, gas and oil holdings, got reports from both Asmussen and Fleming Sunday morning.

“I talked to both of them, got a video of the horse jogging on the pavement and he looked good. Now the question over the next few days is does he look like he has the energy and the weight?” Lieblong said. “Looking back from the Arkansas Derby to this last race, in my opinion he might have put on a pound of two, so that’s good.”

In recent years, horses that raced in Arkansas and went on to win the Preakness include Hall of Famers Curlin and Rachel Alexandra, 2015 Triple Crown champion American Pharoah, and Smarty Jones, Afleet Alex, Lookin At Lucky and Oxbow.

The Lieblongs owned Marathon Lady, a 12-1 long shot who came up a neck short of Bob Baffert-trained winner Fiftyshadesofhay in the 2013 Black-Eyed Susan (G3), held Preakness eve at Pimlico. The 95th edition of the prestigious event for 3-year-old fillies will be run Friday, May 17.

“One thing that we all enjoyed was what a great event it was and that everybody was so nice to everybody. That part we would look forward to coming back to,” Lieblong said. “Steve Hobby was training that one. He said, ‘Man, that place is so nice and friendly.’ He had been there three or four days when we got there. That’s awfully nice to hear.”