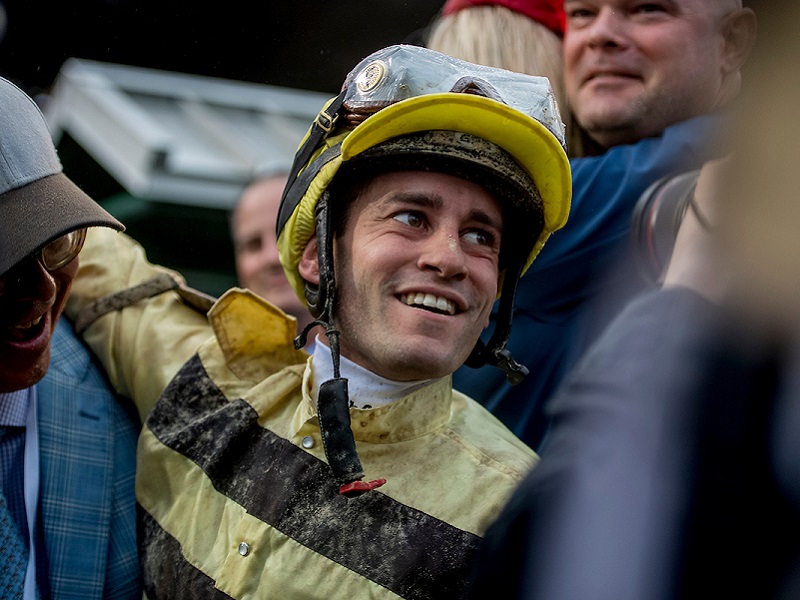 Flavien Prat, rider of Country House (1st) –“The race was great. He broke well and put me in the right spot. He was cruising the whole way. I was closer than I thought I would be and then when we hit the final turn, he was just dragging me. I moved him out and made a nice move at the quarter pole. Then, that horse just drifted out, kind of turned me sideways, and there were two horses inside of us. After that, I straightened up, he made a good move and that was it.”

John Velazquez, rider of Code of Honor (2nd) – “My horse ran great. The rail opened up great for me. It was like ‘Open Sesame.’ I was like “Wow, this never happens.” I thought I was going to win it. He ran like a green horse down the stretch. He was definitely affected by what was happening to his outside.”

Jose Ortiz, rider of Tacitus (3rd) – “My horse ran a huge race. We were a little unlucky since the pace didn’t collapse. Those were good horses in the lead. Country House ran a huge race, too. My horse was digging in late. I had no excuse. In the Belmont, he will be much better running 1 1/2 miles.”

Irad Ortiz Jr., rider of Improbable (4th) – “My horse didn’t really like the track. I asked him to keep up and he just could not.”

Joel Rosario, rider of Game Winner (5th) – “I thought he was going to be sharper at the gate. He broke OK but he stayed there for a little bit. I tried to push him a little early. I thought I was going to be OK because they were going fast at the beginning but he struggled the last three furlongs. He also had a little trouble with the track.”

Julien Leparoux, rider of Master Fencer (JPN) (6th) – “I very much appreciate the connections of this horse for allowing me the opportunity to ride in the Derby.”

Tyler Gaffalione, rider of War of Will (7th) – “I really thought I was going to win the Derby. I checked pretty hard when the seven (Maximum Security) came out as far as he did.”

Ricardo Santana Jr., rider of Plus Que Parfait (8th) – “I thought my horse ran a solid effort. He may not have liked the surface.”

Julian Pimentel, rider of Win Win Win (9th) – “We broke very well from the gate. I was in a great position but I don’t think my horse handled the sloppy track. He tried to make progress but he was spinning over the ground.”

Mike Smith, rider of Cutting Humor (10th) – “He ran good. He’s a nice horse but he is still learning out there.”

Gabriel Saez, rider of By My Standards (11th) –

Chris Landeros, rider of Bodexpress (13th) – “I was able to get into a good spot after breaking that far wide. We were in a good spot in the far turn but I had to check pretty hard after the seven (Maximum Security) came out.”

Junior Alvarado, rider of Tax (14th) – “My horse was bothered by the splash in his face. He was not happy about that. He kept trying but he was focused on the mud being kicked in his face.”

Florent Geroux, rider of Roadster (15th) – “I am disappointed to be honest. He broke all right but never traveled down the stretch the first time. He started picking up horses down the backside, but when I hit the half- mile pole, I was just out of horse. I am not sure if he didn’t like the track but it felt like he never ran.”

Jon Court, rider of Long Range Toddy (16th) – “Well, at least I am still the oldest rider ever to ride in the Derby. It was a lot of fun but I had to stop very abruptly.”

Luis Saez, rider of Maximum Security (1st, DQ’d to 17th) – “I thought I never put anybody in danger. My horse shied away from the noise of the crowd and may have ducked out a little."

Manny Franco, rider of Spinoff (18th) – “I didn’t think my horse handled the track very well. He felt uncomfortable. From the half-mile pole, I started to ask him for run but he was struggling.”

Drayden Van Dyke, rider of Gray Magician (19th) – “I had a beautiful trip; no trouble whatsoever. He seemed to handle the track well but I just ran out of horse. We’ll come back and fight another day.”