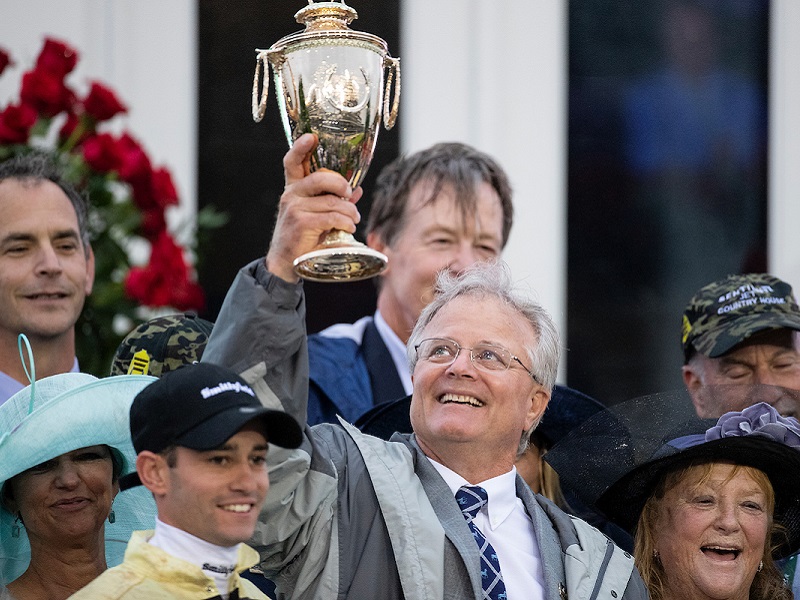 Bill Mott, trainer of Country House (1st) and Tacitus (3rd) – Pre DQ: “If it were a maiden 10 claimer, he would come down. I wish they would have left the track sealed because they get more kickback when they leave it like this, but he handled the track really well in Arkansas. You’re supposed to keep a straight line when you’re riding and there shouldn’t be a difference between a maiden 10k and the Kentucky Derby. It’s not supposed to matter between the two. I’m just waiting to see what the stewards decide. There was definitely a foul in the race. My horses didn’t get bothered terribly. Country House got bumped just a little bit, but there were a couple jocks who almost went down in there. I know what I naturally would like to happen, but I have no control over it at this point. There’s over 100,000 people here and they don’t want to make that call, but it’s their duty to do the right thing and I hope they do. I was second and fourth (past the finish) and I’m proud of my horses. I think they’re fair and I think they want to be fair, but there were a couple horses who nearly went down in the race and I think those horses, it eliminated all chance for them. It looked like he bore out at the 5/16ths and he forced some horses to come together. There were a couple jocks who had to stand straight up at a very critical time in the race. I can’t say that he bothered my horse that badly and I’m not going to moan about that. It’s really between the horses that he bothered and the winner. My horses ran well. I’m pleased. It took Tacitus a little while to get on track but he came flying at the end.”

Post DQ: “I think the horse ran great. I was pleased with the position he had and the way Flavien (Prat) rode him. The horse responded for him. (As far as the disqualification), it’s bittersweet and I’d be lying if I said It was any different. You say you always want to win with a clean trip and everyone recognize the horse as the as the great athlete he is and due to the DQ some of that is diminished. Two horses lost all chance to win a Kentucky Derby and they were in a position at the time to hit the board. People bet on these horses and millions are bet on these races. I know the stewards had a very difficult decision. With that being said, I’m damn glad they put our number up.”

Shug McGaughey, trainer of Code of Honor (2nd) – “He ran a good race. He just cut the corner and it looked like we were going to be home free. But I think he got to looking at the crowd a little bit, according to John (Velazquez). Then the horses ran away from him again, and he was finished. But he ran a good race. We’ll get him back and see what’s happening to him, and go from there.”

Bob Baffert, trainer of Improbable (4th), Game Winner (5th) and Roadster (15th) – “I told them that was the horse to beat (Maximum Security). I told him be thankful you didn’t lose him for $16,000 or else you’d be throwing up all over you horse right now. The field never got separated they were all right there. It was like a kids’ soccer game, they were all right there. I knew the first quarter of a mile I knew I was toast. The problem is (Improbable) couldn’t get out, the six (Vekoma) wouldn’t let him out. He could not get out. I told my riders to stay clean, they don’t listen to me. “

Koichi Tsunoda, trainer of Master Fencer (6th) – “He didn’t break that well, but we knew he’d break slowly. He made a huge effort in the stretch. I’m really pleased with how we finished so close to the other quality horses in the race. Great effort by horse and rider. If he comes out of this well, I want to take him to the Belmont (Stakes) next.”

Mark Casse, trainer of War of Will (7th) – “Yeah, we got bothered too. We almost clipped heels with (Maximum Security). We got excited. The horse ducked out and that’s when we nearly clipped heels. Tyler (Gaffalione) said he felt great. He said if he could have gotten him to relax a little he thought he would finish a little better. I have to talk to Gary (Barber) about (the Preakness) but maybe.”

Brendan Walsh, trainer of Plus Que Parfait (8th) – “I’m thrilled with him. I thought he ran his heart out. I couldn’t ask for anything more. He ran his race. He had as good a trip as you’re probably going to get. He’s not beaten very far at all and went all the way to Dubai and came back and ran his race. For a second thought it could maybe happen and he gave me a thrill. He showed he could run with these horses. He was no 54-1 shot.”

Mike Trombetta, trainer of Win Win Win (9th) – “No real excuses. The rider said he seemed to struggle with the kickback and climbing a little bit. But other than that, he had an OK trip. Today wasn’t his day.”

Todd Pletcher, trainer of Cutting Humor (10th), Spinoff (18th) – “We got the trips we wanted to get with them. Spinoff was forwardly placed and Cutting Humor was following behind him. Spinoff just hated the track, though. He didn’t really want any part of it. I had a hint about that earlier in the week when he galloped on the ‘off’ and showed us he didn’t care for it. When Manny (Franco) went to riding him today, he just backed right out of there. Cutting Humor had a good trip and closed some ground late. He didn’t disgrace us. Both colts seemed to come back fine. We’ll be back another day.”

Bret Calhoun, trainer of By My Standards (11th) – “We lost all chances at the break. The outside horse came back on us pretty hard. I think he came out of it OK. I’m not sure what’s next for him. We’ll take a few days to look at what we want to do.”

“Maybe Mr. Money (winner, Pat Day Mile – GIII) will be the one going to the Preakness. We’ll just take a step back and see what we want to do.”

George Weaver, trainer of Vekoma (12th) – “At least he came back in one piece. He might have gotten into a little trouble on the turn, but he was starting to back up anyway at that point. I don’t know if he liked the track. It’s a crazy day. He’s a great colt and we’ll get him back over here when he’s right.”

Gustavo Delgado, trainer of Bodexpress (13th) – Had no comment

Danny Gargan, trainer of Tax (14th) – Had no comment

Steve Asmussen, trainer of Long Range Toddy (16th) – “it was very unfortunate that it rained. He doesn’t do well on an ‘off’ track. But he was in a good position and then, as we know, the race got real rough.”

Jason Servis, trainer of Maximum Security (1s, DQ’d to 17th) – "I don't think it changed the outcome of the race. It looks like something scared him in the infield, but I haven't been able to watch it that close.

"It's [the disqualification}is tough. It hasn't sunk in yet, but it will."

"I saw 22 [seconds] and I was concerned and 46. I thought it was too fast, but he threw his ears up, I thought he was getting a breather and he'd be OK. He did seem to duck out a little, but when he [jockey Luis Saez] set him down, he was impressive.”

Peter Miller, trainer of Gray Magician (19th) – “The horse bled a two out of five and we are going to give him a little break and bring him back in 30 or 45 days.”