Improbable Spirited in Return to Track on Thursday, May 9 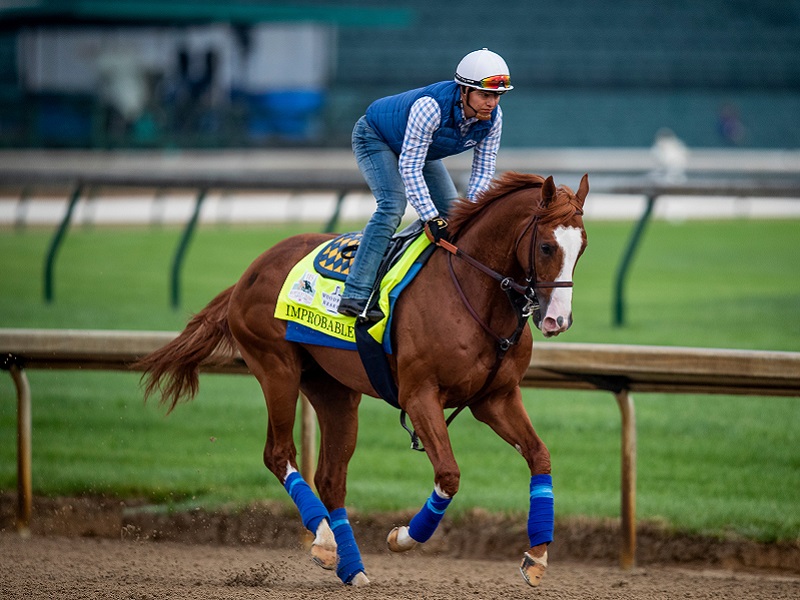 BALTIMORE, MD - Improbable, the likely favorite for the 144th Preakness Stakes (G1) at Pimlico, resumed training Thursday morning at Churchill Downs following his fifth-place finish in the Kentucky Derby (G1), in which he was moved up to fourth upon the disqualification of first-place finisher Maximum Security.

Accompanied by assistant trainer Jimmy Barnes on a pony, Improbable jogged a spirited lap around the track under exercise rider Humberto Gomez. Watching from the rail was Elliott Walden, president and CEO of WinStar Farm, which co-owns the son of City Zip with China Horse Club International and Starlight Racing.

“We jogged today, and it was difficult keeping him on the ground,” Barnes said with a laugh. “He was wanting to buck and jump, feeling very good, and we’ll proceed with training tomorrow. It looked after the race that he came out in good shape, very happy. So all systems are good right now.”

Trainer Bob Baffert, who saddled American Pharoah (2015) and Justify (2018) for Triple Crown sweeps, is shooting for his record-breaking eighth Preakness win, all since 1997. Baffert currently shares the record set in the 19th century by Robert Wyndham Walden.

Baffert is expected to return to Louisville from his California base this weekend and will determine whether he wants to give Improbable a timed workout before shipping to Baltimore.

Improbable went 3-for-3 during a 2-year-old campaign that was capped by a victory in the Los Alamitos Futurity (G1) by five lengths. He’s 0-for-3 this year, including a neck defeat in a division of Oaklawn Park’s Rebel Stakes (G2) won by Long Range Toddy and then by a length to Omaha Beach in the Arkansas Derby (G1).

Mike Smith, who won the Triple Crown with Baffert and Justify last year, picks up the mount for the Preakness. Improbable was previously ridden by Irad Ortiz Jr. in the Kentucky Derby, Jose Ortiz in the Arkansas Derby and Drayden Van Dyke in his first four starts.

“It’s not the same as his 2-year-old season; we’d rather be winning,” Walden said. “But he’s been close enough in all his races and he’s run against Omaha Beach, who would be the pro tem leader right now, I’d think, or one of them. So he’s run very well.”

Improbable, who broke from Post 5 in the Kentucky Derby, was eighth in the early going while racing in striking distance of front-running Maximum Security.

“I would have liked to have been closer,” Barnes said when asked to evaluate Improbable’s Derby. “I really didn’t want to be back behind horses. He got beat 3 1/2 lengths in a roughly run race on a terrible, muddy racetrack. I would have liked to have been a little closer in the clear instead of trapped behind horses. But that’s the Derby. It’s a large field. You don’t always get the trip you want. So we move on to Baltimore.”

Walden said Thursday morning was the first time he’d seen Improbable since the Derby. “With the Derby, you want to see how their weight is, how they come out of it energy-wise,” he said. “He looks great.”

He said Baffert’s Preakness record gives him that much more confidence in running Improbable in the Middle Jewel of the Triple Crown.

“Obviously, he had three horses in the Derby, and he’s not choosing to run all three back,” Walden said. “He’s choosing Improbable because he thinks he’s the one who came out of the race best. So that does give you confidence.”

WinStar won its first Preakness as an owner last year with Justify, although the farm did purchase the breeding rights for Exaggerator before his triumph in the race in 2016.

“The Preakness is a stand-alone Grade 1 classic race,” Walden said. “It is very important in regards to the 3-year-old picture. Quite honestly, one way I looked at it was that if he could win the Preakness and do it well, I think it puts him in position to see how the rest of the year goes for 3-year-old champion. Because the Derby was just kind of a muddled race. Maximum Security is obviously a very, very talented horse, and Country House is coming on well. But I think the 3-year-old picture is wide open.

“I’m excited to go up there with Improbable and see if he can redeem himself. He ran well in the Derby, looked like he got bogged down a little bit the last quarter of a mile when Irad tipped him out. I’m not sure that was the best part of the racetrack. It seemed like horses down inside were running very well and it looked like he bogged down a little bit when he got out and got clear. I thought he was going to win at the quarter pole, because he was traveling well. Then he tipped out and he just didn’t look like he had the same stride he’s had in the past. That’s one of his weapons, his stride. Hopefully, we’ll catch a good racetrack and see. He ran well in the mud in Arkansas, so I wouldn’t be afraid of that, either. But the other day he just didn’t seem to have that same stride that he had in his other races.”