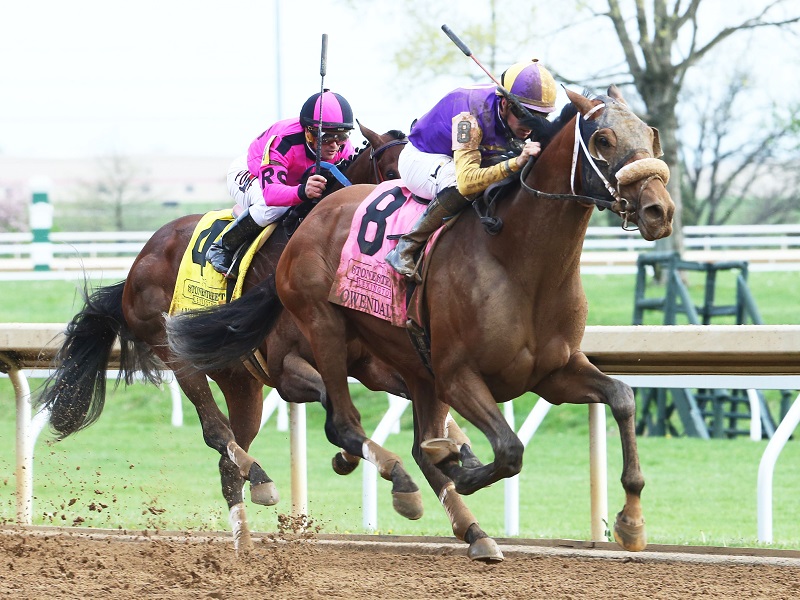 BALTIMORE, MD - Trainer Brad Cox not only will have his first career entrant in a Triple Crown race in the 144th Preakness Stakes but also his second. Both horses, Rupp Racing’s Owendale and Ten Strike Racing and Madaket Stables LLC’s Warrior’s Charge, were on display in the pre-dawn Saturday morning at Churchill Downs while producing strong workouts.

Owendale went first, right after the track opened at 5:30 a.m., and was timed by the Churchill Downs’ clockers going five-eighths of a mile in 59.20 seconds, the fastest of 31 works at the distance. The Lexington Stakes (G3) winner was clocked galloping out three-quarters of a mile in 1:12.20 after going through splits of 12.40 for the first eighth-mile, 24 for the quarter-mile and 46.80 for the half-mile under exercise rider Mario Garcia.

“He went really well and did it the right way, breaking off at the half and going on out through the three-quarter pole,” Cox said. “The rider stayed down on him around the far turn, no strong urging or anything, just what we were looking for. Came back and scoped great and looked good cooling out. We’ll check them tomorrow, and if all is well, on to Baltimore.”

Warrior’s Charge began his work minutes later, breezing five-eighths in 1:00.80 through fractions of 12.60, 24.60 and 48.60 before galloping out six furlongs in 1:13.20 under regular exercise rider Edvin Hernandez. The clockers went on and caught a seven-furlong gallop-out time of 1:27.40.

“The other colt was a little headstrong going to the pole, and I think it took him around a sixteenth of a mile to settle into the work,” Cox said of Warrior’s Charge. “But a really good breeze. Both of them worked fantastic. Both horses haven’t raced in five weeks, so I was looking to do something with them, and I feel we accomplished that this morning… Both of them were on their own, doing it the right way, on the bridle. I had a radio on both riders, instructing them just to stay down and as long as (the horse) felt good and let them do their thing. They did and felt there was some left in the tank for both of them.”

Owners Marshall Gramm and Clay Sanders of Ten Strike Racing and Madaket Racing’s Sol Kumin elected to supplement Warrior’s Charge into the Preakness off back-to-back impressive wins at 1 1/16 miles against maidens and allowance company at Oaklawn Park. The cost is $150,000 to make a horse eligible for the Preakness if it wasn’t first nominated to the Triple Crown.

“As far as a trainer, it wasn’t going to be anything different with what I did with the horse,” Cox said. “I was preparing him for the Sir Barton, and they brought this up. The bottom line is: He fits. We’re going to give him the opportunity. He’ll be forwardly placed, that’s what we’re hoping for. Javier Castellano will ride him. I think if he can get the right trip and back things down, be close – not necessarily on the lead, but if he is, that’s OK – and carry his speed a mile and three-sixteenths.”

Warrior’s Charge has never been in a stakes, let alone a Grade 1. So it speaks to his potential that the stable was able to land Castellano, a two-time Preakness winner and Hall of Fame jockey.

“His [speed] figures stack up with these horses,” Cox said. “That’s why we’re looking at this. He’s a very nice horse, tons of potential. We’re jumping into the deep end of the pool. But we do think there’s a lot of talent and potential there.

“I feel like Owendale is still figuring it out,” he added. “He’s definitely hitting his best stride midway through his 3-year-old year. It’s not just about next Saturday. It’s about going on and developing him as the year goes on.”

Last year Cox had his first Kentucky Oaks (G1) winner, first Breeders’ Cup winner and first champion with Monomoy Girl. Cox is optimistic about his chance to add a Triple Crown victory to his ever-expanding resume.

“It’s super, super exciting. Both horses are coming into this race extremely well. It’s going to be up to the trips they get and just how good are they? We don’t know,” Cox said. “That’s why we’re jumping into the deep end of the pool, and hopefully they can swim.”