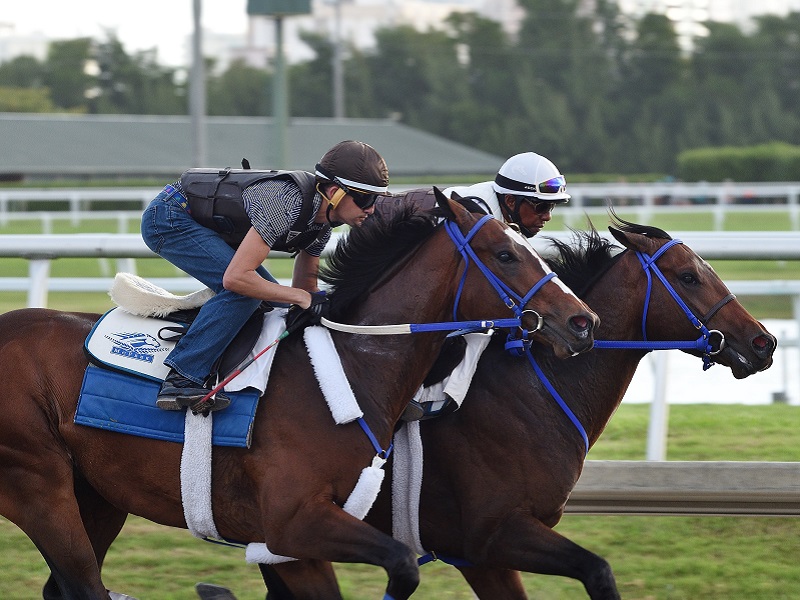 BALTIMORE, MD - Although Churchill Downs’ clockers timed Signalman’s workout as a half-mile breeze, the Preakness contender’s work Saturday morning was designed as a five-furlong move. With Signalman breezing just to the outside of stablemate Indian Counselor, the clockers caught the half-mile in 47.60 seconds with a five-eighths gallop-out time of 1:00.80.

“He hadn’t run in six weeks, so we needed a nice [work] in company,” said trainer Kenny McPeek. “He’s going to be running a mile and three-sixteenths with six weeks between races. It was a nice maintenance breeze. The other horse is a good, solid horse, too. He stalked off the side of him and finished up good. Nice work.”

Jockey Brian Hernandez Jr., who will ride Signalman next Saturday, observed the workout.

“He went along like we wanted him to and finished up well and went on and galloped out,” he said.

Hernandez has been on Signalman for his past five races: a second in Keeneland’s Breeders’ Futurity (G1), a third in the Breeders’ Cup Juvenile (G1), a victory in Churchill Downs’ Kentucky Jockey Club (G2), then starting this year with a seventh in Gulfstream Park’s Fountain of Youth (G2) and third in Keeneland’s Blue Grass (G2), in which he lost a chance to qualify for the Kentucky Derby field by missing second by a nose.

“He’s always been a big, good-looking horse, and it seems like he’s getting bigger and stronger,” Hernandez said. “Everything we’ve asked him to do so far, he’s done – between only having the two preps in the Fountain of Youth and Blue Grass. He’s getting better and better, it seems. We’re just looking at the Preakness and see what he can come up with.

“The Blue Grass was a good effort for having the one race going into it. I thought he ran a respectable race. He might have gotten a little tired late, just because it was only his second race of the year. He gave us an honest effort,” he added. “With all this horse has done so far up to this point, you have to go into the Preakness thinking he has a big chance.”

Asked about the prospective Preakness field, McPeek quipped, “I’m really happy that Pimlico doesn’t use the points system like Churchill Downs and I don’t have to worry about getting in. Eleven is a good number. It should be a great race. There are some good horses running. I think some of the horses that didn’t run in the Derby are going to run big in this one. Then, we’ll all probably get hooked up at Belmont, too. It’s ever-changing this time of year. You get horses that peak before the Derby, some during and some after. It’s part of the process and challenge of it all.”