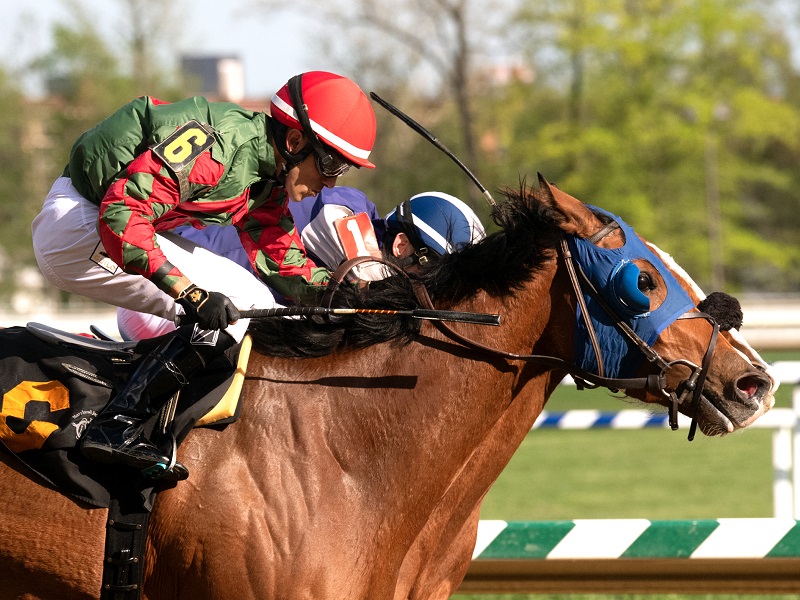 BALTIMORE, MD – Having established her local dominance with four straight wins, the last three in stakes, Maryland homebred Las Setas will face the biggest test of her young career when she faces a batch of new faces as she steps up to graded company in Friday’s $250,000 Xpressbet Black-Eyed Susan at Pimlico Race Course.

The 95th running of the 1 1/8-mile Black-Eyed Susan for 3-year-old fillies highlights a 14-race program that includes seven stakes, four graded, worth $1.15 million in purses on the eve of the 144th Preakness Stakes (G1), the Middle Jewel of the Triple Crown.

Trained by Katy Voss for fellow co-owners Robert Manfuso and Wayne Harrison, Las Setas is attempting to become the first Maryland-bred to win the Black-Eyed Susan since favored Calipha bested 12 rivals in 1994 for owner-breeder Mrs. James A. Bayard and Hall of Fame trainer Grover ‘Bud’ Delp.

“The water gets a lot deeper. It’s going to be a much tougher race. There are fillies in there that have run much better [speed figures] than she has, but we’ll see. She’s doing well. She hasn’t missed a beat since her last race,” Voss said. “Hopefully, she can move up a few points.”

Las Setas has done nothing wrong this year, stringing together four consecutive front-running victories by 12 ¼ lengths. She was a determined nose winner of her most recent start in the April 20 Weber City Miss at Laurel Park, earning her an automatic berth in the Black-Eyed Susan.

The Weber City Miss followed open-length triumphs in the Beyond the Wire and Wide Country, all over Our Super Freak, in a steady increase in distance from seven furlongs to about 1 1/16 miles last out, her first try around two turns.

Jevian Toledo, aboard for all five of her starts, rides back from far outside Post 9 at 120 pounds, four fewer than co-highweights Always Shopping and Cookie Dough.

“Toledo thought she might have gotten a little tired last time. We had a missed a bit of training after the previous race when I sent her to the farm, but she actually ran the same [speed] number in that race as she did in the Wide Country,” Voss said. “She actually ran a slower number in the Beyond the Wire. People think, ‘Well, she bounced in the Beyond the Wire.’ Actually, she was geared down because she didn’t have to run any faster.

“Knock on wood, she’s fine. She’s come out of each race good, and we hope that keeps going,” she added. “Looking at the numbers, Our Super Freak improved [in the Weber City Miss] rather than our filly going backward. It was her first start around two turns. She’s going to need to move forward a couple more points to be competitive in the Black-Eyed Susan.”

Las Setas, whose name is Spanish for mushrooms, has had two sharp works for the Black-Eyed Susan, going six furlongs in 1:11.60 May 10 in her most recent move. Prior to that, she went a half-mile in 48 seconds May 4, second-fastest of 56 horses at the distance.

“She’s a pretty easy-going filly as far as training. She’s nice to gallop. She doesn’t try to run off. She doesn’t do a lot of stupid stuff,” Voss said. “We always thought she was really nice, but things normally work out that well. You’re just trying to keep them sound and everything.

“She ran really green first time out. I think her first two races helped her,” she added. “She’s always shown an awful lot of talent. The other day when she worked in 48 flat, she just looked like she’s just kind of cruising along. She isn’t being asked. She picked it up on her own a little bit in the lane.”

Among the newcomers are a pair of fillies from four-time Black-Eyed Susan-winning trainer Todd Pletcher, Always Shopping and Off Topic. Repole Stable’s Always Shopping is unbeaten in two starts this year, both in 1 1/8-mile stakes at Aqueduct, the latter coming in the Gazelle (G2) in her graded debut. Manny Franco, up for both wins, gets the return call from Post 6.

“This seems like a natural progression for her,” Pletcher said. “She’s improved each spot, and two turns and 1 1/8 miles seems to suit her well. Everything has gone well for her since the Gazelle.”

Paul Pompa Jr.’s Off Topic will have Hall of Famer John Velazquez in the irons from Post 2. The daughter of Kentucky Derby (G1) winner Street Sense finished third, beaten two lengths by her stablemate in the Gazelle, her first try both in stakes and at the distance.

“I was pleased with her effort, but she’s one that is still putting all her potential together,” Pletcher said. “She broke better in the Gazelle than she had and put herself in a tractable position. She still has not run to her full potential.”

Cookie Dough and Point of Honor, two horses that didn’t get into the May 3 Kentucky Oaks (G1), will take their shot in the Black-Eyed Susan. Arindel’s Cookie Dough swept the final two legs of the Florida Sire Series for juvenile fillies last fall, but missed a planned start in the Breeders’ Cup due to illness. She returned March 2 to finish second in the Davona Dale (G2) and was third by 1 ¼ lengths after setting the pace in the Gulfstream Park Oaks (G2) March 30, both at Gulfstream Park.

Eclipse Thoroughbred Partners and Stetson Racing’s Point of Honor, a chestnut daughter of two-time Horse of the Year and Hall of Famer Curlin, broke her maiden at first asking in mid-December at Gulfstream, then came back with a 2 ¾-length triumph in the one-mile, 40-yard Suncoast Stakes Feb. 9 at Tampa Bay Downs.

In her most recent effort, Point of Honor was fourth in the Gulfstream Park Oaks, beaten less than a length by Cookie Dough and two lengths overall. Hall of Famer Javier Castellano will ride from Post 8.

“The track was playing like a conveyor belt that day and she seemed a little different than she was at Tampa … but she ran well,” Weaver said. “We were just in a holding pattern until we could get her a race. She breezed once at Churchill and breezed well and we breezed her a couple days ago at Belmont and she did well there, too, so all systems are go.

“She’s been doing great. We wouldn’t have gone to the Kentucky Oaks if we didn’t think she was doing real well, and when we didn’t get in the logical next step was to run in the Black-Eyed Susan,” he added. “It’s a prestigious race on the tour for 3-year-old fillies, and we’re happy to be a part of it.”

Jagger Inc.’s Our Super Freak will try again for owner-trainer Jamie Ness, who has won with seven of his first 11 starters at the current Preakness Meet at Pimlico which began May 2. Our Super Freak has run second or third in five straight races, all stakes, the last three behind Las Setas.

Our Super Freak was second to Congrats Gal in the Smart Halo Nov. 10 and third to Pimlico-based Please Flatter Me in the Gin Talking Dec. 29 – both winners are entered in the $150,000 Adena Springs Miss Preakness (G3) on the Black-Eyed Susan undercard.

“It would be a great race to win. It would be great for her value down the road, being a mother, and just for her,” Ness said. “I’ve been doing this a long time and I’ve realized a lot of things can happen so sometimes you’ve got to be in it to win it.

“She’s just been consistent, she keeps trying hard. She’s a grinder, and sometimes that’s all you need to catch a break,” he added. “She dances every dance and there’s no reason why she won’t this time either, unless the competition is too tough.”

Cheyenne Stables’ Ulele will be making her stakes debut in the Black-Eyed Susan for trainer Brad Cox. The Candy Ride filly has won two of three starts this year, and exits a gate-to-wire optional claiming allowance score April 4 at Keeneland over High Regard, who returned to win a similar spot in her subsequent start.

“This is good spacing between that race and the Black-Eyed Susan, and she’s trained extremely well at Churchill,” Cox said. “She deserves the opportunity to step up against these horses.”

Completing the field are OXO Equine’s Grade 1-placed Brill, a $1 million yearling of 2017 who was third in the 1 1/16-mile Fantasy (G3) last out April 12 at Oaklawn Park; and River Bend Farm’s Sweet Diane, third in the Fair Grounds Oaks (G2) March 23 and Suncoast Stakes, the latter behind Point of Honor.