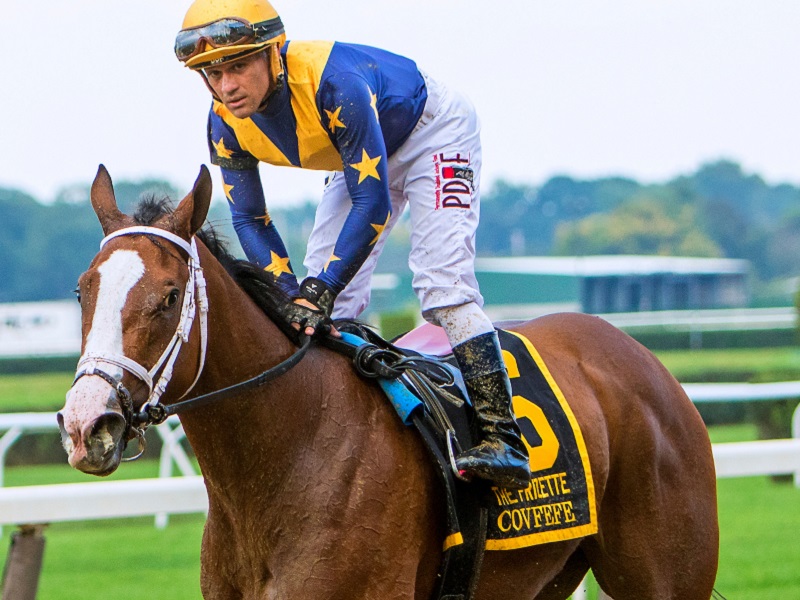 LNJ Foxwoods’ Covfefe is two-for-three, the only defeat a fourth-place finish last fall in Belmont Park’s Frizette (G1) at a mile won by champion 2-year-old filly Jaywalk. In her only start this year, Covfefe led all the way to take a 6 1/2-furlong allowance race at Keeneland.

“Fast filly,” Cox said of the daughter of Into Mischief. “She was actually favored in the Frizette last year against Jaywalk. She came out of that race with a mild setback. We gave her the winter off, and she returned at Keeneland and ran extremely fast.

“She’s had plenty of time since that race. I think if she can put a race similar to that, she’s going to be competitive,” he added. “She’s got a big pedigree and hopefully we can get her some graded black type and hopefully a win. She’s got to move forward. She’s not very seasoned, has only run three times. But she’s training extremely well and we’ve always thought a lot of her.”

Three-year-old fillies from all over converge in the six-furlong Miss Preakness as trainers seek a graded sprint stakes that keeps their horses against their own age.

But, local horsemen figure to be thick in the fray. One of the horses to beat could be the Cal Lynch-trained Congrats Gal, who has yet to lose in Maryland, with three Laurel Park victories by a combined 27 1/2 lengths. In two other starts she was third in last summer’s Schuylerville (G3) at Saratoga and second in a 5 ½-furlong stakes at Delaware.

Michael Trombetta, who also has Win Win Win in the Preakness, will saddle the Maryland-bred Never Enough Time, who won her only two starts by more than five lengths each at Laurel.

“I realize that could be the deep end of the pool, but I’m backed into a corner,” he said. “I don’t have a lot of choices for her. She’s graduated very quickly. We’ve always liked her. We thought she was way above par. But to run in two races, and now all of a sudden there’s nowhere to go but there. She’s worked well, so we’ll give her a shot and see what she’s all about.”

Mark Reid-trained Pennsylvania-bred Please Flatter Me is stabled at Pimlico and won her first three starts with ease while sprinting, including stakes at Penn National and Laurel. In her last start, Please Flatter Me finished a close fourth in Aqueduct’s $250,00 Busher Stakes at a mile.

Bob Baffert, trainer of expected Preakness favorite Improbable, is bringing along 2-for-2 Fighting Mad, winner of a Churchill Downs allowance race on April 30. Like the disqualified Kentucky Derby (G1) winner Maximum Security, Fighting Mad is owned by Gary and Mary West and is by their 2013 Breeders’ Cup Juvenile (G1) winner New Year’s Day, who was sold as a stallion to Brazil this year.

The Louisiana-bred Midnight Fantasy ran out of sprint stakes in her birth state, with trainer Joe Sharp successfully shipping her to Mahoning Valley in northeastern Ohio for a five-length victory in a $75,000 stakes.

“She’s undefeated going three-quarters,” Sharp said. “We were kind of railroaded into some route races down in Louisiana, because that’s all they had for 3-year-old Louisiana-breds at the end of the meet, so we had to go two turns – obviously not her forte.

“We shipped her to Mahoning Valley. She went down there in 1:10 and change, which is flying over that track, and won going away,” he added. “It’s a little unorthodox way to get to Pimlico, but I think her numbers stack up. I’m confident in her, especially going three-quarters. She’s just really fast.”

Trainer Ron Moquett comes with Bye Bye J, an Arkansas-bred who won Oaklawn’s Rainbow Miss in her last start and who earlier this winter was a close second in Gulfstream Park’s Forward Gal (G2).

“We bought her after she ran in the Forward Gal,” said owner Alex Lieblong, who will have the Steve Asmussen-trained Laughing Fox in the Preakness. “She won and she was an Arkansas-bred, and she’s a gorgeous filly. It made sense to run in some stakes there in Arkansas and an allowance race there in Arkansas, so we kind of clipped a few coupons with her doing that. She’s a nice, nice filly and she’s gotten bigger and stronger.”