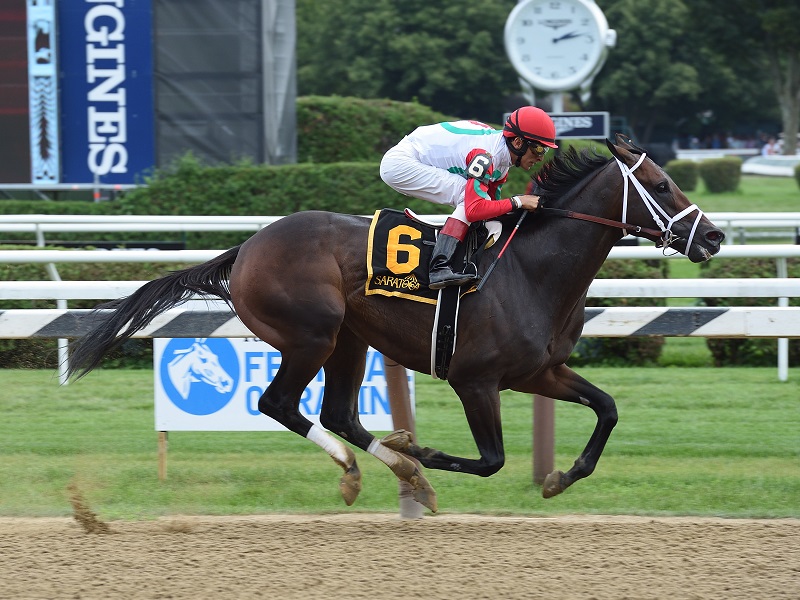 BALTIMORE, MD – The historic $300,000 Pimlico Special (G3), lengthened this year to 1 ¼ miles for the first time in history, drew the biggest field since its revival in 1988 as 14 were entered for Friday’s race at Pimlico Race Course.

Not since Blushing John beat 11 in the 1989 edition have more than 10 horses entered the Special, which had been contested at 1 3/16 miles ever since War Admiral won the first iteration in 1937. The next year, it was host to the match race between the Triple Crown winner and Seabiscuit, which Seabiscuit famously won.

Because of the configuration of the one-mile oval at Pimlico, 10-furlong races are a rarity. Indeed, the track record for the distance was set back in 1988 by Mazotti, who covered 1 ¼ miles in 2:01 4/5.

“I don’t think I’ve ever seen a 1 ¼-mile race at Pimlico,” said trainer Todd Pletcher, who took back-to-back editions of the Special with Revolutionary and Commissioner in 2014 and 2015 and has entered the duo of You’re to Blame and Rally Cry.

“Not every horse can get 1 ¼ miles,” he added. “You need to get a good run to establish a good position, and get into a comfortable rhythm. I think it plays to [my horses’] strengths.”

The Special will be the second start off a layoff for Rally Cry and You’re to Blame, stakes winners both. A 6-year-old son of Uncle Mo, Rally Cry enters off a fourth-place finish in the Charles Town Classic (G3). The Paul Pompa Jr. color-bearer was lightly campaigned in 2018, finishing fourth in both the Woodward (G1) and an optional claimer, having won his first stakes the previous year with an 8 3/4-length score in the Alydar at Saratoga Race Course.

You’re to Blame, owned by Bortolazzo Stable, kicked off his 5-year-old season with an optional claiming victory at Gulfstream Park on the heels of a successful year that included a victory in the 1 5/8-mile Greenwood Cup (G3), along with a second-place effort in the 1 ½-mile Temperence Hill at Belmont Park.

“Rally Cry has been impressive in the way he trains,” said Pletcher. “I think [his win in the 2017] Alydar was a breakout race for him. You’re to Blame has had success at the longer distances, and I think the extra distance on Friday will be a factor.”

Rally Cry drew post position 2 under Hall of Fame jockey John Velazquez, while You’re to Blame, with Jose Ortiz, will leave from post 13.

Tenfold, who delighted Hall of Fame trainer Steve Asmussen with his close-up, third-place finish behind Triple Crown winner Justify in last year’s Preakness, will be making his third start of 2019 in the Special. The son of Curlin was the beaten favorite in both his debut in March at the Fair Grounds, in which he was fourth, and in the Oaklawn Handicap (G2) in April.

Stronach Stable Inc. will be represented by homebred Unbridled Juan, who finished seventh in the Charles Town Classic at 22-1 in his 2019 debut.

“He came out of Saturday’s work [four furlongs in 48.60 seconds at Laurel Park] really good,” said Corrales of Unbridled Juan, who sports a career record of 7-9-9 from 30 starts. “This horse, he likes to finish second or third, but I hope he proves me wrong.”

Unbridled Juan will carry Alex Cintron when he leaves from post 9. Corrales also will saddle Bobby G, who has the services of Trevor McCarthy from post 10.

Trainer Mark Hennig, who won the 2005 Pimlico Special with Eddington, returns with Courtlandt Farms’ Carlino, making his first start as a 5-year-old. The gelded son of Lemon Drop Kid closed out his 2018 campaign making up considerable ground to finish fourth at odds of 69-1 in the Jockey Club Gold Cup (G1) at Belmont Park and is in search of his first stakes win.

“He was fourth …behind some pretty nice horses that day,” said Hennig. “Thunder Snow was in there and a couple others that are pretty solid horses. It was a good effort that day. He came out of that and had a little chip in a knee that we took out. Since he’s come back he’s been doing great.”

Rounding out the field, from the rail out, are veteran marathoner War Story, third in the Charles Town Classic last time out; Flying the Flag, making his stakes debut for last year’s winning trainer, Graham Motion; Heavy Roller, winner of three of four 2019 starts for trainer Joe Sharp; Laurel Park stalwart Cordmaker, stretching out past 1 1/8 miles for the first time; Just Whistle, most recently fourth in the Ben Ali (G3); Flameaway, sixth in the Ben Ali; Wait for It, winner of an allowance at Parx Racing; and Clubman, winner of three of his four 2019 starts including the Russell Road at Charles Town last time out.