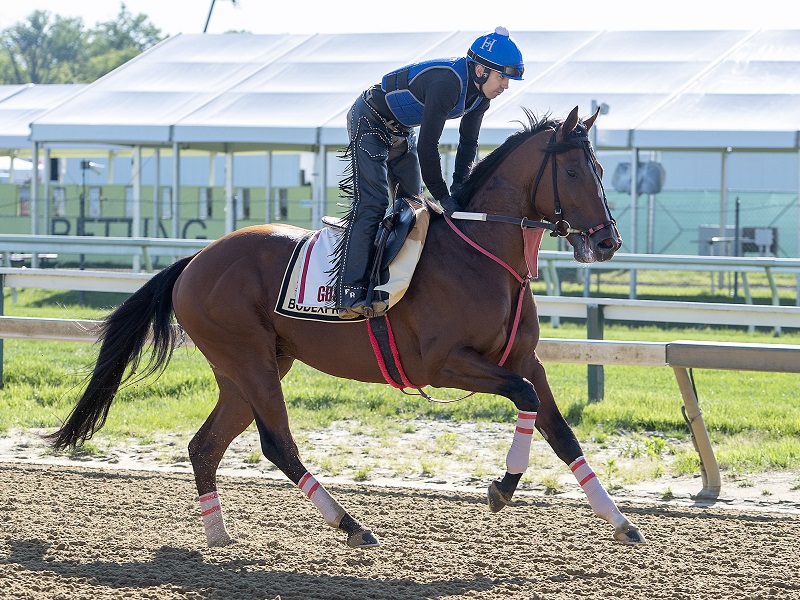 The Delgado-trained Bodexpress will go to post in search of his first career victory Saturday in a quest to become the first maiden to capture the Middle Jewel of the Triple Crown since Refund defeated three rivals in 1888.

Bodexpress finished second in three of his first five races, including a runner-up finish in the Florida Derby (G1) at Gulfstream behind Maximum Security, who went on to finish first in the May 4 Kentucky Derby (G1), only to be disqualified and placed 17th.

“I think in his [first] five races, he had bad luck. He came to win three times,” said Delgado, the all-time winningest trainer in his native Venezuela before venturing to South Florida five years ago.

In his race prior to his sharp showing in the Florida Derby, Bodexpress was bumped at the start and raced four wide before closing strongly to finish second, a neck behind the winner.

The son of Bodemeister, who was one of the horses that took the worst of things after Maximum Security drifted to the outside on the turn into the homestretch, finished 14th and was placed 13th in the Derby, in which he broke alertly from his far-outside post position and was forwardly placed before being taken up sharply on the turn entering the stretch..

“The race was very, very crazy. [Bodexpress] had bad luck,” Delgado said. “I think the horse ran a good race. Now, in the morning, he’s been very good. The rider said he’s happy, happy all the time.”

Bodexpress, who is owned by GDS Stable, Top Racing LLC and Global Thoroughbred, had a leisurely gallop at Pimlico Wednesday on the morning after arriving at Pimlico following a flight from Lexington, Ky.

Prior to Refund’s triumph by a length over an unnamed runner-up programmed as Bertha B. colt, five other maidens were victorious in the Preakness – Survivor (1873), Culpepper (1874), Shirley (1876), Cloverbrook (1877) and Saunterer (1881) – according to Allan Carter, historian at the National Museum of Racing and Hall of Fame. Laoban, the most recent maiden to run in the Preakness, finished sixth of 11 at 65-1 odds in 2016 and would go on to break his maiden in the Jim Dandy (G2) at Saratoga 2 ½ months later.