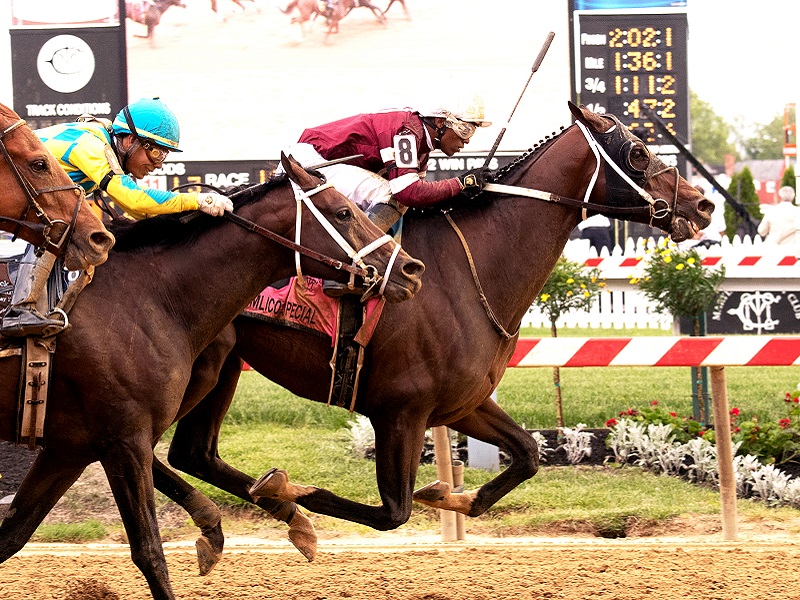 BALTIMORE – When last seen at Pimlico Race Course a year ago, Winchell Thoroughbreds’ Tenfold was closing with a flourish to finish a close-up third in the Preakness Stakes (G1) to eventual Triple Crown winner Justify.

Friday afternoon, the 4-year-old son of Curlin made a triumphant return to Baltimore, splitting rivals in upper stretch and holding off the late flourish from You’re to Blame to win the 49th running of the $300,000 Pimlico Special (G3) by a neck.

The Special, lengthened this year one-sixteenth of a mile to 1 ¼ miles, was one of seven stakes, four graded, worth $1.5 million on the Black-Eyed Susan day program.

The Steve Asmussen-trained Tenfold ($12.20) enjoyed a ground-saving trip under Ricardo Santana, Jr., settling toward the back of the pack as 30-1 long shot Flying the Flag led through an opening quarter-mile in 23.62 seconds, with the half going in 47.44 and three-quarters of a mile in 1:11.44.  As the field of 13 began to bunch up on the turn, Santana sent Tenfold through a narrow opening and the colt spurted into the lead, refusing to yield in the final strides to hit the wire in 2:02.36 over a fast main track.

“That’s the horse we expected,” said Santana in winning his first Special. “We always believed in him. He always tries hard.”

The Special was the first at the distance at Pimlico since May 27, 2000, a race won by the Eddie Gaudet-trained Big Bid.

It was the first win of the year in three starts for Tenfold, who finished fourth in an optional claimer at the Fair Grounds in March followed by a seventh-place finish as the favorite in the Oaklawn Handicap (G2). Overall, his record stands at 4-0-1 from 10 career starts, including one other graded stakes win in the Jim Dandy (G2) last year at Saratoga Race Course.

“It was a definite target because of how he ran in the Preakness last year,” said Asmussen, who previously won the Special in 2008 with Student Council. “This was exactly the outcome we were hoping for. The sky is the limit for him. I don’t think he’s really laid down his body yet. He’s a sound horse and everything in the pedigree gets better with age.”

Finishing a neck behind You’re to Blame in third was Cordmaker, who in turn was 1 ¾ lengths in front of Wait for It. Just Whistle checked in fifth, followed by Carlino, Clubman, Unbridled Juan, Rally Cary, Heavy Roller, Flying the Flag, Bobby G and Flameaway.

The Special’s rich past includes the iconic 1938 match race won by Seabiscuit over Triple Crown winner War Admiral. The stakes was discontinued after 1958 but revived in 1988 by late Maryland Jockey Club president Frank De Francis. The Special’s winners include Triple Crown champions Whirlaway, Citation and Assault and modern-day Horses of the Year Criminal Type, Cigar, Skip Away, Mineshaft and Invasor.

Steve Asmussen (Winning trainer, Tenfold): “Absolutely, it’s a very special win with a homebred for Winchell that came through [my] mom and dad’s program in Laredo. He just, he’s got it in him. He’s got it in him and you see him today.  Ricardo was talking about he’s got a lot of horse under him, but when he makes the lead, the addition of blinkers has kind of gotten him a little more serious in his training and hopefully this horse is going to have a huge rest of the year.”

“The sky is the limit for him. I don’t think he’s really laid his body down yet. He’s a sound horse and everything in the pedigree gets better with age.”

“This was a definite target because of how he ran in the Preakness last year. This was exactly the outcome we were hoping for.”

Ricardo Santana Jr. (Winning jockey, Tenfold): “That’s the horse we expected. We always believed in him. He always tries hard. He didn’t really like the track the other day [in the Oaklawn Handicap when seventh]. We always had confidence in him and today. I knew he was going to show what he had. He ran a really great race.

“At the three-eighths, I knew I had plenty of horse and I had to be patient and wait for the hole. When the hole opened and I asked him, he gave me a nice kick. I could feel the other horse coming on his side. The second he felt it, he kicked on. “

Todd Pletcher (Trainer, You’re to Blame, 2nd): “I thought he ran well, he had a pretty wide trip from that post. He didn’t break great. [Jockey] Jose [Ortiz] was able to get him a decent spot down the lane. The winner ran a good race.”

Jose Ortiz (Jockey, You’re to Blame, 2nd): “He broke a bit slow. I think it cost me the race. I wanted to be in the position Unbridled Juan was. If I was able to be where he was at I think I would have won the race. The slow break cost me a little bit, but that’s horse racing and I’m thankful he still ran a good race.”