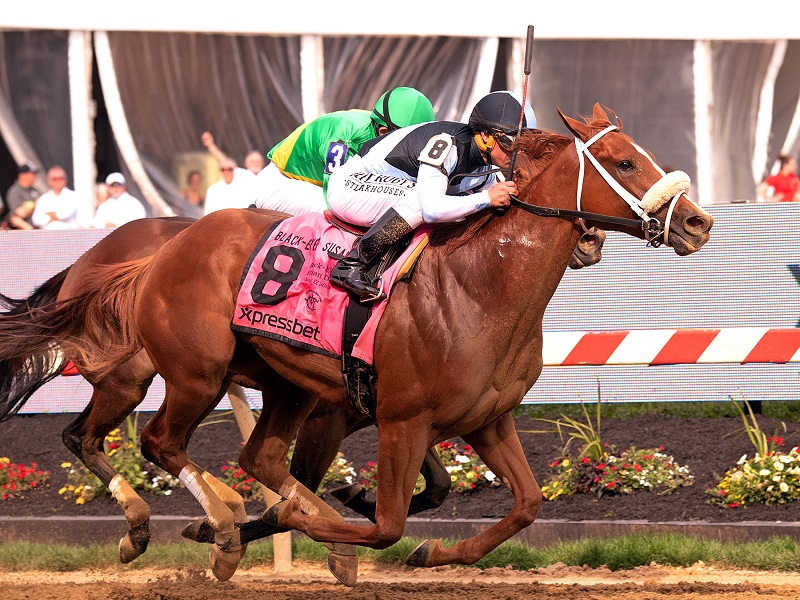 BALTIMORE – By the time the 95th edition of the $250,000 Black-Eyed Susan was set to run, Hall of Fame jockey Javier Castellano was already having a pretty good day. In just over a minute and a half, Point of Honor made it a great one.

Despite being hung wide around both turns from their outside post position, Castellano picked up his fifth victory of the afternoon and fourth in a stakes when Point of Honor charged down the center of the track and held off Ulele to her inside by a half-length in the $250,000 Xpressbet Black-Eyed Susan (G2).

The 1 1/8-mile stakes for 3-year-old fillies was the centerpiece of Friday’s spectacular 14-race program featuring seven stakes, four graded, worth $1.15 million in purses that served as a fitting prelude to Saturday’s 144th Preakness Stakes (G1), the Middle Jewel of the Triple Crown.

Eclipse Thoroughbred Partners and Stetson Racing’s Point of Honor ($7.80), excluded by points from the May 4 Kentucky Oaks (G1), completed the distance in 1:47.88 over a fast main track, narrowly missing the stakes record of 1:47.83 set by champion Silverbulletday in 1999.

Point of Honor, a narrow second choice at 5-2 in field of eight, gave Castellano his third career win in the Black-Eyed Susan, following Stopchargingmaria in 2014 and Keen Pauline in 2015.

Earlier Friday, Castellano in succession won the $100,000 Fidelity First & Blackwell Real Estate Skipat Stakes with Chalon, the $150,000 Adena Springs Miss Preakness (G3) with Covfefe and the $100,000 Maker’s Mark Hilltop with Dogtag. He started a string of four straight wins with Eons in Race 6.

“I’m so excited. Very happy. Everybody has been so supportive of me. I’m very blessed,” Castellano said. “With her post, it was difficult to cover up a little bit. I didn’t have the best trip in the first turn. I had to go a little bit wide, and in the second turn, too. But it worked out good because I was in the clear.”

Cookie Dough, like Point of Honor excluded from the Kentucky Oaks, broke sharply from the gate and went straight to the lead under jockey Irad Ortiz Jr., going a quarter-mile in 23.36 seconds and a half in 47.02, pressed to her outside by Grade 1-placed Brill with Ulele saving ground along the rail.

Cookie Dough ran six furlongs in 1:10.81 but saw her lead shrink to a half-length at the top of the stretch, and it wasn’t long before Ulele to her inside and Point of Honor on the outside came to challenge. Both horses worked their way past Cookie Dough in mid-stretch and Point of Honor kept finding more to outrun a determined Ulele to the wire for her second stakes win in four career starts, and first in graded company.

“We drew a little outside today and you lose ground being wide but I think she likes that kind of trip. Javier rode her as such,” Weaver said. “And she went back to where we were in the first place of wanting to go to the Kentucky Oaks and participate in some of these big races. She’s just very professional, very classy.”

Ulele was a decisive second, 2 ¼ lengths ahead of Cookie Dough. It was 4 ¼ lengths back to Brill in fourth, followed by Off Topic, favorite Always Shopping, Las Setas and Our Super Freak.

Las Setas, based at Laurel Park, saw her four-race win streak snapped. The winner of three straight stakes earned an automatic berth in the Black-Eyed Susan following her victory in the Weber City Miss April 20 at Laurel.

One of Pimlico’s oldest stakes races, the Black-Eyed Susan was first run in 1919 as the Pimlico Oaks. Its roster of winners includes Nellie Morse, the only filly ever to win the Preakness, and 10 that went on to be named 3-year-old champion female, most recently Royal Delta in 2011.

George Weaver (Winning trainer, Point of Honor): “She’s 3 for 4 now and we’ve always liked her. She graduated first time out and won a stakes next time out. The Gulfstream Park [Oaks] race was a little odd to us. She had some trouble in the first turn and got steadied and ate a little bit of dirt. She just didn’t seem quite as handy or responsive that day.  But the track was playing that day like a conveyor belt and it was carrying the front runners and it was a short run to the wire. So she didn’t really get into gear until inside the 16th-pole. We drew a little outside today and you lose ground being wide but I think she likes that kind of trip. Javier rode her as such. And she went back to where we were in the first place of wanting to go to the Kentucky Oaks and participate in some of these big races. She’s just very professional, very classy.”

Eclipse Thoroughbreds’ Aron Wellman (winning co-owner, Point of Honor): “We really believed in this filly and things didn’t quite go her way in the Gulfstream Park Oaks, which we thought would be enough to qualify her for the Kentucky Oaks. We were on the outside looking in and didn’t get in and here we are today.”

“She’s a filly that likes to be in a high cruising speed, be in a rhythm and we were okay with her being outside today. In the Gulfstream Oaks, she got a little squeezed and was in tight in between horses. But she’s a big filly with a long stride and we didn’t want to disrupt her rhythm. So when I saw 23 [seconds] and change and saw 47 and Javier had a good hold on her on the outside in the clear, I was pretty confident. Down the lane I thought she would put them away with more ease but Brad Cox’s filly [Ulele] put up a heck of a fight. She really made our filly run to the wire.”

Javier Castellano (Winning jockey, Point of Honor): “I was kind of rolled around last time at Gulfstream and tried to save ground and didn't have the best result.”

“Today, she placed perfect – eight horses. I lost a little ground but had a free trip. I didn't have to get bounced around with the horses. I didn't have to step aside. It worked out perfect. It was a perfect trip. Outside in the clear, she went by all the horses. That's what I was looking for today and we had the best result.”

Brad Cox (Trainer, Ulele, 2nd): “[Jockey] Joel [Rosario] gave her a perfect trip and she ran a great race. It was a tremendous race from her and she’s a tough filly. I thought she performed well.”

Joel Rosario (Jockey, Ulele, 2nd): “She gave me a good trip. I thought she was in a good spot. She did everything I asked her to do and responded when I asked her. Turning for home I thought we were going to get her [Point of Honor] but that horse came with a strong run at the end.”

Irad Ortiz Jr. (Jockey, Cookie Dough, 3rd): “I had a perfect trip. She got the lead but was beaten by two nice fillies. No excuses.”