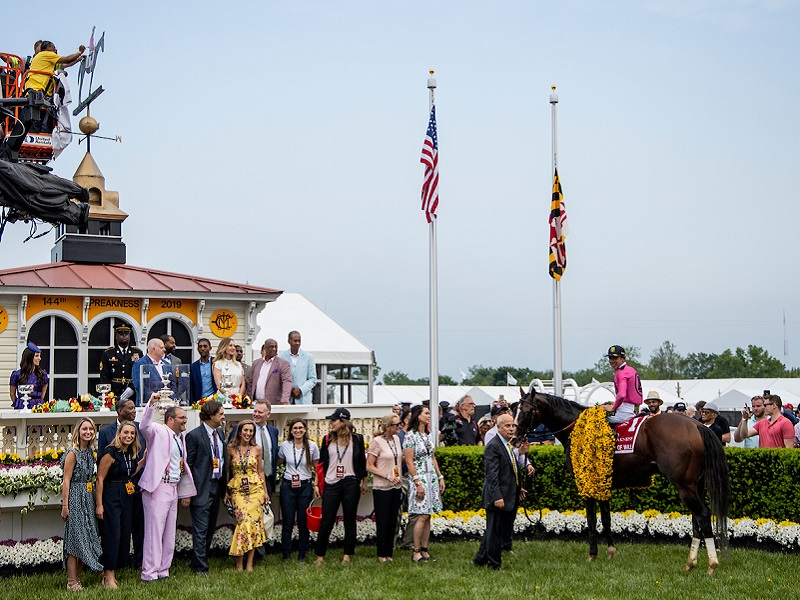 Post-race quotes from the jockeys and trainers who participated in the 2019 Preakness Stakes:

Mark Casse (Winning trainer, War of Will): “It was so important to win it. I just wanted him to get his chance to show everyone how good he is because he is a super horse. We thought we were going to win it two years ago [with Classic Empire] and we got beat at the wire so I kept trying to figure out where the wire was. It was exciting, just unbelievable.”

“It really hasn’t even hit me yet. I can’t even put it into words. I can’t thank my family enough for all the support. Of course my valet down in Florida, Jay Glass, and my agent, Matt Muzikar. Great team effort, I’m just so thankful.”

“He’s got so much heart. We always knew he had the ability, we just had to get a little bit lucky and today was our day.”

Dale Romans (Trainer, Everfast, 2nd): “Second in any classic is great. I thought the whole race he looked comfortable. When he wanted him to start picking up horses, he did. You could see he had the momentum. I thought we were going to win for a minute.”

Joel Rosario (Jockey, Everfast, 2nd): “We almost had it. He ran great. We have a great shot at the Belmont.

Brad Cox (Trainer, Owendale, 3rd ; Warrior’s Charge, 4th): “Very pleased with both of them. Warrior’s Charge fought incredibly hard. He’s a nice horse. I mean, :22, :46, 1:10 2/5 going a mile and three-sixteenths, he’s a good horse. We’ll give him plenty of time to recover. The other horse ran great. I need to watch a replay, but it looks like he maybe got stuck in behind some horses. He’s a big horse, probably needs to be more out in the open, clear running where he can keep his motor rolling. He took a little while to get going but ran a great race and I was very proud of both of them.”

Florent Geroux (Jockey, Owendale, 3rd): “I tried to save ground most of the time. I wish I could’ve saved a little more ground. It probably cost us a length or two at the end.”

Darren Fleming (Assistant to trainer Steve Asmussen, Laughing Fox, 5th): “I thought he ran well. He got a little farther back than I expected. He made up a ton of ground. But he showed he belonged.”

Ricardo Santana Jr. (Jockey, Laughing Fox, 5th): "He didn't handle the track very well at the start. He gave it a nice run in the end. I just wish he handled the track better at the start, but he showed he can run with these kind of horses. I was happy he finished strong.”

Bob Baffert (Trainer, Improbable, 6th): “When he did that in the gate I knew that was it. His only weakness is he gets a little bit fired up. He was acting pretty well but then he got fired up. When horses do that it takes a lot of energy out. Today wasn’t his day but the winner was pretty impressive.”

Mike Smith (Jockey, Improbable, 6th): “His usual tactics in the gate. He got upset, He was so brilliant going in. I thought he would be nice. Actually he broke well. I had a really good trip. Actually thought I was maybe going to get on with it at the 3/8ths pole and he just didn't keep on. I wish I could tell you more but that's it."

Michael Trombetta (Trainer, Win Win Win, 7th): “I thought he ran OK. We would have all loved to have done a little better but he was in it for a fight and I can’t get mad at him. He gave it a good effort.”

Julian Pimentel (Jockey, Win Win Win, 7th): “We were closer this time around. But in the second turn, I had to go wide. I thought he still ran well.”

Mark Hennig (Trainer, Bourbon War, 8th): “He looked like he was in the bridle early and I was really happy. When he went outside into the clear, he dropped the bridle and then picked it up again.”

Irad Ortiz Jr. (Jockey, Bourbon War, 8th): “No excuses. Had blinkers first time, and I tried to get him going but he's still learning."

Kenny McPeek (Trainer, Signalman, 9th): “There were eight horses faster than him. Brian rode him good. He said he put him in position. He was only about four or five off of them when he was in the middle of the turn, and they ran away from him. I don’t have a major excuse. I’m going to scope him. But right now we are planning on going to the Belmont.”

Brian Hernandez Jr. (Jockey, Signalman, 9th): ”We broke good but went wide around the first turn. We saved ground around the second turn and then he just evened out.”

Blaine Wright (Trainer, Anothertwistafate, 10th): “Hey [jockey Jose Ortiz] put him in the race and we were happy about that. He said the last eighth of a mile caught up to him. He said everything else went according to plan. We’ll get back to the barn and see how he is. I’m glad we came and had an opportunity. Obviously, I’m a little disappointed with the result, but we’ll regroup and go from there.”

Jose Ortiz (Jockey, Anothertwistafate, 10th): “I expected a good start. I think we were about third and stayed there. I gave him a breather on the backside and then tried to win the race. But we came up short today."

Kelly Rubley (Trainer, Alwaysmining, 11th): “He appears to be fine. We’re waiting to scope and we’ll evaluate him.  He appeared to stop and I don’t know what the reason for that is.”

Daniel Centeno (Jockey, Alwaysmining, 11th): “I thought he'd run better. He had a good trip and we tried to make a move around the turn but he just stopped.”

D. Wayne Lukas (Trainer, Market King, 12th): “I think my horse wants to run a mile. I don’t think he wants this distance. We need to find that out, though. He ran well for a mile. Some of them are adapted to a different distance and we found that out.”

Jon Court (Jockey, Market King, 12th): “He broke well, laid up in perfect position and then they started running away from him.”

Gustavo Delgado (Trainer, Bodexpress, DNF): “I don’t have the words to talk about that now.”

John Velazquez (Jockey, Bodexpress, DNF): (NBC Broadcast) “He was just not behaving good in the gate. He was not standing really well. He got me up against the wall in the gate. When the doors opened I was standing up right from the start and I kind of jumped sideways. I had my feet out of the irons and I lost my balance and I went off. I’m good, I’m good. It’s just disappointing when you come in here for a big race like this. Things like this happen with horses, but it’s disappointing.”