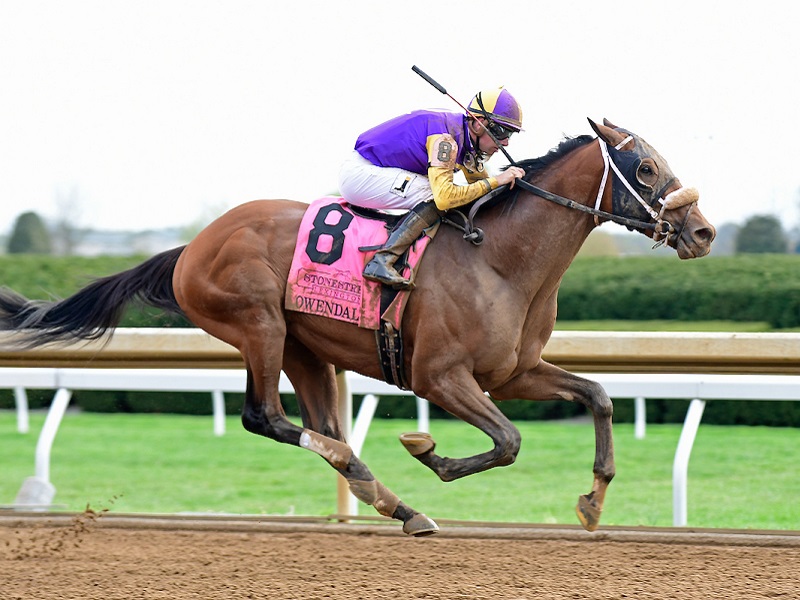 BALTIMORE - Calumet Farm’s Everfast, who made an impressive late run along the rail to finish second in Saturday’s Preakness, was headed back to trainer Dale Romans’ Churchill Downs stable Sunday morning.

The Belmont Stakes will be taken under serious consideration for the son of Take Charge Indy, Romans said after Everfast nosed out Owendale for second money Saturday.

Brad Cox, who finished third with Owendale and fourth with Warrior’s Charge in the trainer’s Triple Crown debut, said Owendale could possibly run in the Belmont Stakes. Owendale, winner of Keeneland’s Lexington (G3) in his prior start, put in a late wide rally to finish 1 ¼ lengths ahead of  Warrior’s Charge, who lost by a total of 2 ½ lengths after setting a strong pace.

Owendale and Warrior’s Charge were scheduled to van back to Churchill Downs on Sunday.

“They both cooled out fine, actually pretty quick too, considering to ask them to do something they’d never done before, going that far,” Cox said. “Warrior’s Charge, as fast as he went early, he looked great his morning. His energy is good. Same thing with Owendale.

“Warrior’s Charge, we wouldn’t even consider the Belmont with him, obviously,” he said. “The mile and a half is a touch far. Owendale, we’ll think about it. We’ll see how he’s moving. It would have a lot to do with who’s running, and, first of all, how he’s doing. It’s a lot back in three weeks. But it’s a big purse and it’s a prestigious race, and these horses only get one shot in their 3-year-old year.”

“I thought, ‘Warrior’s Charge is doing exactly what I thought: He’s going to take them a long way,’ and he continued on,” he said. “Then War of Will slipped up on the inside and I thought, ‘OK, he’s got the best of us,’ and I turned my attention to Owendale and thought for a second, ‘OK, he’s got a shot to get there.’ Then I saw the pink silks [of War of Will owner Gary Barber], and we weren’t moving quick enough the last part of it.

“But it was a big effort, just a nose away from being second,” he added. “I thought we lost more ground than the horse who ran second, so I was super-pleased with Owendale. Both of them. The horse on the lead ran an unbelievable race. He’s a really nice horse, probably just a little shorter races for him in the future.”

Cox said Warrior’s Charge’s owners, Ten Strike Racing and Madaket Stables, were glad to have supplemented the colt for $150,000 to the Preakness, even though fourth-place money of $99,000 left a shortfall.

“They didn’t break even, they didn’t get their money back,” he said. “But the horse showed them a lot. I think for them, everything was positive as far as performance. The effort yesterday didn’t surprise me at all. He gives you what he has. He’s very, very honest.”