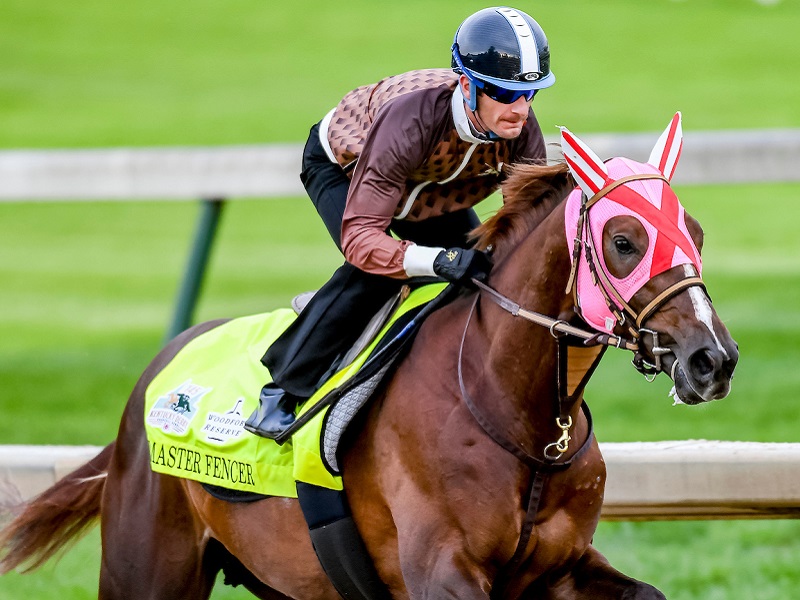 Master Fencer made the 6,600 mile journey from Japan to Kentucky to compete in the Grade 1 Kentucky Derby, where he rallied up the rail under Julien Leparoux to finish seventh, elevated to sixth following the disqualification of Maximum Security who crossed the wire first.

The talented Master Fencer will make his next start in the Grade 1, $1.5 million Belmont Stakes Bets on Saturday, June 8 at Belmont Park.

He arrived in New York late Friday evening from Keeneland in Lexington, Kentucky where he had trained following his Derby effort.

Master Fencer had a strong training session on Monday morning, starting with a jog on the dirt training track ahead of a gallop on the Belmont main track.

"Today, he was still fresh. I felt that his stride has changed in a good way and it has become longer. I'm very satisfied," said training assistant Yosuke Kono via translator Mitsuoki Numamoto.

Kono said that the chestnut colt has gained good weight and conditioning during his extended stay stateside, which allows for Master Fencer to train more vigorously ahead of the 1 1/2-mile Belmont.

"Because of the shipping from Japan to Churchill Downs, it took a while [to regain strength]. He lost some weight," continued Kono via translator. "Because of that, we are trying to keep his condition, and because of the days after the Derby up until now there is plenty of time. He eats fair now and we can give him more pressure compared to before the Derby."

A start in the Belmont Stakes will make Master Fencer eligible for NYRA's $1 million bonus offered to any Japan-based winner of New York's most prestigious race.

Introduced for the 2017 Triple Crown season, the entire $1 million bonus would be awarded to the winning Japanese horse's connections in addition to the $800,000 winner's share of the purse for the last and longest leg of the Triple Crown.

Leparoux retains the mount on Master Fencer for the 'Test of the Champion' and he will be at Belmont on Wednesday morning to guide the colt through a five-furlong breeze on Big Sandy.