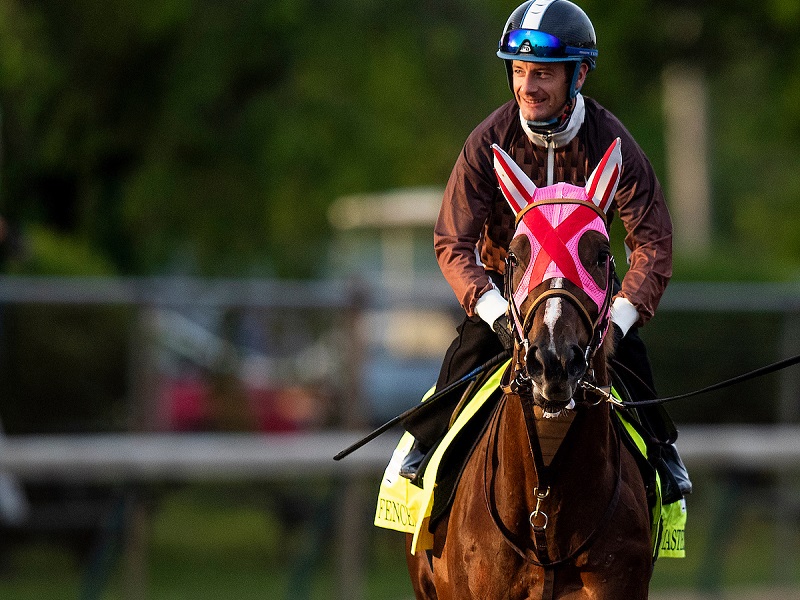 ELMONT, N.Y. - Katsumi Yoshizawa's homebred Master Fencer, an eye-catching sixth in the Kentucky Derby rallying up the rail under Julien Leparoux for trainer Koichi Tsunoda, will make his next start in the Grade 1, $1.5 million Belmont Stakes on Saturday, June 8 at Belmont Park.

The Japanese-bred son of Just a Way will arrive at Belmont Park on Friday evening from Keeneland Race Course in Lexington, Kentucky, where he has trained towards the 1 ½-mile 'Test of a Champion'.

"Master Fencer was the first Japanese bred to run in the Kentucky Derby and we are continuing on that path of firsts. I needed to see how he'd run in the Derby before making any plans for his immediate future, but I'd always felt like the Belmont Stakes would be the logical next step for him if he proved himself worthy in the Derby first," said Yoshizawa. "Ultimately, he performed better than we could have hoped, so I gave the trainer and staff the go ahead to prepare for the Belmont. I think he will have a better chance in the Belmont than he did in the Derby. I think America's dirt racing is the best in the world, so I know winning won't be easy but I hope he has a chance to run his race and come home safe and sound."

Out of the Deputy Minister dam Sexy Zamurai, Master Fencer graduated on December 23 at Hanshin and followed up with an allowance score on January 14 at Kyoto.

Master Fencer earned his way into the 'Run for the Roses' on the Japan Road to the Kentucky Derby by finishing fourth in the Hyacinth in Tokyo and second in the Fukuryu at Nakayama earning 19 points, good for fourth in the standings. When the top three finishers in the table in the Japan Road to the Kentucky Derby, who were not Triple Crown nominated, denied the invitation, it opened the door for Master Fencer to compete at Churchill Downs.

With his seventh-place finish [elevated to sixth following the disqualification of Maximum Security], Master Fencer bested the effort of two previous Japanese-based horses in the Derby topping Lani [9th, 2016] and Ski Captain [14th, 1995].

A start in the Belmont Stakes will make Master Fencer eligible for NYRA's $1 million bonus offered to any Japan-based winner of New York's most prestigious race.

Introduced for the 2017 Triple Crown season, the entire $1 million bonus would be awarded to the winning Japanese horse's connections in addition to the $800,000 winner's share of the purse for the last and longest leg of the Triple Crown.

With the 151st running of the Belmont Stakes as its centerpiece, the 3-day Belmont Stakes Racing Festival, from June 6-8, will include 18 stakes races over the three days including an unprecedented 8 Grade 1 races on Belmont Stakes Day, June 8.