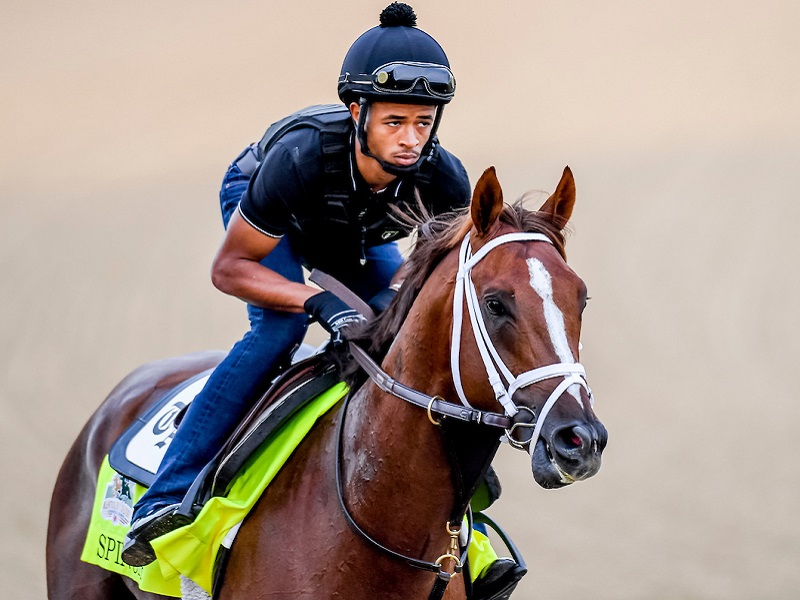 ELMONT, N.Y. - Trainer Todd Pletcher added Spinoff to the list of probable entrants for the Grade 1 $1.5 million Belmont Stakes after an 18th place effort in the Kentucky Derby.

A Wertheimer and Frere homebred, the 3-year-old son of Hard Spun didn't take to the sloppy track conditions in the Derby, according to Pletcher who said that the horse has been training forwardly since then.

Spinoff recorded his first breeze since the Derby on Sunday morning with a half-mile work in 48.72 seconds.

"He worked well and seems to be training forwardly," Pletcher said. "He didn't seem to care for the surface on Derby day. He put himself in a decent tracking position, but when it was time for him to turn his head he just kind of spun the wheels a bit."

Prior to the Derby, Spinoff was a game second to By My Standards in the Grade 2 Louisiana Derby at Fair Grounds. He was an impressive 11 ¾ length winner of his 2019 debut, which took place on February 22 at Tampa Bay Downs.

Also targeting the Belmont from the Pletcher barn is Grade 3 Peter Pan third-place finisher Intrepid Heart, who was slow coming out of the gate in the local prep for the Test of the Champion and finished six lengths behind winner Global Campaign as the heavy favorite in his stakes debut.

A winner of his first two career outings, Intrepid Heart is by Tapit - who has produced three of the last five Belmont Stakes winners in Tonalist (2014), Creator (2016) and Tapwrit (2017) - and also is a half-brother to Commissioner who was a close second behind Tonalist, both are out of the graded stakes placed Touch Gold broodmare Flaming Heart.

"He stumbled coming out of the gate but he's still lightly raced," Pletcher said. "I thought he galloped out well. He's bred top and bottom for the distance and I'm optimistic that his pedigree will allow him to get the distance."

Pletcher stated that both Spinoff and Intrepid Heart, along with Grade 2 Godolphin Mile winner Coal Front will all work Saturday morning. Owned by Robert LaPenta and Head of Plains Partners, Coal Front is pointing to the Grade 1 $1.2 million Runhappy Metropolitan Handicap.

Pletcher also spoke of Bellavais who is targeting the Grade 1, $700,000 Longines Just a Game after a fifth-place finish in the Grade 1 Jenny Wiley at Keeneland. The chestnut daughter of Tapit is out of stakes-winning broodmare La Cloche who is a half-sister to Grade 1 winning millionaire Winter Memories. Both are out of Memories of Silver who also is a Grade 1-winning millionaire.

Owned by Bortolazzo Stable, Bellavais became a graded stakes winner in her 2019 debut which took place in the Grade 3 Marshua's River over the turf at Gulfstream Park.

Previously trained by Jimmy Toner, Bellavais was acquired by her current owners for $485,000 at the Keeneland January Sale in 2018. She made her debut for Pletcher and Bortolazzo Stable a winning one in an allowance event over the Widener turf course at Belmont Park last October.

"I thought her first race for us was a good one," Pletcher said. "Ideally, she would appreciate a firm ground. It's a tall ask and it should be a deep, tough race but when she's on her 'A' game she's up for the task."